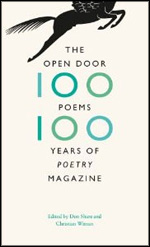 The blurb tells us that Poetry magazine was founded in Chicago by Harriet Monroe in 1912, and that is it ‘the oldest monthly devoted to verse in the English-speaking world. The magazine established its reputation early by publishing the first important poems of T.S. Eliot, Ezra Pound, Marianne Moore, Wallace Stevens, H.D., William Carlos Williams, Carl Sandburg and other now-classic authors. In succeeding decades it has presented often for the first time – works by virtually every major contemporary poet.’

And this book, with its one hundred poems selected by Don Share and Christian Wiman from the first one hundred years of Poetry magazine’s publication, is alarmingly varied. In its pages you can feel the ambiguity that has dogged the magazine’s reputation for all that time. Yes, it’s good, yes, everybody reads it, yes, everybody who’s anybody wants to be in it, but what does it stand for?

The book’s title derives from the famous ‘open door’ policy of its founder, Harriet Monroe, which ‘remains the most succinct statement of Poetry’s mission: to print the best poetry written today, in whatever style, genre or approach.’ The word ‘best’ is the worry: it simply does not fit alongside the following phrase ‘in whatever style, genre or approach.’

After all, when absolutely everybody is welcome to come to the party, to enter via that generous ‘open door’, is it really that much fun to go? It might be better fun to sneak off to a more exclusive party at a ‘secret location on the lower East Side’ (the title of a Granary Books publication about the New York poetry scene, 1960 to 1980)?

The Introduction is not titled ‘Introduction’, but a more pretentious ‘Mastery and Mystery: Twenty-one Ways to Read a Century’. The two editors tell us that early on they ‘would focus on poems, not names’. Oh, really?

But the real thrust of the editor’s aim soon appears: ‘In the American public imagination, though, poetry has a hothouse tinge to it … We have exalted poets whose verbal and associative skills are immense but who have, finally, not very much to say.’ So, no John Ashbery taints these pages. He may have fooled those East Coast sissies for decades, but not us tougher nuts from Chicago.

And how many of the USA’s three hundred million people resent that magisterial ‘we’ in ‘we have exalted’. I don’t even live in the USA, but I resent it.

And I am concerned by the certainty the writer shows about ‘the precarious marriage of loneliness and communion that marks any authentic love.’ It’s arguable that words like ‘authentic’ should be avoided by poetry anthologists because it betrays the prescriptive nature of their arguments, but there’s no argument, surely, that ‘ineluctably’ should be shunned as the ugliest word in the dictionary. Yet here it is, in the Introduction, not once, but twice.

Talking of the missing Mr Ashbery, any review of this book has to begin with the blunder that stares out at the bewildered reader from the Contents page. On page 151, we are told, we shall find the John Ashbery poem ‘El Dorado’. Turn to the page and you will find instead Frank O’Hara’s poem ‘Chez Jane’, with its tiger pissing into a ‘white chocolate jar full of petals.’ It’s an alarming image and a powerful poem in the manner of Mallarmé, contrasting music and ‘the brute beast’, the white jar and the hiss of urine, the ‘whisper of steam [that] goes up from that porcelain / urethra. “Saint-Saëns’ it seems to be whispering,’ but where has Mr Ashbery gone? You can look for Ashbery’s name in the Acknowledgments pages and in the list of contributors, but you will not find it, except as a friend of Frank O’Hara, and as his fellow member of the group ‘known, jokily, as the “New York School” of poets’.

The Ashbery poem did appear in Poetry magazine, in March 2009, and opens with the line ‘We have a friend in common, the retired sophomore.’ You can find it easily enough on the Internet, at the Poetry Foundation’s site – they are the publishers of Poetry magazine, from which this anthology derives – so it is not entirely lost to us. It tells us, if we want to know what living is all about, that ‘Living is a meatloaf sandwich.’ It needs the ketchup of literature, perhaps, to be really tasty.

Does Mr Ashbery’s absence matter? Not really; the O’Hara poem is excellent, and it’s hard to imagine any poem supplanting it, even an Ashbery poem about meatloaf sandwiches. But it does point to a surprising lack of care.

Reflecting on the matter, it is easy enough to mess up a Contents page, yet I have never seen a broken one before, and I have looked at thousands of poetry magazines and anthologies.

Many noted names appear here without the poems being particularly memorable: Marianne Moore, Rita Dove, Cid Corman, Lorine Niedecker, John Berryman, and H.D. (Hilda Doolittle). But of course there are many excellent poems in this book, and of course it is worth having this anthology for them alone. (Dates in parentheses show the year of each poem’s publication in the magazine.) There is Ezra Pound’s ‘In a Station of the Metro’ (1913), T.S. Eliot’s ‘The Love Song of J. Alfred Prufrock’ (1915), Isaac Rosenberg’s ‘Break of Day in the Trenches’, (1916), Weldon Kees’s ‘From ‘Eight Variations” (1942), Ed Dorn’s ‘Dark Ceiling’ (1964), and Donald Justice’s ‘Men at Forty’ (1966).

John Tranter has published over twenty collections of verse. His collection Urban Myths: 210 Poems won a number of major prizes. His latest book is Heart Starter (Puncher and Wattmann, Sydney, and BlazeVox, Buffalo, 2015). He is the founding editor of Jacket and of JPR.

View all posts by John Tranter on Cordite →