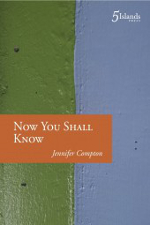 Now You Shall Know by Jennifer Compton
Five Islands Press, 2015

Jennifer Compton’s ear and predilection for the colloquial is one of the threads linking the poems in this latest collection of apparently autobiographical works. Poems further cohere around irony, sometimes translating as humour. There is reflection triggered by the death of her mother in the opening sequence, culminating in a rustic philosophy that questions mortality within the context of the natural world in the final act ‘… somehow urgent’:

Now You Shall Know is divided into sections or acts (titles derived from poems in those sections) and address bereavement, alcohol abuse, family life in the suburbs, travel, gardening and ageing. These memoir poems are neither sentimental nor maudlin, but instead are infused with vitality. This collage of free verse by a New Zealander is vintage Aussie larrikin at times, and can nuance the voice in another era. In ‘As Far As Dandenong’ a new arrival is lost and tries to ask for directions in broken English.

The poet’s skill as a playwright informs what feels like a multi-act drama. In vignettes on human folly, shock and loss the poetry draws attention to itself in the use of interjections and direct quotes where the lyrical and profane rub up against each other for effect. In ‘The Drink’ a memory unravels in a wave of watery metaphors, long vowels and hard consonants; the poem hinged on ‘and the rivulet’:

Choice of the word ‘idiolect’ so close to ‘idiot’ that it cannot be mistaken for some feeling towards the subject, like the poet’s love of the sounds and rhythms that language affords in verse like Compton’s.

We are drawn into unpunctuated theatrical streams of consciousness in ‘oh yes’ and ‘oh well’; both poems are pacy, fragmented and capture the chaos of the domestic with surprising constructions in ‘… the news was very hideous’ (‘oh well’). There is musicality in the consonance of ‘critical mass’, ‘nicholas on her tit’ and ‘big raw mess’ with its final lines of: ‘then a polish woman with a fuckyou face said to my nakedness/ hold still pls’ (‘oh yes’). Snappy phrasing and end-stopping render these poems easily digested although a rereading helped to fix the tone in context in ‘oh yes’ and the ‘polish’ did make me do a double-take. The overt echoes and chiming that characterise much of the poetry here might be deemed intrusive in some contemporary circles but are executed with a kind of ‘I’m having fun’ and ‘This is what I do’ attitude which takes it out of forced metre and into another sphere altogether. The same goes for a rogue employment of cliché in some poems and a rebel telling and loose quality in the monologue ‘The Narrative Arc of Christchurch’: ‘… How I wept. I wept buckets.’

Scene-setting in the first stanza of ‘The Craic in the Bar’ seems overwritten, but Compton’s lines can also be taut and startling as in ‘a thrusting vernacular of blue’ (‘Pink Forget-Me-Not’ ) to describe the flowers. There is accessibility and dexterity in this range that gives the whole collection an energy while concurrently diluting the more sombre and philosophical works.

The title poem, among the more demanding and rewarding for its complex imagery and language play, where an airliner, aria and ambulance are juxtaposed to create a sense of containment, performance and urgency as the death of the mother seems imminent, works well: ‘… Something tells me she is about to throw/the performance of her life’.

Significant events like those surrounding the death of a parent put us in some kind of limbo before the crash. Compton’s notion is captured truthfully in ‘… we seem to inhabit a thrumming stillness, but we believe we are travelling/ forward,’ its use of the present participle achieving the feeling of movement. ‘Clever’ is a word that crops up three times in Now You Shall Know which is arresting not only because of repetition, but because it plays into the title of the collection and foreshadows a similar element in the penultimate section ‘… wrenched backward …’ in the poem ‘Free Books’ where ‘Someone had said to my mother that/ I was a clever little girl …’ These lines suggest a rift, a lack of understanding, with the ‘little’ giving a sense of vulnerability.

Poems in this collection seem predicated on what the mother failed to understand ‘I read that poem … I didn’t know ’ (‘Now You Shall Know’) and what becomes known is revealed by the poet through remembering. Compton’s use of the word ‘clever’ seems to signify less a garnering of knowledge and more a gaining of wisdom.

This entry was posted in BOOK REVIEWS and tagged Jennifer Compton, Julie Maclean. Bookmark the permalink.
Julie Maclean lives on the Surf Coast, Victoria. She is the author of Lips that Did (Dancing Girl Press, US, 2017), To Have To Follow (Indigo Dreams, 2016), Kiss of the Viking (Poetry Salzburg, 2014) and When I saw Jimi, (Indigo Dreams, 2013).