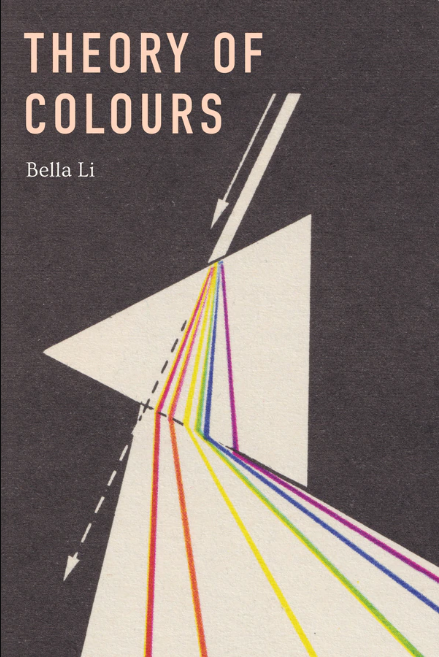 Bella Li’s hybrid poetics of text and image are instantly recognisable. Her third collection Theory of Colours follows on structurally and stylistically from her well-received earlier works: Argosy (2017, Vagabond Books) and Lost Lake (2018, Vagabond Books). Here, as with her previous collections, alchemical concoctions of form and genre blend source materials into sequences with a commitment to the surreal and uncanny. Theory of Colours extends this eclectic approach into what is arguably the most thematically cohesive collection Li has published thus far, delicately threading abstraction and narrative immersion. It is a meticulous book-object, with her attention to detail extending even to the design of the cover and internal typesetting.

The collection’s title is borrowed from poet and polymath Johann Wolfgang von Goethe’s 1810 treatise. Goethe’s Theory of Colours is a renowned historical oddity: part challenge of Isaac Newton’s physical theory of light and colour, part catalogue of colour experiments, and part philosophical reflection on the experience of colour. Goethe’s ‘theory’ is less scientific and more perceptual – his colour wheel contains a subsection for allegorical, symbolical, and mystical applications of colour. In contrast to the Newtonian view of colour as a subset of white light, Goethe argues that colour is the result of interactions between dark and light, and that ‘colour itself is a degree of darkness’.

Just as Goethe sees colour as emergent from the mixing of light and dark, Li’s readers find meaning and appreciation in the recomposition of contrasting elements and forms. Absence, and what we piece together in its stead, runs as an underlying theme across the book’s three sections. In the first and titular section, Li relates Goethe’s perceptual colour theory to photography and ghost stories. ‘Coloured Objects’, the entirely visual opening poem, consists of nine image collages in sequence. Each image juxtaposes colour theory diagrams and block colour swatches with black and white photos of drawn from a historical overview of New Zealand photography: sweeping natural vistas and portraits of well-dressed people sitting for the emerging technology are subsumed by the schematics of colour, obscuring faces and bodies and sometimes whole landscapes. One double-fold shows men in suits pose for a group portrait, their faces almost entirely obscured by coloured index tabs. In a later spread, women in light full-length dresses stand in a field of daisies, their bodies all but obliterated by a triptych diagram visualising the phenomena of refraction, where light through a prism splits into its composite colour frequencies.

In this quietly striking poem Li deploys several inversions that grapple with absence. Most prominent is the striking contrast between the black and white photographs and the bright yet constrained colour palette of the interpolated images – the subjects drained of colour by the technology of the early camera are refracted back into colour, but illegibly so. The title too suggests an inversion of the ‘subject’ nominally linked to the portraiture style dominant in the late 1800s; in this visual bricolage they are now objects, mere embodiments of colour phenomena in a scientific positivist lens.

Considering the Aotearoan context of the source images, a colonial spectre pervades this inversion. The early history of photography is interwoven with that of the racial sciences that pervaded the colonial empires of Europe in the late 19th and early 20th centuries. As advances in physiology challenged the reliability of human visual perception, photographs were purported to depict an empirical truth that was frequently used to justify notions of racial superiority and the wider colonial apparatus. When ethnic or Indigenous minorities were represented on film, it was typically either as evidence for racial science purposes or as an idealised exotic figure to export back to the white motherland. This exclusion has been continually baked into the technology of photography itself, from the ‘Shirley card’ swatch of a white woman which was for decades the sole measurement for colour photo processing to the computer vision algorithms which misidentify non-white faces due to their omission from data sets used to train these algorithms. Placed in this context, ‘Coloured Objects’ emphasises photography as a vehicle for the erasure of Indigenous culture by forming an erasure of the idyllic colonial vision itself. The well-to-do European subjects of this poem are engulfed in colour theory, transformed into objects of pseudoscientific obsession. This anticolonial reading is no doubt shaped by Li’s renowned poem ‘Pérouse, ou, Une semaine de disparitions’ in her first collection Argosy, which Aden Rolfe suggested ‘can be read as a kind of Pacific revenge against Europe, the natural world reclaiming the civilised, the colony subsuming the coloniser’.

Pages: 1 2 3
This entry was posted in BOOK REVIEWS and tagged Bella Li, Rory Green. Bookmark the permalink.
Rory Green is a writer, editor and digital media artist living and working on unceded Gadigal land. Their interactive digital poetry has been presented at festivals including BLEED and Cementa, as well as published in Cordite Poetry Review, The Lifted Brow, Running Dog and Taper among others. They previously edited Voiceworks Online, a publication for experimental digital writing by young Australian writers, and facilitated Express Media’s online learning program Toolkits: Digital Storytelling. Rory’s debut chapbook the attentions was published in 2022 through Slow Loris. Their current ongoing project is to write a poem for every Pokemon via the email newsletter Otherwise Pokedex.