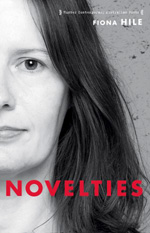 In Lacanian theory, ‘matheme’ and ‘patheme’ share an interesting correlation. While the matheme is, obviously, on the side of science, the patheme is part of the ‘logics’ of affect, whereby the body is an effect of language. Matheme and patheme don’t immediately have anything to do with sexual difference or ‘mechanistic’ versus ‘organicist’ understandings of the universe. There is nothing mysterious about the patheme. Rather, the patheme could be thought of as what the poem does to the poet’s body analogously to what a matheme does to a mathematician’s body: force it to work and, in some cases, give it pain.

Fiona Hile’s new book, Novelties, announces her poetry to the world as a pathematical tornado from the steppes. Many of these are about bodies, love, nature and torture, but probably not in the way that one expects. ‘Nightingale with Zombies’ is one of the most beautiful nature poems I’ve ever read, precisely because it acknowledges that nature does not exist. Do I want to know what’s going on with Fiona and Francis Bacon and empiricism? Maybe that’s a simplistic reading. These poems are deeply libidinal. ‘Grand Hotel,’ for instance. What did Plato say about poets? Indeed, Hile is a pathematician. The body is there, so is language, and yet something is missing, or at least subtracted.

It’s truth. If there is the possibility of writing a ‘great poem’ in our postmodern climes, ‘The Owl of Lascaux’ is it. I imagined myself or somebody else meekly poking my/their head outside the cage of idealinguistery: ‘huddled like a worthless slave in the bed of speech.’ There I was, ‘Cowering within the molecules of discontent’ with the ‘night swarms of eels wreathing indecipherable symbols’ and ‘Mouths closing over libraries’ on the underside of the law, which I took to be my own polymorphous perverse. Born (again) into the slavery of language, my ‘narcoleptic fuselage’ shook with ‘bloated fecundity.’ The horror of this poem is still with me now. ‘Goodbye Oedipus split into one’: yes, that line – from a different poem – might save you too. As arch poet-villain Francois Villon said ‘I know all things but myself.’ Some of these poems know much more about you than you do yourself. There’s never any irony, as far as I could tell:

Flying in the face of today’s cynical reason, one must take these lines seriously. Where today can we find a commitment to novelty, that is, to the blazing worlds of the impossible, the new, when the world constantly tells us that what is ‘new’ is really to keep doing the same things the capitalist pigs tell us to do until we die in a pile of our own debt? This question is, and I mean this in no ‘cryptic’ sense, precisely the same as asking: What if Lucretius gave up on his materialism? It’s much more simple (and hence much more complex): one must not give up on one’s desire. How? By severing ourselves from the world through truth. The ‘end’ of ‘Hello Darling’:

is said perhaps better even than the philosophers, which of course threatens Hile’s place in the City. Maybe that’s why Bacon is spoken of from Blacktown and Rooty Hill. Further North, in ‘Entrances North’:

I heard thought in sought, and maybe rightly so. This bag of poetry carps all tunnels. Whether it emerges from the belly of the premodern, the courtly imagination, or out of the stomach of post-aniseed Romantics, it deserves your homuncular vitality. Novelties is absolutely singular poetry. This is not just poetry engaged with thinking, this is poetry which is the presentation of thought itself. It opens holes in knowledge and subtracts truths, far too many to list here, and truths no doubt that await us still.

Poets, beware: a figure like Milton or Lucretius walks here among us!

This entry was posted in BOOK REVIEWS and tagged Andrew Carruthers, Fiona Hile. Bookmark the permalink.
a j carruthers is a poet, performer, critic. Recent works are Axis Book 2, the recorded sound-poem Consonata, and visual works all published in Canada: MS Word Variations 1-11, EPSON L4168 consonant studies (Banff: no press) and The Blazar Axes (Calgary: Spacecraft). Is working as Assoc. Prof. at Nanjing University, in China.