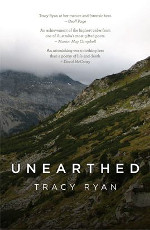 Tracy Ryan’s seventh full-length collection of poems, Unearthed, comprises of an extraordinary series of elegies and elegiac poems. The elegiac mode here is both intimate and epic in scale. These poems commemorate the most private moments shared with lost lovers – those times ‘relished and wasted’ (12), ‘snug’ in ‘coffin-dark’ beds (32) – as well as the ways in which our inhabited environments – mountains, the plant and animal worlds, even glimpses of the moon – are ghosted by the dead. Indeed, Ryan’s quiet but insistent acknowledgement of the past’s ‘proof of persistence’ (79) is the legacy of this astonishing book. ‘The dead are busy’, as the final poem, a translation of Rilke’s ‘Requiem for a woman friend’, calmly and powerfully announces.

Ryan’s poetry has been compared to that of Sylvia Plath’s, but it is Ted Hughes’ elegiac work for his ex-wife, Birthday Letters, that Unearthed calls to mind. The first half of the collection contains poems remembering a first husband, Swiss-German by origin, now deceased, who continues to haunt Ryan in dreams. Sleep is configured as a state of honesty – ‘what I was / when all sham fell away’ (14) – and this is a book of rare and confrontational honesty. Given that Ryan has re-married and ‘moved on’, the topic of her recently deceased ex-husband is inconvenient; indeed, that past relationship is ‘obscene / with lost intimacy’ (47). The subject of these poems is conventionally improper. Nevertheless there is the ‘unexploded ordnance’ (18) of objects from Ryan’s former life that remain in her present home: a hole punch, a stapler, two dinner plates. There are the memories that she carries of another body, of another’s language, of another’s words. There is also an acknowledgement of the ways in which we can damage those we love; the ways in which ‘we / who idolise may also desecrate’ (17).

Unlike Hughes’ Birthday Letters, these elegies for a former partner are recuperative rather than vindictive, respectful rather than spiteful. There is no game-playing here: no claims to victimhood, no exploitation, no sensationalism. The subject is handled with the utmost care. This is apparent in the fact that the elegies for her ex-husband begin with a playful apology to Ryan’s current husband, ‘The thousand goodbyes’:

The elegies in the first half of the book conclude with a poem called ‘Brag book: seventeen years’, in which Ryan honours her current ‘largesse of life’ (67).

The second half of the collection contains a series of further elegies and elegiac poems, which are marked by a similar sensitivity and precision of vision. There are poems about deceased friends and colleagues. Furthering ghostly connections with the poetry of Plath and Hughes, there are poems about foxes and bees, though these subjects are less opportunities for narcissistic or metaphorical reflection – Ryan rejects ‘the past neatness / of the bee-box’ (85) – than evidence of Ryan’s abiding respect towards everything living, with which we share our mortal condition. ‘Doubles’, a beautiful and powerful poem, offers us a vision of death as our twin, to which we are intimately bound. It is the ‘strangeness in our skin’ (100), but it is also present in our interconnectedness to our parents, children, siblings and lovers. The book offers a profound vision of the systematic interconnectedness of all organisms, from human life to the soil, which is envisioned as ‘shockingly pubic’ and ‘the cold foundation / power of life and death’ (91). As ‘Doubles’ memorably asks, ‘where do we end   and where begin?’ (101).

The elegies and elegiac poems of Unearthed expose how death renders life precious and tragic. Because of death, life – lives – demands recognition. All grief settles ‘as the earth settles on an old and unmarked grave’ (60), but for Ryan even a dead fox is ‘something / I have to remember, make room for’ (83). The dead – or the living – require the respect of our attention, as does this humane and remarkable book.

This entry was posted in BOOK REVIEWS and tagged Maria Takolander, Tracy Ryan. Bookmark the permalink.
Maria Takolander is the author of three books of poems, The End of the World (Giramondo, 2014), Ghostly Subjects (Salt, 2009) and Narcissism (Whitmore Press, 2005). A fourth collection, Trigger Warning, is in press with UQP. Her poems have been widely anthologised and translated, and she has performed her poems on ABC TV and radio, and at national and international festivals. Maria is also a prize-winning fiction writer and the author of a book of short stories, The Double (Text 2013). She is an Associate Professor in Writing and Literature at Deakin University in Geelong, Victoria.