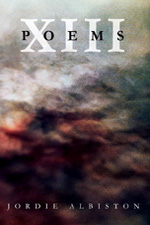 XIII Poems might be seen as a snapshot of what Albiston’s main concerns have been since Botany Bay Document (1996) appeared culminating with, I think, Vertigo (2007). Her publications since the mid-2000s reflect on similar concerns but with more biographical tones. Albiston’s main interests have been history, limitations or framed lives, their voices and interpretations of them, often using easily located words to tie groups of poems (‘heart,’ ‘black,’ and ‘white’ feature in XIII Poems).

These Albiston poems, however, have arrived with a stated purpose to them. XIII Poems has been published as the first volume of Rabbit Poets Series of ‘non-fiction’ poetry books, raising some old questions about the relationship between artistic intention and works of art as constructed artefacts. I tried to find a way into the issue via Anthony Savile’s 1969 essay to which I keep returning, ‘The Place of Intention in the Concept of Art.’1

What draws me to Savile’s essay with regard to XIII Poems is that the book is primarily a collection of work commissioned, written for special occasions, in response to already existing works of art, used in new work by other artists or published in themed collections, and organised here in a certain way. As well, in XIII Poems, the whole text includes what the poem is about (its title tells us that), where the poem has been (its publication history tells us something of that). That background may be what Savile regarded as a creative work’s ‘strings’ or provided contexts to which spectators or readers have access and may be expected to help them understand the work; in other words, an objective or optimal interpretation ‘offered of a string’ of connections into the creative work. Furthermore, Albiston’s poems’ relationship with other forms of art also adds to a string that ties the text to a way of pointing to artistic purpose and helps us as readers understand in some way the achievement of the poems. Albiston helps readers into each poem ‘by way of a standard-context,’ to use Savile’s words.

Perhaps Rabbit is attempting to draw the attention of reluctant or ‘sceptical’ spectators (as Savile puts it). In his essay, Savile wanted to make the point that although we may agree that ‘works of art are intentionally constructed artefacts’ the sceptical spectator might say that the construction of art ‘is of little significance.’ Savile’s sceptical spectator would want to include the way we appreciate the natural flower with our appreciation of a poem about a flower. He holds that artistic intention has its place in determining aesthetic (however you define that) value in a work of art per se.

For, one, the art object appears to achieve more aesthetically than the natural flower since art objects may have been transmitted to us by the artist as a work intentionally making a philosophical statement, a statement of protest, contradicting existing ideas, creating a deliberate imbalance by isolating one thing over another for emphasis; those are qualities that we cannot attribute to the flower. And, two, if the artistic work fails because the artist was not able to convey his or her intention successfully or as Savile puts it, there is ‘dislocation’ between artist and text and as believed by the reader or spectator, there must be some clear way to an objective reading of the text.

In any case, where the artist’s intention and achievement do not seem to match up for the reader, Savile suggests perhaps we should regard the dislocation, in fact, to be a mismatch between desire (rather than ‘intention’) and act or achievement of the work, for we may place the responsibility for bringing objective strings to the reader squarely on the writer.

As Kenneth White puts in ‘Poetics of the Open Universe’ on the discovery of one’s reality: ‘The thrust is … to try by some other means than ‘pattern’ and the ‘rational’ to cause discourse to cover—as it only ever best can—the real.’ Ultimately, the aim, White notes, is ‘to work it all out in order to get through to a space, a whiteness, that is not just that of plum flower or of morning sun: a whiteness of the world, and of self moving in that world, really beginning, and always beginning?’

This entry was posted in BOOK REVIEWS and tagged Bev Braune, Jordie Albiston. Bookmark the permalink.
Dr Bev Braune is interested in practice-led research in poetry and theories of literature. She completed a Doctorate in Creative Arts (UOW, 1999) in the areas of Epic Poetry and Old Norse Poetry, its history, criticism and translations into English, with the first part of her poem Skulváði Úlfr. Her related areas of interest are reader theory and aesthetics. She brought out a book poems on the search for beauty entitled Camouflage. Excerpts of her thesis appeared in Cordite and other journals, such as Sulfur 44: Anglophone Poetry & Poetics Outside the US and UK and Salt 15: An ABC of Theory & Praxis.