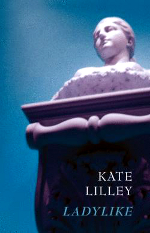 Kate Lilley’s second collection, Ladylike, is a tightly constructed and complex work on love and language. Reminding me of Welsh poet Gwyneth Lewis’ wry, poignant words concerned with Welsh language, use of English and meaning-frauds, Kate Lilley enlivens her readers to assumptions, contradictions and the various erections of judging behaviour that surround the definition of a woman today or in any recent age.

Lilley situates her real self at the centre of telling schemes about love and its expressions as part of women’s experiences. Essential to that is a thesis on the love of women for other women as the real thing: not a fake or affectation; all that, at least, makes the speaking voice created in Ladylike a real person. It pays homage to loves gained and lost, to obsession, to those who challenge social mores related to matters of love and marriage and, above all, to the love of a daughter for a mother. Indeed, to understand the rule of the basic notion, woman, as daughter in the context of Lilley’s use of the words mother and daughter is to get to what I think Lilley is really on about in Ladylike.

Lilley’s opening conversations with her mother are key to understanding her choice of the stories of Mary Carleton’s frauds, Sigmund Freud’s deviants and Silas Weir Mitchell’s nervous subjects. That is to say, these opening conversations are fundamental to understanding the collection as a whole and, in particular, the book’s last sequence ‘Round Vienna’. The way Lilley retells those stories brings Lewis to mind again. I am referring especially to Lewis’ use of narratives, language and rhythms; her use of third person narrative and parable alongside first person reports and copies of personal events or ‘fax’, as Lewis puts it,1 in the play between Welsh and English translation. As well, in her subterranean use of the subjunctive ‘I’, Lilley compounds Lewis’ concerns: if I were you, then I … Each voice offers its own reality (historical, fictional or both) in combinations of modern English, French, Gaelic and archaic copies. There is no obvious self-confession here. Lilley, I believe, intends to communicate, to stand in someone else’s shoes, testing the strength of the position of her mother, her lovers, versions of herself, Mary, Dora, Sidonie, Marie, Frau Emmy von N., Miss Lucy R. and the subjects of Mitchell’s fat-and-blood-with-tough-love rest cures.2

Lilley plants clues to the testing of those voices all through the collection. She expresses her own voice in the dedication to Melissa and her many names, in her homage to her mother, Dorothy Hewett, and in the introductory ‘Fifty Minutes’ and ‘Cleft’ series.

Alongside these, there are the doings, undoings and undones in her ‘The Double Session’ sequence. ‘Where does a woman’s sympathy end/ and her indiscretion begin?’ (‘The Double Session’, 25) In that sequence, self-definition, identity and the pursuit of sexual satisfaction stir strong emotions, threatening speechlessness at times: ‘I’ll give you the benefit and take it back/ like the yellow scarf I knitted and unknitted’ (‘Rhapsody’, 4). In ‘Round Vienna’ Lilley includes the voices of figures from Freud’s case studies on hysteria and female homosexuality where you might say all the trouble with ladylike-ness took root, in terms of modern interpretations of how we regard a woman’s behaviour.

To understand where Lilley might be taking us as readers, it is probably best to begin the collection in earnest by looking at the sequence from which the volume takes it title, ‘Ladylike’. Lilley’s succinct notes at the end of the volume point us to her essays and other writings on the subject of this series, Mary Carleton. Lilley suggests Mary’s worst ‘crime’ may not have been bigamy or theft but the pretence of being a lady (of royal German heritage). Mary successfully defended herself in an English court against bigamy but was executed in 1673 on another charge, breaking her sentence for theft: transportation to Jamaica for ‘correction’. Mary won the case against bigamy with an apparently convincing demeanour. She presented a case that someone (like herself) of such ladylike appearance and history could not be guilty of the unladylike action of bigamy or falsehood. In a sense, she was saying that if she looked the part, she was the part, preceding Jean-Paul Sartre’s notion of ‘bad faith’ in a clever manner.3 Sartre, using the examples of a woman on a first date, a waiter, and a homosexual, described bad faith as a contradictory way of being, a self-deception, where we are ‘what we are’ as well as ‘what we are not’. In other words, a person may act as one thing, but separate him or herself from the false act by acting as if he or she is not in his or her own body. Such people simply describe themselves as being ‘different’. Even here, though, Lilley reminds us that Mary is bound to fail. Whereas, the Sartrean waiter might have recourse to the public ceremony of being a waiter, Mary (in being a woman) is caught in the ‘one woe’ that ‘courteth another’; for, ‘[a] woman hath no clergy’ (51). The irony was that, to win her bigamy case, Mary had to assert that she was John Carleton’s lawful wife, which, according to the law of the times, resulted in her loss of any personal resources. That situation perhaps had a part to play in the theft for which she was later convicted.