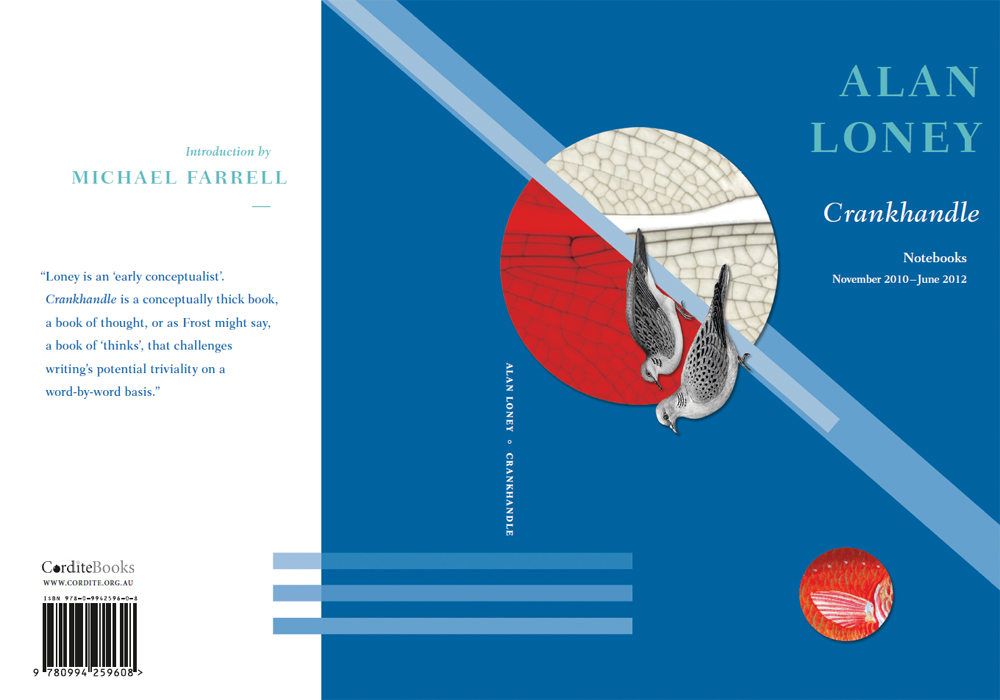 Since moving from New Zealand to Australia back in 2001, Alan Loney has carried on a prolific, internationally recognised career in Melbourne. Crankhandle, Loney’s latest published work, follows on from 2014’s chapbook collaboration with Max Gimblett, eMailing flowers to Mondrian, and the books from Five Islands Press, Nowhere To Go (2007) and Fragmenta Nova (2005). Borrowing his contemporary Laurie Duggan’s term, Loney can be read as a ‘late objectivist’: worrying at that particular American formal legacy, with its attendant philosophical and ethical concerns.

In Fragmenta Nova Loney writes, ‘“Poetry” is too small a word for the cry that issues from the mouth. “Form” is too small a word for the shapeliness of words upon the page’ (‘Poiesis’). This quote points to the uncontained – and affective – quality of much of Loney’s work, as well as to his attention to visual design. This is not an aesthetic concern only, but one that enables reading: lucid aspect as well as articulated ‘cry’. Elsewhere, Loney has characterised his writing in successive modes as a practice uninterested in ‘perfect individual poems’: ‘If the poem’s an imperfect take on the world or even part of it, better to be crisp about it, and treat writing as unfinished and unfinishable business. So, adopt a framework, write for a while, then stop. It isn’t, of course, quite as simple as that’. Perhaps then, Loney is an early conceptualist. Crankhandle is a conceptually thick book, a book of thought, or as Frost might say, a book of ‘thinks’, which challenges writing’s potential triviality on a word-by-word basis.

A writing motto appears about a quarter of the way through:

The word ‘crankhandle’ suggests revving up but also letting go: write, then think. In a 1997 interview, Martin Harrison said, ‘I think the age now is of living systems.’ Loney, in the book’s epigraph, refers to antiquity’s knowledge of the writing system. Writing is part of that living system: as both noun and verb. Traces of Greek mythology recur in this book – as do other pre-contemporary traces – yet these are not necessarily allusions, but an attempt to find a place for a history of writing. Writing as an activity of the body, which may or may not end up in a book. Like a beach, ‘a book is a public place’.

Crankhandle contains double or parallel texts that recall Anglo-Saxon or indigenous traditions, like the Maya, where translation is what produces poetry.

Though the desire for words in space is cited, this space both includes and extends beyond the mind: ‘dragonflies above / goldfish below’; ‘dead possum / on the nature-strip’. An Australian source is suggested for writing, voicing and quoting: ‘but with lyrebirds about / you wouldn’t know / who’s talking’.

Crankhandle is a late book in that the sense of both individual and social self recedes: ‘the “my” of “my library” / where did it go’; ‘no longer care / what others think poets ought / to be doing’. Signifying closure, Orpheus as spider descends onto the last page of the notebook: the poem’s over. Or perhaps, in our minds,
not
quite
yet.

This entry was posted in INTRODUCTIONS and tagged Alan Loney, Kent MacCarter, michael farrell, Zoë Sadokierski. Bookmark the permalink.
Michael Farrell's I Love Poetry and A Lyrebird: Selected Poems are both out this year (2017): from Giramondo and Blazevox, respectively. His scholarly book, Writing Australian Unsettlement: Modes of Poetic Invention 1796-1945, was published by Palgrave Macmillan.


More by Michael Farrell on Cordite Poetry Review →
Zoë Sadokierski is a Sydney-based designer and writer. She has designed more than 250 books for various Australian publishers, and is Vice President of the Australian Book Designers Association. Zoë lectures in the School of Design at the University of Technology, Sydney, where she runs the Page Screen research studio, experimenting with publication models for limited edition print and digital books. She also writes a column on book culture and reading in a digital age for The Conversation.