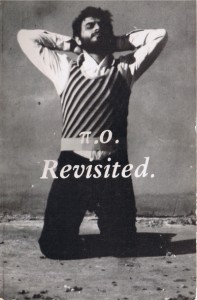 Pi O was born in Greece (1951) and raised in Fitzroy, Melbourne. A founding member of the Poets' Union, he has edited books of poetry such as Fitzroy, 925, Missing Forms (1980) – a visual poetry anthology, and Off the Record (1985) – a performance poetry anthology by Penguin. In the same year, he toured the United States and later performed in Colombia. Pi O is an Anarchist. Fellow insurgent Brad Evans interviews Pi O via email for your re-education.

Where were you born?

I was born in 1951, in Katerini Greece. I came out to Australia in 1954/5? We were sent to Bonegilla (migrant camp) and escaped three week later and ended up in Fitzroy.

What is your current occupation?

I'm a draughtsman. A public servant. I'm against poverty. Dying for your ART is a bad job description. I'm making sure I've got food in the frij and a roof over my head.

Do you have a religion or unique system of beliefs?

I don't like religion, but like some of the rituals, ie something to do on the onset of death of someone close – it helps the time pass. Rituals ARE important – we don't do enough of them.

What is a poem to you?

A poem is a language complex of some sort. It's virtually impossible to describe as every time you do you find someone marvellous contradicting you??¢and it so often comes at you unexpectedly.

What makes a poem?

A miniature program that helps cut-out the furrows in the brain. A social matrix that can put the pieces together and make sense of it.

How can you tell if a piece of writing is a poem?

It gives you a hit! It does something to you that you know is different from anything else – prose, drama, etc.

Who first introduced you to poetry?

School, I guess. I loved reciting fragments of Shakespeare but it didn't go far. I remember once getting the Sonnets and explaining it for my father, ie that it took 20 sonnets just to get to kiss the girl and him saying, 'Oh, we're at that stage of adolescence are we?'

What was the first writing that moved you?

I loved the lyrics in Rock 'n' Roll, but I guess that's not what you mean. It's 'heard' no 'read' etc. I can't answer that question – I wasn't really aware what writing was – I just wanted to do something.

Who wrote those lyrics?

Chuck Berry and those of some '50s REBETIKA (Greek Blues) writers.

How long have you been writing poetry?

I began poetry in 1970 after seeing and hearing Johnny Cash recite two small religious poems (whilst tuning up) – I thought they were so bad I could do better, and I did!!

What sort of poetry do you write?

Do you have a unique style?

No. All sorts, really. I love the ability to pick up and set down whatever looked or looks like language.

Do you have any favourite poets?

I love lots and lots of poets, being influenced is my forte! A good poem can make me live off it for months, or even years! I get different things from different poets and they have values I get into or not, if not 'values' then 'vibrations' I can get into.

How do you react when you have read a poem written by someone which you feel is great?

I feel so nourished by it sometimes that I feel I don't have to eat! I love drowning in it. And I can get awfully boring telling others about it.

Can a bad poem show promise through quality lines?

A bad poem takes me into those areas of me where boredom reigns! If there is a 'show of promise' then, yes, it can be made good or good enough to stand behind.

How can you tell when you've written a good poem?

When I write a good poem I swell up inside and feel like I've done something. Great!

How often do you rework your poems?

I rewrite all the time. I go through enormous permutations and combinations of words and only settle after a long period of inactivity and/or public exposure.

What are some of the most important things that you would say to a poet who has just started writing?

My directive to young writers is: WRITE! TALK! READ! LISTEN! and be INFLUENCED!

Do you think that Australian poets are looking for publishing overseas?

I'm not really interested in overseas, ie being published there. Sure, it is a compliment, but really it's only a drop in the ocean and of no significance here or there. Concentration on Australia, on the other hand, can MEAN something and it can affect people in the way I intend the poem to affect & mean!!!

Have you ever had your poetry criticised?

Criticism in Australia is a matter of applying theories garnered from others (overseas) and applying them to us. Looking around for what will fit, not looking at what we have and deducing from that. Criticism done in reverse!! Yes, I've had criticism, but only after 28 years of writing which is ridiculous!

Do you think many young people today appreciate poetry?

They teach poetry in schools backwards, ie they start with Shakespeare (say) so that by the time you matriculate you've just reached Byron (say), instead of starting in a language of the present and being enthused into the language of our language.

In your view, does the average Australian appreciate and value poetry?

Australians LOVE poetry – it's just that the range they've been exposed to is so,ooo,ooo limited. Australian poetry is going to find itself stunned by the demands of the next century, making 90 per cent of the poetry in this century a mere footnote to obscurity.

Personally, what purpose does poetry provide for you?

The purpose of writing poetry isn't a purpose, it's a COMPUNCTION from within. I just have to do it!!

Can poetry be used as a political weapon?

All poetry is political: A FACT! When a poem is internalised (or reaches its mark) it changes you!! And the world it lives in.

Do you feel the need to be published as a poet?

I need to be published as a poet, cos those who publish have listeners and readers and access to distribution and as far as I'm concerned all poetry is a public act even when it's private, so yes!! yes!! yes!!

How many rejection slips did you receive from publishers?

I get (and have got) lots of rejection slips. What's new??

This entry was posted in INTERVIEWS and tagged David Prater, Pi O. Bookmark the permalink.