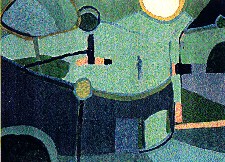 The lasting image that I will retain of Mathieu Hilfiger and Sebastien Raoul is the ever-so French portrait I took of them at the conclusion of our entretien on another biting Paris winter morning. In the photograph, Sebastien is wearing a bright red coat and black beret, and is ill shaven. Mathieu has on a black woollen coat, and a thick, grey scarf that is tied in a knot under his chin. They pose in front of the old clock in the main courtyard at La Sorbonne, one of Europe's oldest and most prestigious universities and where both Hilfiger and Raoul are completing their Masters of Philosophy. And it is from the university that they edit and publish their biannual poetry journal, Le Bateau Fantôme (Ghost Ship).

Although it has a small, primarily Paris-based distribution network, and is printed at 250 copies per issue, both editors are clearly proud of the journal, its part in disseminating poetry, and their role in promoting the fundamental ideal of attentive reading (la bonne lecture).

Journals, continues Hilfiger, are objets d'art. They are luxury items that frame ideas and forms. He flips through the pages of a copy of Le Bateau that is sitting on the table in the cafe where we are swapping words over coffee and cigarettes.

The journal itself is A5 landscape and over 100 pages long, perforated with poems, essays, and black and white illustrations. The overall aesthetic, in my eyes, approaches that of a zine; rough, vibrant. I understand his point, though, thinking of the increasingly tactile format of some Australian journals such as and the now-defunct Siglo. Then there is the French journal Fin, which I explore in my interview with Pierre Brullé.

Poetry, in France, meanwhile, depends on the proliferation of such journals, given the fundamental reluctance of publishers to deal with non-established poetics – a category that encapsulates the majority of contemporary French poetry.

A quick stop at a bookshop down the road, on Hilfiger's recommendation, confirms this seminal role. While poetry is limited to a few shelves of anthologies, collected poems from the usual suspects, and a scattering of individual collections, there is a large section dedicated to journals, from poetics and poetry, through to sociology and political science. There must be more than a hundred titles in stock, also suggestive, perhaps, of the importance of cultural debate in French society, the fact that they do tend to discuss everything. And at great length. The legends were true, as they say.

Meanwhile, poetry remains the marginalised practice in France that it is in Australia, despite a wide support for the arts by French institutions, public and private, despite embracing the intellectual side of being.

Hilfiger elaborates, pointing out that there is no espirit d'epoque, no zeitgeist, in contemporary French poetry, and very little communication between the various schools of poetry that exist.

It's still trying to find itself, suggests Raoul, in the wake of the massive literary upheavals of the past 50 years in which poets' engagement with the form has become an insular activity, separate from the wider public's traditional understanding of it; an understanding that does not often extend beyond the 19th century, as Jean Orizet also suggests.

And so the key is how to give (back) the keys to poetry to the wider public, a process, Raoul believes, that requires us to ask the fundamental question: What is poetry?

Part of the problem, he continues, is that the craft of poetry has taken on a distinct technological aspect, an adherence to rationalist notions of progress, in which the present divorces or outdoes the past, and in which to further the craft becomes the goal of craft. This in turn produces a fundamental paradox.

'You see, a technical object is designed to be used straight away,' he says. 'For example with a microwave, you have to be able to reheat your dish in one minute. A microwave that does that in three hours is not a microwave. It's useless. Poetry has a link to time that is ancient. That is, poetry is a meditative act, a rewarding one. It's not a technical object that immediately-'

'- It represents a drawn-out temporality,' interrupts Hilfiger. 'A technological object responds to the modalities of the ephemeral, that is, time and space. And it's true: you see an image on your big television and it's immediate. You consume it straight away. Poetry, no.'

Both Hilfiger and Raoul argue for a poetics that is not a space outside of space, un monde hors monde – a world beyond world, to use a French expression. They do not want poetry to exist purely in the realm of the ephemerally oriented technical. They desire one that exists as part of a tradition.

In my mind, this has two implications: 1) Poetry must revert to its “tradition” (ie the 19th century or, if we're lucky, the Beat Generation); or 2) There must be a process by which the reading public is re-integrated into the contemporary tradition thus allowing poetry to be anchored as a (re)accepted form of expression – and as a political entity.

Of course those notions raise enough questions to crash a website- Next time, maybe. Instead, I let Hilfiger conclude.

Drawing upon the French philosopher Jean-Luc Nancy and his book, La Résistance de la Poésie, whence this article derives its title, he alludes to, it appears to me, a politics of poetics and of reading: 'If there is one word for me that represents poetry, it's “Résistance.” Poetry resists identity, simplicity. It is the total, integral activity of surpassing meaning in the sense that it resists given meanings, perceived meanings.'

If this is the case, perhaps poetry can resist the obliterative, Virilio-proscribed cultural routes (rout?) that proliferate in the speed of consumption, leading to a world beyond world, towards displays of the pornographic that show everything but say nothing. Like I said, next time, maybe …

James Stuart’s first full-length collection of poems, Anonymous Folk Songs, is published by Vagabond Press (2013). His other book is Imitation Era (Rare Object Series, Vagabond Press, 2012). He was a 2008 Asialink literature resident in Chengdu, China and works as acommunications manager.

View all posts by James Stuart on Cordite →