While writing this work I have been eating wild foods, vegetables from my garden and a small amount of transported agricultural product. I am in transition, along with my family and some community friends, to relocalise food and energy resources and address the degree to which our participation in a hyper-mediated society degrades the ecologies that support us.

There can be no thought without food, and no sustainable food supply without soils teeming in microfauna and microfungi, which in turn are dependent upon a steady supply of solar radiation, water, air and decomposing biomass. Poetry, philosophy and ethics’ relationship to the landbase, and to soil microbes more specifically, should therefore be unambiguous. Why is it then that very few western schools of thought have treated this relationship seriously, if at all? The lack of attention is even more remarkable when we consider the effects that cultivating soil for food has had on society from the first technological landscapes (proto farms). It’s like we’ve been unable to witness our own separating linage, or at least respond to it with an adequate or challenging language. Rather we’ve developed a dominant Cartesian dialect able only to champion progress, the corollary of which has been ecological disembodiment, unchecked speciesism and an ever-increasing privatisation of life forms, resources, thought and creative expression.

An increasingly privatised food supply system favouring industrialised, transported and packaged product is central to global ecological crisis, central to the degradation of subsoil microbial networks, above ground biospheres, wetlands and marine environments. Supermarket food, with its reliance on industrial production methods, destroys microfauna and microfungi, is extremely water and energy intensive, and commits the atmosphere to unsafe levels of anthropogenic waste. Is the type of food we eat, therefore, contiguous with the quality of the fuel we use for poesis, for making meaning? It seems like a very direct exchange. And if we eat ecologically estranged food do we automatically make ecologically estranged thought, favouring representations, mediations and abstractions? Here’s an experiment that could well be employed to help answer this question, a question integral to examining the mental state of our culture:

Part 1. For one week eat only edible weeds, feral foods and wild food plants that you have freely foraged within walking distance of your home. Drink only untreated (non-privatised) water. Make teas from wild herbs. Record your thoughts.

Part 2. For one week eat only privatised supermarket food that has been transported from anywhere, and drink anything you can afford. Record your thoughts and make an inventory of the anthropogenic waste you produced in this time.

Part 3. Compare the notes you made between the two weeks, and publish them freely.

The establishment of a creative commons goes hand in hand with the reestablishment of a public food commons. Both are networks of exchange and interrelation, and both attend to the woes of private-industrial systems of supply. In a previous work I wrote the exchange between creativity and food within a dominant supply system like this:

The arts of industrial civilisation are intrinsically linked to industrial agriculture; that what industrial agriculture does to our bodies (and with the landbase), industrial culture does to our minds. Fairly consistently the resultant pathology is a kind of intellectual diabetes that derives from the over refinement and over processing of materials – where the seduction of the reader/spectator is paramount, the common understanding is that as long as there is food preserved by synthetics and refrigerants we can afford to indulge ourselves in transcendental medias.

The copyrighting of food seeds is a reasonably new chapter of private supply ideology. Newly available biotech seeds are modified to grow in ‘dead’ soil where microfauna and microfungi networks have been systematically killed off, and the diseases that these networks would normally allay now have to be treated with synthetic pesticides, to which the biotech seeds have been made resistant. Seeds are also being developed to ‘suicide’, so as they can no longer be saved or shared. If patented biotech seeds jump fence lines courtesy of wind – a natural transporter of seed – and take root on organic or non-GMO farms, then farmers can be (and have been) aggressively sued.

An industry that refuses to include its environment and forces people to use its woeful science is monological authoritarianism at its worst, and marks the height of anthropocentric idiocy and greed. The alternatives are plenty, and the blogosphere freely represents the diversity of applied ecologics available for growing sustainable food, permaculture being the most significant whole-systems approach to tackling food supply shortages and global ecological crisis.

Australian ecologist Tim Low has sited hundreds of edible food plants in Australia not dependant on private agricultural practices. These wild plants and fungi have all the nutrients, protein, energy and vitamins that are required for disease-free life and can grow anywhere – backyard gardens, laneways, public parks and state forests. Our current synthetic diet makes us sluggish, non-vital beings while degrading the biosphere, and the most significant ingredient in this Cartesian diet is crude oil. So in extending the adage ‘we are what we eat’, to ‘what we eat determines the sort of culture we make’, we therefore cannot help but reaffirm the dominant systems of intellectual and agricultural supply unless we alter the means by which we gather our food and share our creative content.

Another experiment is underway, designed by myself in collaboration with my household, to put this kind of thought into practice. We call ourselves The Artist as Family (AaF) and we are three years into our transition to de-capitalise and relocalise our food and energy supplies, freely publishing our findings, trials and tribulations on our various blogs.

The first of our projects was to spend 17 days as artists-in-residence in Newcastle picking up discarded non-compostable waste (mostly petro-chemical materials) along the coastline and throughout the city, each day blogging our experience. Over this time we developed a close relationship with anthropogenic material. Much of the waste, like that found along many coastlines of the world, ends up in an ocean trash vortex – floating islands of toxic debris that chokes and poisons marine and bird life in the vicinity. While in Newcastle we kept a blog and made a short film of our time there, once again freely distributing all content online.

As a result of this first AaF project the Museum of Contemporary Art in Sydney, invited us to submit a proposal for a similar work for their forthcoming exhibition In The Balance: Art For A Changing World. We wanted to again attend to anthropogenicism and the privatisation and transportation of resources as central to global ecological crisis. We came up with Food forest, a polyculture of plants and trees designed to mimic a dynamic forest ecology for the purposes of providing free organic food to a local community and free food and habitat for non-humans in a highly urbanised environment. The work triples as a biophysical poem, community garden, and an example of applied ecology, the developments of this project are again documented and shared freely online.

There is no ‘property’ to speak of with this artwork, all rights are relinquished; there is only material – edible and conceptual – to freely forage from. In this way the aesthetics, based upon the possibilities of reengaging the primitive, uncapitalised and ecological, are determined by an unclouded ethic to make our work free and public in every sense. In order to afford this ethic we practice frugality, and middle-class anthropogenicism is kept in check by making do with very little.

The reestablishment of local food commons in union with the development of a global creative commons comes from the recognition that we are biological beings, evolved from fungi – and thus evolved from complex networks of interrelation; webs of mycelial and intellectual connectivity not limited by private capital. The dominant ideology attacks the reciprocity of open, public supply networks. A public supply of resources, both conceptual and corporeal, is a decentred supply system that makes local communities more resilient.

Copyright is a system of central licensing developed to privatise thought and turn it into capital. Copyright is a sub-system of private wealth generation dependent on abstract and anthropocentric modalities. The various modes of which are over-extending both technological landscapes and natural ecologies as human populations grow. The ideology of aggregating capital, however, is fraying at the edges, and depending upon the speeds of climate change and descent of global oil supplies, we are watching the self-determined implosion of such an illogical, go-it-alone system.

Today, the dominant ideology makes us equally susceptible to becoming our own worse victims. An ideology that favours competition over reciprocity misinterprets ecological functioning. Cities are the centralised embodiment of private, competitive anthropocentric thought, of Cartesian hyper-separation, and today a dominant urban mindset, that attempts to cheat Malthusian sustainability logic, determines the policies, politics, agricultures, poetics, philosophy and science that makes our culture systematically unsustainable.

I’d like to finish this writing with one of my slow text mesostics as an example of behavioural change that speaks to some of the ideas I’ve outlined above. I have been developing the idea of slow text in union with the principals of the slow food moment, a moment wholly engaged in a local, in-season food supply. In this work vowels are super and subscripted to aerate the poem, mimicking the way in which microbes and earthworms aerate soil. This procedure slows the reading of the work, and asks the reader to attend to a decompressed ecological time. Mesostics are centred acrostics, famously implemented by John Cage. In a mesostic there is a central trunk from where the lines of the poem branch out in a self-determining form. This becomes the natural habit of the poem, a transition from the agricultural field – where neat rows of private crops line up like monological soldiers across the page – a return to the forest, to biodiverse and open systems, and eventually, if we are to think big, to open the possibility of an all rights relinquished ecological paradigm for culture. 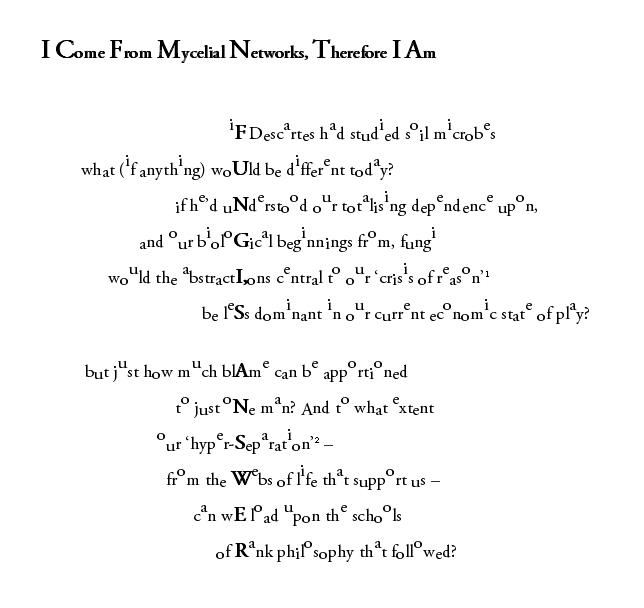 This entry was posted in ESSAYS, FEATURES and tagged creative commons, Patrick Jones, permapoesis. Bookmark the permalink.
Patrick Jones is an intermedia artist, writer of essays and poetry and a community food systems coordinator. He is currently completing doctoral work within the Writing and Society Research Centre at the University of Western Sydney.