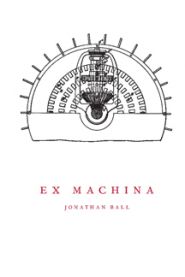 Ex Machina (BookThug, 2009) is a long poem written as a series of poetic and philosophical statements. Each page contains a titular number, and each line of the poem refers the reader to another page through a footnote. The book thus resembles the Choose-Your-Own-Adventure books of yesteryear, only instead of developing a progressive narrative, the system recurs and loops endlessly. If one attempts to read the book as directed, not only will one never reach a terminal position, but certain pages that exist outside of the system will remain forever unread.

The book thus rewards the frustrated, disobedient reader, who takes matters in hand and reads the book in some self-determined order – thus crafting unique, serial poems – or the reader who rewrites the book, by taking advantage of its issuance under a Creative Commons Attribution-NonCommercial-ShareAlike license. The point of issuing the book under this license is not to encourage unauthorized copying or distribution (issues so boring and irrelevant that I refuse to adopt any stance) but to encourage the use of Ex Machina as a starting point for the creation of new works. BookThug has already sent out a call for submissions to a potential anthology of Ex Machina ‘remixes’ – which I will edit, and for which I humbly request your submissions.

The text of Ex Machina meditates primarily on how machines have changed what it means to be human. Instead of crafting lyrical, epiphanic statements, I reproduce in quotes the epiphanies of McLuhan and Lacan. Instead of alluding to other poems, I allude to quantum mechanics and string theory. There are moments that, when struck by the tuning-fork of the imaginative reader, resound poetically in rather conventional ways, but the majority of the poems work to build mood and tone when they do not ask the reader to decode or confront some intellectual puzzle.

A handful of the poems in Ex Machina reflect directly on the book itself, the latticework of statements that are offered forth as poetry. The selections reproduced below are representative not of the book as a whole but of its more self-reflexive moments:

The book asks us to consider possible definitions of the word ‘machine’ and whether or not these statements are comprehensible or comprehensive in the digital age. [06]

The book offers examples of deus ex machina, most mortal of narrative sins, and asks us to confront the excision of the gods that the book’s title proclaims. [07]

The book begs us to heed its suffering and abuse at the hands of its reader. [63]

Other artists have already taken their scalpels to the book, dissembling and reassembling the text in various ways. At an event in Winnipeg, rEmiX MACHINA, I invited four artists to present their own works based off the book. (At the time of writing, I am in the slow process of putting this work online.

Colin Smith, an underrated poet associated with the influential Kootenay School of Writing movement out of Canada’s West, produced an excellent poem entitled ‘Hex Machiner’. Representative sample: ‘Kid A / trips over / his undeveloped / dick, does / a face plant.’

Patrick Short, singer/songwriter/guitarist of the post-punk band Electric Candles, read excerpts of the book in a Southern-drawled sprechgesang over a Ministry-esque industrial backbeat. Although Short didn’t change the text substantially, unlike other artists, he drew out its underlying apocalyptic horror.

GMB Chomichuk, a writer and comic artist, and the public face of Alchemical Press, produced a comic pamphlet entitled mobilis in mobili – a short fiction that might equally be considered a graphic novel due to the fact that it repeats and loops its metafictive story endlessly.

John Toone, a prairie poet and children’s author, teamed up with his young children to create a picture book adaptation, each page a collage of text ‘sampled’ from the book, found photos, and original drawings. The result is a mad, furious, vibrant volume – perhaps the only children’s book featuring photographs of human skulls.

The true appeal of issuing my poetry under a Creative Commons license is how easily I can encourage such productions. Books of poetry are not only produced in unwanted bulk, they have half-lives shorter than cooked fish. Ex Machina enjoys a strange appeal, and I attribute any interest in this unusual book to the fact that it was issued under this license, and to the efforts of my press, BookThug, especially publisher Jay MillAr, who was enthusiastic about the idea even when I was still reluctant.

Just think: if I hadn’t released Ex Machina this way, those little children would never have happily scissored and glued those human skulls!

Pages: 1 2 3 4 5 6
This entry was posted in ESSAYS and tagged creative commons, remixes. Bookmark the permalink.

One Response to Jonathan Ball, Ryan Fitzpatrick and Jay Millar: Ex Machina and the Creative Commons