The Bastards Learned How to Swim

I’ve been swimming since I was two and the feeling it gives me, of such wonderful lightness, is approximated by nothing else on earth. Except maybe alcohol. As adulthood came and passed me by I indulged in liquors that lifted my head two feet above my body and by waving my arms I could follow it up into the air. My drinking has always had a very narrow purpose, one that I’ve repeatedly given up without issue or pain; it is a bonus to rather than a facet of my days. But when I moved to Seoul I was confronted with a type of drinking attitude that insisted my commitment to alcohol be put to the test. For the first time I was taking part in a night life that had no half measures, no flip side to the coin: it’s go for a drink or go to bed. And if you choose bed, you’d better take a drink along.

“Work is the curse of the drinking classes” – Oscar Wilde

In South Korea it is the social aspect of their drinking culture that puts the country on a whole new level of consumption. Alcohol has moved beyond an accepted overindulgence into a necessary function within Korean life. A business dinner in Seoul looks much the same as a celebratory drinking session. These men keep their shirts neatly buttoned, ties knotted tight, jackets folded in half over chairs and proceed to completely let themselves go with numerous bottles of beer and soju. On the many weeknights when I’ve been wandering the city until early hours, buying cheap alcopops in seven elevens, it’s easy to lose count of the men, always in pairs, holding hands for balance, staggering from bar to restaurant to bar with little heed toward their working day fast approaching. They look like the walking dead and they do it over and over again.

In my eyes, Seoul is populated by eighteen year olds trapped in middle aged bodies and these newly-turned adults are about a decade away from learning their lessons on heavy drinking. At first I wondered how South Korea’s growing economic strength could continue when these were the citizens thrusting the country forward into a successful monetary future. Then I realised, the impressive work ethic of these people isn’t focused on a high standard of pride but on shameful necessity due to their night time distractions. So many men and women work until seven, eight, nine at night but these extensive work hours make sense when you remember that many of them haven’t sobered up until early afternoon. I don’t care how committed a worker you may be, if you spend your night sleeping off three bottles of soju on a train station bench, you’re not doing anything of any worth until at least lunch time.

I’ve been to dinner many times with my co-workers and one in particular, a Korean reporter known to me under her Japanese name of Harue, has a peculiar habit when we drink soju. Not only must our glasses always be full but each time we drink, she insists that we toast and when we clink she says ‘I like you’. Originally I thought she was tailor-making a toast just for me, to bring us close and cement our friendship. Each time was ritualistic; she spoke in the same pitch, with the same intonation and the same nod of her shiny-haired head. Late one night over beef tendon kebabs I asked her what it meant and she said it was her own personal habit every time she drank with others. So it wasn’t a performance for my benefit but it was an integral part of her drinking.

During these moments, Harue finds it appropriate to express her affection and when it is directed at me the walls between us, as women hailing from different countries, are knocked down and drowned in 20% alcohol. When she pours my soju she holds one hand to her chest, a gesture meaning ‘you are in my heart’; while ordering a new bottle she puts an arm around me and calls me Iseul, my Korean name. I am constantly touched by these overtures but part of me wishes that drinking could be removed from how we connect to one another. If I told her I loved a film that she also adored and she embraced me in excitement, I think I would take more from the moment but I have to take a moment to remember that the society I am now playing within doesn’t work under any rules I am acquainted with. 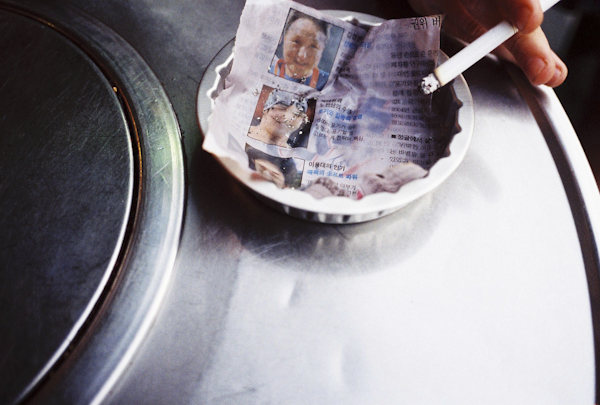 Perhaps it would be insulting for me to look for affection in ways I personally find meaningful when I am already offered love and acceptance. At our first dinner I drank my entire shot in one mouthful and each of my six co-workers’ reactions were of such wonder that I realised this was the way to a Korean’s heart: one hell of a strong stomach. Sipping or tasting a drink is an entirely satisfactory method of partaking in the festivities but downing with one swallow shows that you are there with them as a friend, ready for the night ahead.

Most of all it’s the novelty and availability of alcohol that I appreciate. Methods and places of drinking have become as important as what’s in the glass or, as I discovered at a music festival, the I.V.. The extent of packaging and beautifying alcohol have been realised in South Korea mainly due to the looseness of social drinking practices. At a popular bar in Seoul, known as Vinyl, drinks are mixed and served in an I.V. bag which you can enjoy whilst relaxing inside or take with you through the streets. A mere two blocks away is a permanent street vendor run by a smiley elderly woman who sells very cheap cocktails in plastic cups and, as there is no seating area, the customer is forced to consume on their feet.

This is one mighty drinking culture which, despite its over-consumption, has no problems with violence or public destruction. These people can hold their alcohol and if it does get the better of them, they go to sleep in a quiet corner of a train station or park. Considering the lack of alcohol control, this is extremely impressive self-control, especially when you consider how easy it is to drink. The following list is an example of locations that supply alcohol to anyone who walks in the door, no proof of age required:

This freedom has allowed anyone to drink any amount of anything they want at any time of day. And if this isn’t enough incentive for extensive drinking, alcohol is offered in a shocking variety of sizes and forms. Soju is a basic staple in the Korean diet and the regularity of which it is consumed is reflected in the many ways it can be bought. 360ml bottles are the favourite size for restaurants and they feel misleadingly like coke bottles. Needless to say, one is never enough. For a large family, or very thirsty couple, soju comes in two litre plastic bottles for a mere four dollars. When I saw it on the supermarket shelf I thought it was soft drink; when I showed it to my parents on Skype they thought it was mineral water.

Its tricky appearance makes the massive amount of alcohol it holds seem relatively harmless when the power of human denial is properly utilised. Furthermore, the bottle is just big enough to feel bottomless; after all, we’re only pouring single shots. And finally, soju can be bought in the smallest amount possible, that of a popper or children’s juice box. This is marketed toward the Korean on the go: hard working, busy and looking for a quick fix. The packaging suggests a different story. Now I’m not saying that Korean parents give their children soju poppers. But am I saying they don’t?

South Korea is the first place I’ve ever visited where peer pressure is absent and general expectation so obvious. Perhaps it’s the general pleasure of drinking in large groups, without the thunder of threat overhead, that draws me into late night sessions but I’m not entirely sure the reason doesn’t lie in my own psyche. Where alcohol was once a release of my inhibitions it has now become a gateway into foreign affections. These people are hard as nails, quick to touch and often so drunk they can’t stand after midnight.

But damn can the bastards swim.

This entry was posted in ESSAYS and tagged alcohol, Korea, Ozko Features. Bookmark the permalink.

Lara S. Williams is a British/Australian writer whose work has been published in Cordite, Antipodes, Islet, Blue Crow, page seventeen, Island, Mascara, fourW and the Sun Herald Extras Section. She is editor of the travel journal The Great Affairs and is currently undertaking her creative writing masters at the University of Edinburgh.

View all posts by Lara S. Williams on Cordite →