Shining Worlds: On the Artist’s Book of Robert Adamson and Peter Kingston

I’m sitting in the Rare Books room of the State Library of Victoria, lost in time and strangely joyous as I encounter one of its new acquisitions, the late 2012 ‘artist’s book’ and collaboration between poet Robert Adamson and well-known Australian artist Peter Kingston, Shark-net Seahorses of Balmoral: A Harbour Memoir.

It is a privilege to read, in this vault of deep, clear silence and rarified air, the fourteen poems Adamson created for the book, and to sift my responses to these sensitive, memorialising poems through the light of their twinning, linocut images (21 in all), created by Kingston in response to the poetry. The poems are hand-printed en face to the images.

Central to the book’s genesis was the fact that both poet and artist grew up on Sydney Harbour, though in different parts of it, and their adolescent and adult lives diverged strongly. While the poems are autobiographical, they also assimilate experiences of Kingston.

A limited-edition production of 26 – marked A-Z – the work was initially priced by Australian Galleries, the Australian dealer for the book, at $7,500 each. The book was published – also in character of collaboration – by rare-book dealer Nicholas Pounder. It includes a photographic portrait of Kingston and Adamson by Juno Gemes, Adamson’s partner. 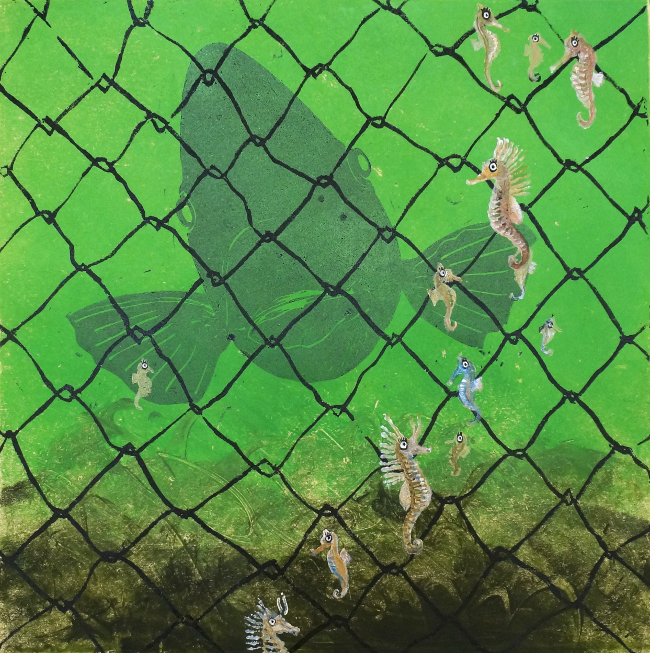 Image courtesy of the artist and Australian Galleries, Sydney & Melbourne

Alongside being responsible for design, printing and assemblage, Pounder created the light-sensitive circuitry necessary for another eccentricity of this artwork: when one opens the hand-made, large wooden box which houses the book, a song entitled ‘without words’ is played, composed by Kingston in homage to Australian poet-magnus, Francis Webb. A poem late in Adamson’s suite, ‘Francis Webb at Ball’s Head’, is for that poet too, one on whom Adamson has previously delivered a lecture as Chair in Poetry at the University of Technology.

As is common to the rarity of these objects, Shark-net Seahorses of Balmoral: A Harbour Memoir can be appreciated as equally produced by writer, artist and publisher. This tradition of artists’ books, also sometimes known as livres d’artistes, has modern precedence in the decisions by the likes of Parisian art dealers Ambroise Vollard and Daniel-Henry Kahnweiler to also become publishers.

Exploring the potential of the book to be a de luxe art object are 20th-Century collaborations of enduring brilliance by artists and writers such as Bonnard with Verlaine, Picasso with Reverdy, and Miro with Eluard. A facsimile of this last book, À toute épreuve, is also in the library’s collection.

The history of the artist’s book, where it has directly related to the publication of poems and literature, is long-standing. As discussed in an essay accompanying a 2008 exhibition on artists’ books at London’s V&A, curator Dr Rowan Watson cites the creation of title pages by Rubens, the illustrations by Delacroix for Goethe’s Faust in 1828, and Manet’s images for Edgar Allan Poe’s The Raven in 1875 as other precedents. And you could think of Blake’s Songs of Innocence and of Experience – the first copies of the forerunning Songs of Experience were illuminated and printed by Blake himself.

However, as Watson points out, it is ‘facile’ to consider a literary book to be an artist’s book just because an artist has been involved in producing images to be used with it.

In many cases, an artist’s book need not involve language in any form or collaboration, and it is a form explored by numerous contemporary and modern artists, including Rauschenberg and Kiefer.

Cowley, responsible for artist’s book acquisitions at the SLV, has charted a sharp increase in the production of them in the past 20 years, both locally and globally.

‘I think it is arguable that the electronic environment we live in is making us more appreciative of the handmade and tactile. In a world where most information is electronic, it is the physical properties of a book that make it special – paper, ink, design, binding. We experience artists’ books rather than read them in the traditional sense, and in this way they provide us with something beyond the digital book.’

The trend can also be seen as a kind of extreme version of fetishisation of the book as a valuable, even venerable object … a direction inversely related to the predicted death of the physical (as opposed to digital) book of mainstream publishing.

The form of the artist’s book is also plural, Cowley continues: ‘It may be a unique one-off book, it may include etchings and lithographs and be produced in a limited edition, it may be a conceptual book printed offset in an unlimited edition.’

Using the National Library of Australia’s Trove allows the holdings of artist’s books such as Shark-net to be displayed. Usually a copy of an artist’s book is accessible to members of the public if you make an appointment.

Other important acquisitions of this kind at the SLV include collaborative or mixed-mode editions such as Chris Wallace-Crabbe and artist Bruno Leti’s projects; Australian artist Lyn Ashby exploring poetic language as a visual field in works such as On Particle Physics and Ideo(t) gram[infinity symbol]atica; and Faded World by Melbourne writer and artist Antoni Jach whose 78 images are accompanied by a 10,000 word lyric essay written to a poetic constraint; every paragraph is four lines long.

So it is that I find myself, absorbed in a quiet joy, with Shark-net. This makes sense: while the emotional barometer of the poetry shifts across a number of registers in the book, its life-force comes from the memories of a boy whose experiences of the sea and harbour shimmer with edenic origin.

Some of the poetry produces mirth, not an easy achievement – and, initially, they appear to do so innocently. Such is the case of the poem, ‘The River Caves’, where Adamson and a cohort of tween sea-scouts jump boat in the middle of a scenic ride. However, there is a darker dart residing here when one remembers that the poet grew up to spend time in juvenile detention centres.

A poem later in the book, ‘The Long Bay Debating Society’, has a similar edge; some of the prisoners, who form a debating team, want to hold a debate with others visiting from the outside. Their request is acceded to, but on a condition: ‘The Governor would choose the topic’. The group is eventually handed ‘the Governor’s note/ (it was the summer of 1964) our topic/ ‘Is the Sydney Opera House really necessary?’

This essay’s title, ‘shining worlds’, comes from the book’s title-poem, composed in 10-line stanzas, with phrases such as ‘The beach was the boy’s shining world … ‘ and ‘sepia kelp with its drifting shark-skin leaves’. Adamson and Kingston’s profound attachment to the Harbour foreshore resonates throughout Shark-net – where its waters, nearby landmarks and cultural experiences also abide. This is the grounded and, via the sparks of memory, luminary ‘shining world’, a reader is presented here in words and images.

This entry was posted in ESSAYS and tagged Des Cowley, Jacinta Le Plastrier, Nicholas Pounder, Peter Kingston, robert adamson. Bookmark the permalink.
Jacinta Le Plastrier is a Melbourne-based poet, writer and editor. She edits the ‘Guncotton’ blog for Cordite Poetry Review, curates the monthly Gilgamesh Modern Salon and is Publisher at John Leonard Press. Her poetry collection, The Book of Skins, will be published March 2014.