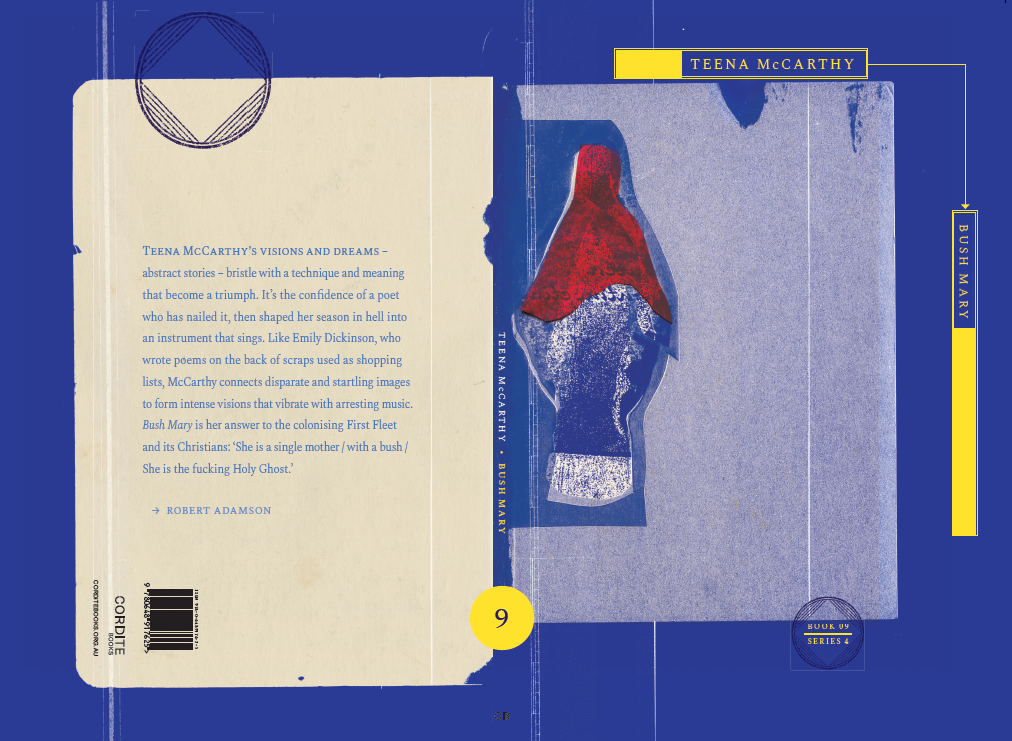 When Teena McCarthy told me she had constructed this book from poems, lines, phrases and images that she had written on odd-sized pieces of paper and had gathered them until they formed a manuscript, I immediately thought of Emily Dickinson, who also wrote many of her poems on the backs of envelopes and scraps that had been used as shopping lists. The connection is not far-fetched: McCarthy connects startling images to form intense visions that vibrate with arresting music.

The poems in Bush Mary work on multiple levels – woven from history, life experience and metaphor are visionary chords made of words. Images appear gradually, sometimes over several pages, like photographic prints forming in developing chemicals. I want to use the word ‘mystical’ here – harsh and beautiful, these poems ache with reality and seem to bring poetry back to life again. This book reads as if written by a poet working before the last century of modernism; albeit aware of that era, it comes from the pre-dawn of poetry before it became clogged with the ‘anxiety of influence’ and experimental verse. Maybe the poems trace mystic notes.

McCarthy’s visions and dreams – abstract stories – bristle with a technique and meaning that became a triumph. It’s the confidence of a poet who has nailed it, then shaped her season in hell into an instrument that sings. It is poetry created from transformed traumas, and importantly, effortless praise, for both survivors and old ghosts that flash behind the present moment or line from the past. As we read, yesterday, today and tomorrow mix, and a generous spirit is revealed that doesn’t grow bitter even after every rotten deal has been broken and served up to the poet and her people. There’s only the poem, only the new life to be written and lived out, only the song that strikes into your soul, reinventing love and compassion by its flashing words and naked statements.

The brilliant metaphor and terrible fact of the stolen Indigenous children, later as young women, encapsulates the Church sending Bush Marys to the outback stations as slaves or worse. Here is the attitude of the white men:

In the fifth century, Saint Augustine said, ‘A virgin conceives, yet remains a virgin: a virgin is heavy with child; a virgin brings forth her child, yet she is always a virgin.’ McCarthy, almost 2000 years later, replies, ‘We can no longer escape / into the truth of Bush Mary, / we’re non-virgin, / used by carnal. / She is every body. / Bush Mary blood’. Then, like Eurydice, ‘She has no voice.’ McCarthy creates that voice in profoundly visual poems, and answers the colonising First Fleet and its following Christians: ‘She is a single mother / with a bush / She is the fucking Holy Ghost.’

This entry was posted in INTRODUCTIONS and tagged robert adamson, Teena McCarthy, Zoë Sadokierski. Bookmark the permalink.
Robert Adamson has worked as a poetry editor and consultant with Angus & Robertson/HarperCollins and has established several small publishing companies, including Prism Books and Big Smoke. He was the poetry editor the literary magazine Ulitarra from 1993 to 1997. In 1997 he became a founding editor, along with James Taylor, of the international poetry journal Boxkite. Adamson, with Juno Gemes and Michael Wilding, established Paper Bark Press in 1986 – a small press that went on to become one of Australia's major poetry publishing companies with a backlist of over thirty books. His autobiography, Inside Out, was published in March 2004 by Text Publishing. Inside Out was shortlisted for the Melbourne Age's Book of the Year Awards 2004, the Queensland Premier's Literary Awards 2004 and NSW Premier's History Awards 2004, State Library of New South Wales National Biography Award 2004, and the NSW Premier's Literary Award's Douglas Stewart Prize for non-fiction. Adamson has presented two new anthologies of poetry, The Golden Bird: New and Selected Poems in 2008 (Black Inc.) and The Kingfisher's Soul in 2009 (Bloodaxe Books UK). Recent publications include Net Needle, (Black Ink) (Bloodaxe UK) and (Flood Editions USA) (Shortlisted for the Prime Minister’s Literary Awards) 2020, and his latest volume is Reaching Light (2021 Flood Editions US).


More by Robert Adamson on Cordite Poetry Review →
Teena McCarthy is a visual artist and poet who works predominantly in painting, photography and performance art. She graduated in 2014 from UNSW Art & Design with a Bachelor of Fine Arts with Distinction. McCarthy is an Italian Barkindji woman who is a descendant of The Stolen Generations. Her work documents her family’s displacement and Aboriginal Australian’s loss of Culture and their ‘hidden’ history. McCarthy has exhibited extensively over the past seven years, most recently in Four Women: (I do belong) Double, curated by Djon Mundine OAM, Lismore Regional Gallery, 2017, and in Realising Mother, curated by Zurica Pulija, with co-curators Sandy Edwards and Luke Letourneau, Kudos Galleries, UNSW Art & Design, 2017. Her work from this show was featured in an article and interview in The Sydney Morning Herald.


More by Teena McCarthy on Cordite Poetry Review →
Zoë Sadokierski is a Sydney-based designer and writer. She has designed more than 250 books for various Australian publishers, and is Vice President of the Australian Book Designers Association. Zoë lectures in the School of Design at the University of Technology, Sydney, where she runs the Page Screen research studio, experimenting with publication models for limited edition print and digital books. She also writes a column on book culture and reading in a digital age for The Conversation.