Reinventing the Ancient Across four Cultures, One Ocean

A Nest of Cinnamon was an international, multi-art form performance of three distinct art forms and artists:

1: poetry and spoken text created and performed by Angela Costi

2: playing of the Sheng instrument by Wang Zheng-Ting. The Sheng is an Ancient Chinese instrument – 3000 years-old – consisting of 17 bamboo pipes of differing lengths mounted onto a base

3: a music and dance installation created through the use of silk threads and paper cups by Stringraphy Ensemble (Japan-based).

The collaborative mix of Ancient instrument, Sheng, modern reinvention, Stringraphy and Costi’s type of poetic practice led the artists to explore in detail the mythological journey of the Phoenix. The Phoenix myth spoke to them on many levels. It is a myth that is familiar to the world at large and yet misunderstood due to its popularity. In Chinese, Japanese, Ancient Greek and early Christian mythology, the Phoenix bird is an eternal symbol. At the end of its very long life, the bird builds a nest of cinnamon twigs, which it ignites and fans with its wings into a fierce fire. Both nest and bird burn fiercely and are reduced to ashes, from which a new, young Phoenix arises. For the artists, ‘the nest of cinnamon twigs’ symbolised culture, tradition, rules, social code and expectations.

The Phoenix myth not only resonated with their individual artistic practices, it crossed their cultural landscapes. The Stringraphy creator, Kazue Mizushima, walked away from her piano and conventional modes of composition to awaken in her a connection with trees, birds and insects through a new mode of making music as an embodiment of the Phoenix journey. Costi’s recreation of traditional Cypriot-Greek folk songs and storytelling into new poetic form and metre is another mode of ‘burning’ the past in order for it to have a contemporary resonance. The Sheng instrument is visually intriguing as it was formed to imitate the shape of the Phoenix bird (the symmetrical arrangement of the pipes in differing lengths is an aesthetic connection to Phoenix wings).

The production integrated poetry, music and performance as it sought to narrate the Phoenix myth and then embody the myth. Global Japan Network produced it in partnership with Multicultural Arts Victoria and in Japan, with Midori Yaegashi, the producer of Stringraphy Ensemble. The project received creative development funding from the Australia Council for the Arts and Arts Victoria. Three full-house showings of the performance took place at Studio Eve, Tokyo in April 2009. Two Melbourne showings without the physical presence of Stringraphy Ensemble (they were projected on screen) took place at Meat Markets, a part of the CultureLAB program of City of Melbourne in June 2009. 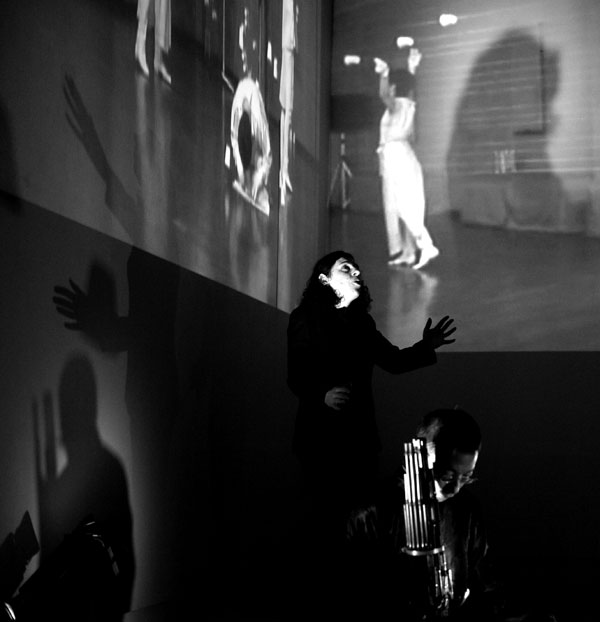 The performance comprises four parts: ‘The Journey’, ‘What We Must Burn’, ‘The Burning’ and ‘In Order to Continue’. ‘The Journey’ focuses on telling the myth of the Phoenix through the three art forms, which provides a springboard into the next three parts. These parts encourage the artists to embody the myth, as they are required to ask themselves: What must I burn in order to continue? What is that aspect of myself – from my past, my childhood, my memories – that needs to be released ‘into the fire’ so that I can move on and be renewed?

Ting answers these questions by seeking release from the suffering he endured during China’s cultural revolution. Costi seeks to release into the fire her inherited sense of struggle to make ends meet, as handed over to her by generations of grandmothers. Mizushima revisits her childhood memories of being made to learn the piano from the age of four years old, and she releases this burden, discipline and control into the fire. ‘The Burning’, which is the third part of the performance, reaches a climatic level as all artistic elements are fused into the cathartic experience of letting go of the debilitating past. The final part of the performance embodies that part of the myth that concerns continuum and survival, and is explored separately by each artist.

This international collaboration illuminated the idea that we are all hybrids – continually igniting ourselves to make way for new cultures to exist within us – and so, performing it, we fly in the face of hanging onto our past from generation to generation, embedding our offspring with our nationalistic fervor and nostalgia. It also flies in the face of assimilation and integration because the past’s ashes are part of the air that we breathe, never lost or forgotten.

(This poem integrates Stringraphy Ensemble, Ting with Sheng and Kiku in nest. All the elements – voice, body, sound and movement – symbolising the Phoenix and its journey.)

It is time to nest in the highest branch of the kiri
carefully select the most aromatic twigs
from the cinnamon trees
add frankincense and myrrh
create a censer of divine smoke
a pyre to perfume my ashes.

I will draw breath for the finest song
send it soaring to reach the sun
who will greet me with rays that spark
my wings will open in a wide embrace
to fan the flames into a blaze
and engulf me in a triumph of fire.

My desire to die is not stimulated by age
though I am a parrot to my past
though I tire of singing my popular song
though I refrain from flying over mirrors
with their insistent display of my failure to moult feathers,
once mistaken for jewels.

I admit, the sea’s spray does not refresh my flight
the horizon does not keep me awake
the world’s pattern does not capture my eye
the threads of war, the stitches from drought
the weave of eruption, corruption, destruction;
it’s so monotonous tending earth’s nest.


Now that I no longer glide with change
now that moments are not made on route
now that my organs have become debris
a bird cage grows from within
a civilisation is choking the earth
a 500-year cycle dreams of its end.

When the burning turns my song into a scream
the flesh is seared with whimpers, a plea
how I wish to be spared
an ordinary bird dies quick and clean
I think of the peacock, eagle, even the pigeon
how would it be to die quietly?

I have traveled from the Ancients to China
I have become a global trademark
I have met Ezekial, Nietzsche, Basho…
poets, philosophers, nation leaders…
know me as more than symbol,
know how to find life through death.


I must wake the sun with a song
rise from the nest
inhale tone, rhythm, pace
exhale heart, spirit, soul
fan out my wings and ask,
how will the world perceive me?

The ashes of ancestry and history are a part of me
to gather into an egg
and cradle in flight to the city of the Sun
where I lay them to rest at the altar
forever in worship to that which burns
and takes and renews life.

I continue my flight to what is known as home
with a flock of cranes, a company of kookaburras,
a parliament of owls, a congregation of magpies,
there is the dove to my left, the sparrow to my right
the squawk, screech, chirp of welcome;
I have so much to learn.

Pages: 1 2 3 4
This entry was posted in ESSAYS and tagged Angela Costi, Christian Leavesley, Stringraphy Ensemble, Wang Zheng-Ting. Bookmark the permalink.
Angela Costi is a poet and writer with a background in social justice and community arts. The author of five poetry collections/books. Her most recent is An Embroidery of Old Maps and New (Spinifex, 2021). She is known as Αγγελικη Κωστη among the Cypriot diaspora, which is her heritage. She lives with a rare genetic condition: schwannomatosis.

Wang Zheng-Ting is a world-renowned Sheng player and an ethnomusicologist. Ting graduated from Shanghai Music Conservatory 1987 and completed a MA in Ethnomusicology at Monash University 1995 and a PhD in Ethnomusicology at the University of Melbourne 2004. He lectures on Chinese music at the University of Melbourne. He has been involved with the Melbourne International Arts Festival in 1999, 2002 and 2007 as an artist. He has experimented extensively with the integration of Chinese and Western music, and has performed with senior musicians and major Symphony Orchestras in Australia, the USA and other parts of the world, where he is a regular lecturer and performer of the Sheng (including the University of New York, the Victoria University Wellington NZ, Hoch Schule Fur Music Koln, in Wuppertal, Germany.

One Response to Reinventing the Ancient Across four Cultures, One Ocean