A Nest of Cinnamon

Combining poetry with music to create a spatial dialogue is common practice. From Sappho to Leonard Cohen, Anne Sexton to Alison Croggon, Eric Beach to Kieran Carroll, there are many poets, from our past and modern times, who have engaged in a mutually rewarding collaborative process with musicians for the stage. The opportunity to present a poem off the page and to have it imbued with another form of metre, rhythm, beat, tonality and sound can etch the poem into memory. But what if the music or sound is unfamiliar to the poet? What if the music or sound comes from a place the poet has never travelled to? These questions, and others, presented themselves as I found myself agreeing to be part of an international collaboration involving my poems, a Japan-based musical troupe known as Stringraphy Ensemble, and Wang Zeng-Ting, a world-renowned performer of an ancient Chinese reed instrument known as the Sheng.

The idea to bring these three distinct art forms together came from Keiko Aoki of Global Japan Network and Stringraphy. In Japan, Stringraphy had collaborated with a poet and they were interested in the process of collaborating with an Australian. Keiko approached me with the idea of combining dissimilar art forms and cultural identities in the one space, on the one theme, and in this way furthering an international dialogue. This idea appeared simultaneously complicated and doable, and so exciting to me, since I was at a stage in my practice where I was thirsting to be challenged and to challenge. I had encountered and created many performances of this nature with Australian-based artists, and was interested to further my experience within an international context. 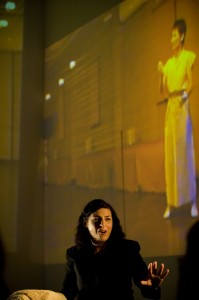 The first time I watched Stringraphy on DVD I was mesmerised and daunted. The group consists of four women and an installation made out of 15 metres of silk thread, woven across and around a stage, with paper cups clipped in strategic places along these threads. The sound produced when the women play this simple yet precisely tuned instrument is orchestral in nature. Kazue Mizushima, the artistic director of Stringraphy, has been described as an installation sound artist. Walking alone in a forest one day in 1992, she thought, 'It would be wonderful if I could transform the forest into a giant harp by stretching hundreds of strings between the trees'. And she did, in a series of performances known as playing the forest. From there, she reinvented her musical practice from classic instrumentalist to Stringraphy. Although there is an alternative, avant-garde aspect to Stringraphy's work, the presentation of their work has also been likened to Noh, the oldest existing form of Japanese theatre.

Perhaps this duality of traditional and contemporary forms is what they could sense in my writing and hear in my voice on CD. In any event, through a series of emails and skyping sessions, an agreement was reached to work towards a performance that would integrate my poetry with Stringraphy's music. Further discussions imagined our art forms creating a theatrical dialogue, embedding an accumulated meaning from poem to sound, movement to performance.

In the midst of this discussion, Keiko, as project manager, raised the inevitable practicalities: we needed funding to collaborate. But as anybody who has applied for funding can tell you, it's a long process. It can take over a year. In fact, it did. The agreement to collaborate was made around November 2007, yet the actual departure to Japan didn't take place until April 2009.

During the funding application time, Wang Zeng-Ting was brought on board in order to commence face-to-face collaboration in Melbourne, which would be continued in Japan. Ting and his instrument, the Sheng, enriched the project. I had seen Ting play on numerous occasions and I was haunted by his performance. The Sheng is the earliest known example of a free-reed instrument, existing as far back as 3000 years ago. It consists of 13 to 17 bamboo pipes of different lengths that are mounted onto a base. Ting explained how the Sheng's shape was formed to imitate the shape of the phoenix bird, the symmetrical arrangement of the pipes in differing lengths being an aesthetic connection to phoenix wings. 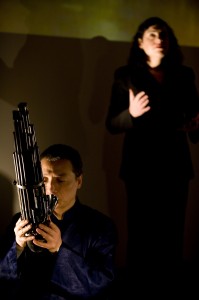 Ting's contribution made concrete the motif of reinvention and renewal that is central to that part of my poetry practice in which I am filtering through my heritage (whether it is the Cypriot dialect or the metre and rhythm of a traditional folk song) in order to recreate a new pattern and sequence of words. The collaborative mix of ancient instrument and modern reinvention led Ting, Stringraphy and I to explore in detail the mythological journey of the phoenix.

The phoenix myth spoke to us on many levels. It is a myth that is familiar to the world at large and yet misunderstood due to its popularity. In Chinese, Japanese, Ancient Greek and early Christian mythology, the phoenix bird is an enduring symbol. It heralds in a new era. It is also known for its act of resurrection. At the end of its very long life, the bird builds a nest of cinnamon twigs, which it ignites and fans with its wings into a fierce fire. Both nest and bird burn ferociously and are reduced to ashes, from which a new, young phoenix arises. For me, 'the nest of cinnamon twigs' symbolised culture, tradition, rules, social code, expectations, observance and religion. The metaphorical act of building the nest and then setting it alight, with aspects of my old self in it, evoked a strong mix of emotions, which I was keen to articulate through poetry and performance.

Given that ours was an intricate and rare combination of poetry and music, we unanimously decided to bring a dramaturge/director into the mix. Melbourne-based Christian Leavesley brought a strong directorial vision and a much-needed framework to the performance. Inspired by my poems and the music of Stringraphy and Ting, Christian drafted a storyboard made up of four parts: The Journey, What We Must Burn, The Burning and In Order To Continue. Part one, The Journey, focused on telling the myth of the phoenix through our various art forms, which provided a springboard into the next three parts. In turn, these parts encouraged us to embody the myth, since we each had to ask ourselves: What must I burn in order to continue? What is that aspect of myself, from my past, my childhood, my memories, that needs to be released 'into the fire' so that I can move on, be renewed? 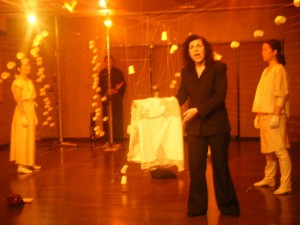 In order to answer to this question, I actually walked around my house thinking of what needed to be burned and found my grandmother's embroidery. Holding it in my hands, I could feel the many years of labour she and my foremothers had poured into these fabrics and threads turning them into tablecloths, bedspreads and pillowcases for the wealthier families living in the Mediterranean. I could feel her struggle to make something out of nothing; the word 'struggle' weaved itself throughout this painstakingly made tablecloth. This is what I needed to burn: not the embroidery itself but what it symbolised. I wrote a poem in the form of a dramatic monologue. It was the voice of my grandmother, explaining how the embroidery was her book. 'This is my book, each thread a letter, each pattern a story/ stitch by stitch the sun rises over here, sets over there …'.

The creative sparks flew and I was immediately absorbed in the process of re-drafting the poem for the performance. Christian's approach of workshopping poems as the poet is reading them (rather than focusing on them as they are written on the page) inspired the performer in me to guide the poet in me, and both aspects of my creativity worked as a duet – sometimes out of sequence, whereupon I could rely on Christian to push me forward or pull me back. By the time we departed for Japan to begin our two-week collaboration with Stringraphy, we had all agreed on the storyboard and the general thrust of the performance.

In Japan we collaborated at Studio Eve, which is Stringraphy's workspace. Nearby was a park fertile with cherry blossoms. We often had our lunch there, watching the blossoms fall like confetti. Stringraphy Ensembles's professionalism, talent and hospitality made it seem easier than it really was. At the studio, we worked intensively, but they didn't seem like long hours at all. Yes, we had developed a long-distance creative relationship, but this could not substitute for face-to-face, hands-on, collaborative work. We needed time to absorb the meaning of each other's art forms; we needed time to explore various ways of integrating our forms; we needed time to enjoy each other's company in order to enjoy each other's performance. This meant finishing sessions as late as 9.30 pm. Yet despite the pressure of limited time, we were able to prepare a 46-minute showing of our collaborative work, which accorded with the storyboard and its four parts.

Presenting our work before a Tokyo audience was a sensational experience. The audience felt very warm and receptive to my poetry despite the language barrier. (In order to assist with translation, we had my poems and the narrative structure translated into Japanese.) A memorable experience was talking to a young Japanese member of a rock band who explained how he was moved to tears by the performance. Somehow, despite cultural, language and formal differences, we had created a cathartic experience.

This entry was posted in ESSAYS and tagged Angela Costi, collaborative, performance. Bookmark the permalink.

Angela Costi is the author of four collections of poetry Dinted Halos (Hit&Miss Publications, 2003), Prayers for the Wicked (Floodtide Audio and Sunshine Text, 2005), Honey and Salt (Five Islands Press, 2007) and Lost in Mid-Verse (Owl Publishing, 2014). She has written eight produced plays including Panayiota, Shimmer and Un-Beat-Able, and co-authored with Angela Bailey, Relocated - a tribute to tenants, Kensington Public Housing Estate (City of Melbourne, 2003). In 1995, she received a travel award from the Australian National Languages and Literacy Board to study Ancient Greek Drama in Greece. In 2009, she travelled to Japan with funding from the Australian Council for the Arts to work on an international collaboration involving her poetry and Japan-based, Stringraphy Ensemble. Since 1994, her poetry, stories, essays and reviews have been widely published. She manages 'Angela Costi Poetics' - a FaceBook artist page dedicated to reflecting on the poetry writing process. She works in the social justice sector.

View all posts by Angela Costi on Cordite →