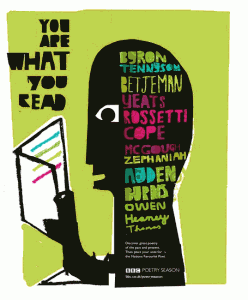 I did a series of 10 postcards and a poster for the 2009 BBC Poetry Season. Each postcard was based on a classic British or Irish poem to promote the Poetry Season.

Here are four of them and the poster.

Pages: 1 2 3 4 5
This entry was posted in ARTWORKS and tagged Alfred Lord Tennyson, Chris Haughton, Seamus Heaney, W B Yeats, Wilfred Owen. Bookmark the permalink.
Chris haughton is an Irish designer and illustrator. He was listed in Time Magazine's DESIGN 100 for the work he's been doing for fair trade company People Tree. His first book, A Bit Lost, has been published in 14 languages and has won 9 awards in 7 countries, including the Dutch Picture Book of the Year. Oh No George! came out in March 2012.