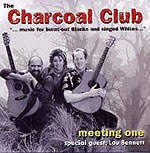 When the show began, with Richard J Frankland's focus on family, my first thought was how a single white gay man might find entry into the performance. There were several openings …

Frankland's show for burnt out blacks and singed whites was a radical memoir as performance. I expect there's plenty of precedent, but this one isn't merely radical or merely biographical: but — from where I'm sitting — in a sense a memoir of Australia: one that goes to the crux of what's important about now and the future.

It was refreshing to see a performance as strong as Frankland's: unbowed by the stupidity of the Australian voting public and its hero. If we need heroes, Frankland could be one. Or Germaine Greer whose shit stirrings and creative comments come from a video screen to the band's left (as well as those of a dozen or so others, including Marcia Langton). It seemed, sitting there, that the responsibility of whites — and something to be sorry for (and that relates to the present) — is to counter the behaviour and words of Howard & co.

There was a lot of death. And perhaps it takes being able to understand — imaginatively, sympathetically — what death means, what its effects are, that are the beginnings of understanding what Indigenous people are saying. The lead story the morning after the show on msn.com said that ‘100 000 innocent Iraqis had been killed' since the start of the war. Should they be over it already or should they wait till five minutes after the killing stops?

Part of my homework for singing class was to go to a live gig. I didn't know much about Frankland, I hadn't known he was standing for the Senate until I went to vote. He has a powerful voice and his band of six (including a drummer who doubled as a eucalyptus branch shaker) played songs that veered from country to funky, interspersed with Frankland's state-of-things discourse.

Why couldn't he be given a standing ovation on Idol instead of crap Hilary Duff? Frankland is ‘the perfect example' (Dicko) of not just having a voice but doing something with it.

Frankland talked about travelling around his country, and I thought of Pambula, where my grandfather was born, and the country and light around there.

As it ended, and I thought of what to do next: go home and watch taped Kath and Kim, have coffee, or jump in the Yarra (I was tired ok?) I realised the import of Frankland's comments on the family: the hypocrisy of politician and media talk of family — meaning the disconnected white nuclear unit — while government policy and ideology attempts to destroy anything larger.

As one of the talking heads said, ‘John Howard couldn't grow into being Prime Minister so he shrank the country'.

This entry was posted in ESSAYS and tagged indigenous Australia, michael farrell, Richard Frankland. Bookmark the permalink.
Michael Farrell's I Love Poetry and A Lyrebird: Selected Poems are both out this year (2017): from Giramondo and Blazevox, respectively. His scholarly book, Writing Australian Unsettlement: Modes of Poetic Invention 1796-1945, was published by Palgrave Macmillan.