Ania Walwicz is an Australian poet and play-wright, born in Swidnica, Poland, she emigrated to Australia in 1963 and was educated at Melbourne's Victorian College of Arts and the University. She has been a writer-in-residence at Australian universities and is well-known for performances of her work. She is widely admired for her highly experimental poetry, which rejects the conventional structures of free-verse in favour of the prose-poem form, but creates energetic rhythms through patterns of grammatical and tonal recurrence. Walwicz's principal collections include Writing (1982), re-issued as Travel/Writing in 1989, Boat (1989), and Red Roses (1992). Her theatrical pieces include Girlboytalk (1986), Dissecting Mice (1989), Elegant (1990), Elegant (2013), Palace of Culture (2014) and Horse (2018).

In it, she was putting the manuscript of her new book, Horse: A Psychodramatic Enactment of a Fairytale, into an oven at La Mama – where she had performed a few years’ prior. The book caught alight.

Dear reader. I will tell you a story. This is a story of my life now. Dear reader turn away from these pages…They will only bring grief to me… It will only wound me and hurt me. But I must …

All Writing Is Pigshit 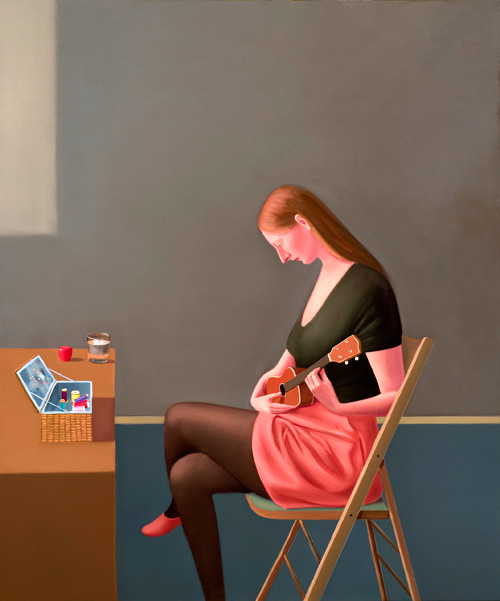 Text by Ania Walwicz and paintings by Prudence Flint:
I play the ukulele now play me what is this why do I do this lawyer tells me next door man plays ukulele now and I hate ukulele what is it why paint now why write me what is going on should I do this should I do me what is what am what am I doing now what is this silly billy billy bunter now eat a pie throw me what is going on said pompous mouse in house that will do me they fight for best better mister turkey they gobble wobble said poetry I can’t stand me