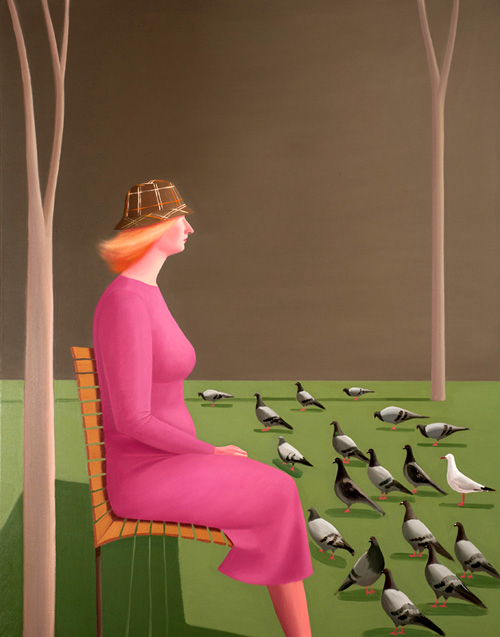 This entry was posted in ARTWORKS and tagged Ania Walwicz, Prudence Flint. Bookmark the permalink.
Prudence Flint graduated with her Bachelor of Arts in painting at Victoria College of the Arts (1989) before completing her Master of Fine Art by research at Monash University (2008). In 2004 she won the Doug Moran National Portrait Prize with her painting A Fine Romance#9 and in 2009 the Portia Geach Memorial Award with her painting Scrambled Egg. She has been a finalist in numerous drawing and painting prize shows including; Arthur Guy Memorial Painting Prize, Archibald Portrait Prize, R & M McGivern Prize, Geelong Contemporary Art Prize, National Works on Paper, Paul Guest Prize, and Darebin-La Trobe Acquisitive Art Prize. Her work is held in the collections of City of Port Phillip, Artbank, BHP Billiton and private collections in Australia. Flint is represented by Nellie Castan Gallery in Melbourne, Chapman Gallery in Canberra, and Bett Gallery in Hobart. She is to have her eleventh solo show at Nellie Castan Gallery in October 2012.


More by Prudence Flint on Cordite Poetry Review →
Ania Walwicz is an Australian poet and play-wright, born in Swidnica, Poland, she emigrated to Australia in 1963 and was educated at Melbourne's Victorian College of Arts and the University. She has been a writer-in-residence at Australian universities and is well-known for performances of her work. She is widely admired for her highly experimental poetry, which rejects the conventional structures of free-verse in favour of the prose-poem form, but creates energetic rhythms through patterns of grammatical and tonal recurrence. Walwicz's principal collections include Writing (1982), re-issued as Travel/Writing in 1989, Boat (1989), and Red Roses (1992). Her theatrical pieces include Girlboytalk (1986), Dissecting Mice (1989), Elegant (1990), Elegant (2013), Palace of Culture (2014) and Horse (2018).