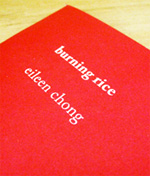 Eileen Chong’s Burning Rice is steeped in images of food, family and connectivity. The poems thematically span geographical and chronological distances in order to make links between cultural and ancestral origins. Culinary references combine to create comforting images of solidarity in the face of isolation and anxiety. However, this is not a chapbook wholly steeped in nostalgia. While diasporic tendencies can be identified, Chong is predominantly focused on establishing new spaces for her speakers and their family members, while also preserving what has been inherited. Historical boundaries are blurred as Chong’s speakers engage with close and distant family members, literary and historical figures alike.

Eileen Chong is a Sydney poet who was born in Singapore. At university she majored in Linguistics and Literature before moving to Australia. Burning Rice is her first collection of poetry, but she has previously had work published in Overland, HEAT, Island Magazine, Australian Book Review and Best Australian Poems 2010. In this chapbook, Chong engages with her multicultural and multilingual background to explore a range of images and structural approaches, building multi-layered connections between different generations and geographies.

There is a strong suggestion of personal involvement in these poems, but they also feature critical inflections that indicate that much more is taking place. In some poems, famous literary figures and individuals taken from history extend the connections even further back in time, and also signal the poet’s move on a literary as well as a cultural scale. Chong connects her desire for linkage with family, culture and country to a broader body of critical work, invoking writers such as Lu Xun to identify her own philosophical agenda. Burning Rice identifies and expands entry points, but also observes closures and conflicts, with an occasionally bitter tone. Chong’s speakers are engaged in taking possession of figures and processes of creation, such as cooking, in order to create more optimistic conclusions for these isolated personas.

In the poem ‘My Hakka Grandmother’ Chong explores links between family and place, as the speaker imagines meeting up with her ancestor and being introduced to and embraced by spaces central to her family’s history. Even though the titular figure is the speaker’s grandmother, her youth has been restored and the speaker’s own time has been frozen:

The impossibility of the scenario brings to the foreground the element of wish-fulfilment and longing, both of which permeate this piece, along with the desire for connection with historical homelands and processes. The speaker’s geographical, chronological and linguistic distance from her grandmother and Hakka ancestors is displaced in favour of an enforced, shared understanding: the grandmother features as a character, suited to the speaker’s desires, rather than as a speaking figure in her own right.

This is not an inherently problematic strategy, but a deeper reflection of the speaker’s desire to exercise greater control over her own identity, imagining a communal and predictable relationship between herself and her grandmother. Traversal of space frames the poem, but at all times the reader is aware that the speaker is only using figurative language: she cannot actually move, nor is this imagined unity possible. The acts of braiding hair, speaking together and sleeping are deceptively simple tasks, but are linked inextricably with acts of sharing and equality; all of which are denied to the speaker.