Caitlin Wilson Reviews Rebecca Jessen’s Ask Me About the Future 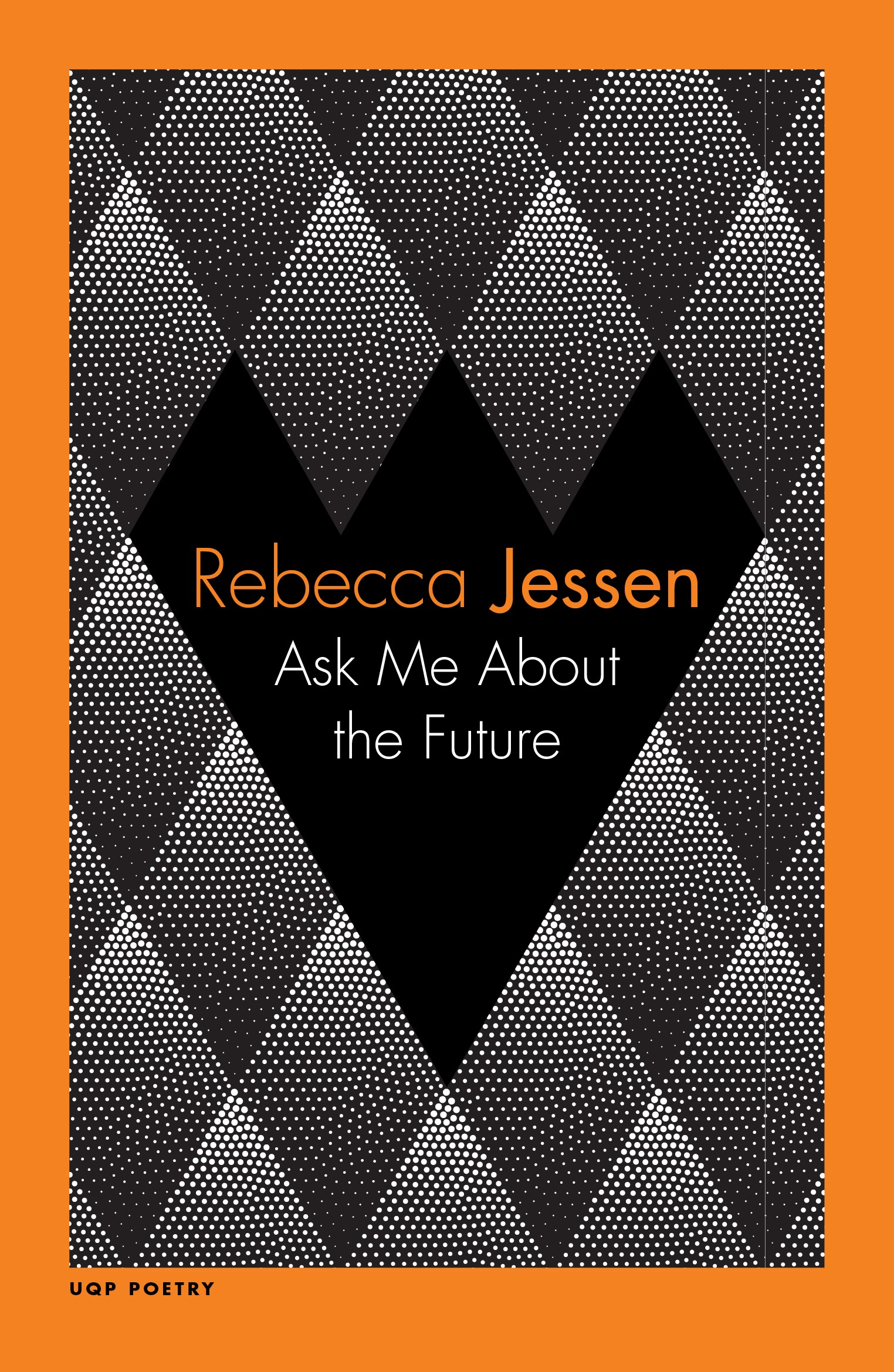 Ask Me About the Future by Rebecca Jessen
UQP Books, 2020

Is the future something to fear, or is it our saviour from the present? We have no idea what’s coming; we hope it’s something better, but suspect it’s only getting worse. In 2020, it is hard to be optimistic without caveats; you’re not alone in thinking of what lurks around the corner, or off in the distance, brings about a spike of anxiety. Is there still space for seeing what’s to come as a haven? Rebecca Jessen’s second literary publication but first poetry collection, Ask Me About the Future, though written in the Before Times (pre-pandemic), is a timely call to face our fears, to wade into the unknown with Jessen as our intrepid guide.

Ask Me About the Future is poetry as cartography, winging its reader through ports of bittersweet nostalgia and the rough sea of selfhood. The collection’s poems are waypoints; when followed, they reveal how quotidian occurrences and dramatic moments alike form a winding path through our lives. This churning journey whips up emotions like seafoam. The first poetry collection from Rebecca Jessen, author of 2014’s verse novel Gap, confidently, traverses the intimate, familiar spaces of beds and hometowns, suburbs and birthing suites. Gap, too, was shaped by a juicy preoccupation with connection, escape and love in all its forms, a fascination Ask Me About the Future takes up and extends. Here, Jessen’s potent sense of unbelonging, purposeful and melancholy, captures the feeling of waiting on a better world. Jessen describes these poems as ‘launch pads, not escape hatches’, a guide rail that is apparent in the collection’s concern with our propulsion into the future, as well as its refusal to sideline the past’s best efforts to tug us back down to earth. ‘11 Trippy AF Poems About the Total Eclipse’ recalls the 2017 total eclipse as ‘spying on the sun’, and suggests that ‘in the future we will look back fondly / at the pictures / and say things like / remember when / I Survived Totality 2017’.

The collection’s commitment to rocketing onwards doesn’t prevent Jessen from turning her gaze to matters of the present. A revelation of the imperfect present offsets a promise of goodness to come. In ‘triage’, the speaker says ‘there is no here. not for you.’ The future, on the contrary, appears in the collection as a place of progress and freedom. This is perhaps most explicitly explored in ‘Go Farther in Lightness’, a vision of a queer future viewed through a rocketship-shaped lens of retrofuturism. Jessen’s reflections on the past and present are the foundations from which her future imaginings sprout. Love is a major theme – familial, sexual, romantic. Jessen’s work deals with the ephemeral reality of emotions. As much as this collection looks forward, it is also a semi-nostalgic still life on past love and old family homes. Like in ‘some days’, where the speaker tells us ‘home is a big-screen TV and a three-tier cat scratcher’, and that ‘Mum’s place is like a time capsule. yet to be sealed’. Or in ‘prepare to merge’, where the central couple has become ‘the stock photo of ‘couple cooking’. ‘I keep my domestic past / folded squarely in my back pocket’, the speaker of ‘prepare to merge’ confides. ‘The Birthing Suite’ is a quiet epic, told from the perspective of an older sister as her younger sister gives birth, its sweetness and angst a perfect encapsulation of family drama. The ebbs and flows of intimacy are starkly painted, pinballing between contentment and anxiety. In ‘digging into eternity’, the speaker finds herself

Here, photography is a method of capture beyond the obvious – it splits the self into pieces, splits time into ‘now’ and ‘later’. The present is vivid and flavoured; the juxtaposition of metallic and tea-soaked a palate that distils the bittersweetness of losing yourself in love. These pieces feel crafted by a poet with skin in the game. Jessen’s authority on love and dating translates to humorous, cutting observations of contemporary text relationships and dating app woes. Jessen gives space for the unromantic romance of modern dating – in ‘(after) HER: dating app adventures’, the heart emoji is a repetitive, hollow marker between stanzas filled with txt spk, pick-up lines and winky faces, a distillation of the dating app game into the parts of its sum. (Jessen also asks the real questions here: ‘is it wrong to click ♥ because I think your Burmese is cute?’) The lived-in feeling her poetry arouses continues with her musings on twenty-or-thirty-something adulthood. In ‘The Late September Dogs’, blunt sentences are second person peerings into older-young-adulthood:

Encapsulated in these poems is the quiet drama of being young-ish, playing with phrases that bounce around social media as much as they bounce around our heads. Jessen softly satirises the language of millennials, her self-deprecation reflective of a generation (mis)-characterised by an odd combination of self-obsession and self-loathing – ‘Season 1: 12 Episodes’ begins with ‘1. My life becomes a series of consults with Dr Google.’, and ends with the pithy ‘12. My life becomes a series on Netflix no one binge-watches’. ‘Self Portrait as Index’ similarly investigates the self as a series, indexing terms with the ages to which they correlate. ‘Chronic emptiness, 18–31’ and ‘dole bludger 18, 25, 30–31 / see also underemployed’ dwell with ‘aunty 21-31’ and ‘queer 18–31/ see also lesbian; soft boi’ in this systematic, funny-sad attempt to define the self. Jessen’s poetry, romantic and otherwise, is formed and informed by queer existence, explicitly and implicitly. Poems like ‘sillage’ beautifully engage with queer eroticism, painting desire with olfactory notes of ‘black plum and aniseed / late summer / cherry’ and ‘top notes of acetone’. Queer love poems still feel radical in their own vital way, and ‘sillage’ is a gem.

Pages: 1 2
This entry was posted in BOOK REVIEWS and tagged Caitlin Wilson, Rebecca Jessen. Bookmark the permalink.
Caitlin Wilson is a Melbourne-based writer and critic of film, literature and poetry. Her work can be read in Voiceworks, Flip Screen, Rough Cut, Antithesis and Mascara Literary Review among others. She was recently accepted into the Master of Studies in Film Aesthetics at The University of Oxford.