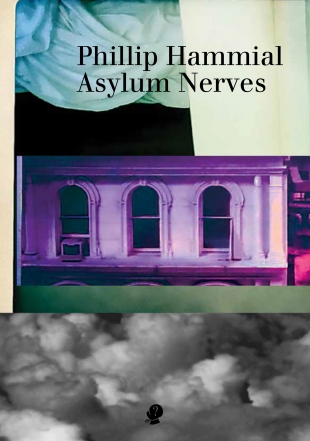 Poems don’t need condescension any more than we do. If we pick up a book and the poems come to life only at a certain page, maybe it’s our brain that needed a refresh. Philip Hammial is certainly up for a refresh of everyday culture: of foodie-ness, for one, such as in the high school project scene of ‘The Float’, where food is garbage and his art teacher gives him an A; or the vegetables of death in ‘The Vehicle of Precious Little’. There are enough stories in his poetry – represented here through a selection from twenty-five collections – to replace a whole bookshelf of novels.

Hammial is a poet of at least two turns, meaning that he follows Jasper Johns’ ‘legendary instructions’: ‘Take an object. Do something to it. Do something else to it.’ If we substitute idea or concept for object, there arises an interesting comparison between poetry like Hammial’s and conceptual poetry (or between Johns and conceptual poetry). Where Hammial tropes narrative or theme, and Johns appropriates images which are then recycled, we might ask whether conceptual poems take a concept and do nothing to them, or do one thing. If we think of the best-known examples – Kenneth Goldsmith’s book-length Day or Traffic – there’s a satisfying radicalness in thinking of them as pure curation: of zero intervention. This is, of course, not the case: the poems have undergone at least one action of ‘something’: the medium has changed, the original newspaper and broadcast are published in book form. Yet other texts, such as Goldsmith’s ‘The Death of Michael Brown’, underwent at least two modes of change: an autopsy report given as a reading, its language has also, according to Goldsmith, been given ‘minor tweaks’. What of another press-worthy conceptual work, Vanessa Place’s Gone With the Wind tweets? Are they, as tweets of a whole novel, following Johns’ instructions or not? There is a change in medium, from book to internet, yet the twitter constraint of 140 characters means that the tweets are fragments. Is this one thing or two? Perhaps it’s a new grey area. Perhaps this is too circuitous a way of saying that different kinds of poetry can be criticised in simple, broad terms as having done too many – or not enough – things to be interesting.

For my money, Hammial is generally on the money in his selection (I’d drop the unlively ‘SOS’, though). The prose poem ‘Possessions’ tells of a man who carries his belongings inside himself, including his clothing and his dinner, which he then eats. The following poem, ‘Runners’ features a man wearing ‘fish shoes’ who is winning a race through a river, ahead of men wearing ‘rabbit shoes’. But then we learn that the race takes place over equal amounts of water and dry land: the winner, then, is ‘anyone’s guess’. (This impasse of equality is overcome in a later race poem, ‘Grand Prix’, where it appears that ‘a bicycle built for seventy-six’ nuns will beat ‘a bicycle built for twenty-two’ monks.) Less satisfying is ‘Wheels’, about a man with wheels who has them surgically removed to ‘stand on his own two feet’.

Hammial’s prose poems mean narratives and characters. There’s a lot of men, or, as Avital Ronell might say, a lot of loser sons – the better kind, who have read and understood Freud. Take the narrator of ‘The Country Is Belgium’, who appears to be trapped in a nightmare tennis contest with a ‘huge man’ named Flowerkranz: ‘I always lose’, he says. Or there’s Anthony Glitz, the patient of Dr Eva Plotz (a memorable woman character), who when taken to the woods to release his demons can’t, in the event, let them go. The drive back to the city has Dr Plotz surrounded with demons and detritus, as if an allegorical victim of the helping professions—such as academia. Yet, while Ronell’s sons are defined by fighting with their fathers, Hammial’s narrators – in the enjambed poems – are often haunted (if haunted is the right word when the dead have a physical presence) by their mothers (their grandmothers are another story).

Poems such as ‘Of Tubs, Sailors & Inflation’ and ‘Mad About Me’ resemble late Ashbery in their claims and tone, but both rely on narrative intentness and circularity. The latter is a signature move of Hammial: there are enough examples in this collection to suggest an alternative grouping, of poems that repeat their beginnings and those that don’t; whereas Ashbery relies on a particular enunciatory drive. More interesting is ‘What I Do In A Horn’, which flirts with aspects of lyric – address, persona, feeling – asking us what kind of person is saying this, and what is their situation? The scenario of being in a horn (what kind of horn, exactly?) is described in tones and terms by turns Borgesian, cliché, practical, novelistic, pathetic, parodic (of who? Beckett?) and tricky:

The poem’s last anaphoric stanza is the Kafkan ‘In a horn / I’m home safe’. A horn can be both corner and room, where ‘Beautiful it is to be unnoticed’, as Kafka wrote in a letter (Ronell calls Kafka ‘perhaps the best of the loser sons’).

A short lyric about ‘Money’ is not about doing things, but about the truth and image of getting rich: a rhyme implied, yet not supplied till seven lines later, by the first line: ‘It’s in a ditch.’ It might seem old-fashioned to think of money as having material substance, for the rich at least; for me there is something profound and timeless about this poem with its rich people jigging hand in hand, distant from the dirt they once had to climb in to get the money; but I can’t help seeing wigs and knickerbockers.