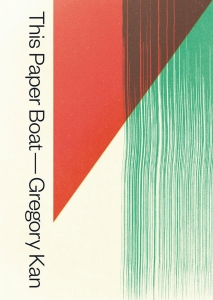 Kan observes that he ‘reached to Robin Hyde’ as one of a set of figures to help him through his enforced departure from New Zealand to undertake military service in Singapore. Hyde, he argues, was a useful model because ‘she had these really intense experiences that place and time made more difficult for her. Even though she ended her own life when she was young, she was still someone I could learn a lot from.’ In an interview Kan describes his ‘extended séance with Hyde’, in which he ‘wanted Hyde to take me and the work to places I could never have anticipated.’ In the resulting poems he records his travels to locations associated with Hyde, such as Island Bay beach and ‘Laloma’, her childhood home at 92 Northland Road, Wellington.

The first poem in the collection captures the atmosphere of Kan’s visit to ‘Lalo-ma’ which means ‘the abode of love’ in Samoan:

In his quest to find Hyde in her former home, Kan perceives the evanescent interrelation between her writing and place. He realises that he is reliant on mate-rial traces to resurrect her spirit: ‘I don’t know anything about / the past except / for what the past has left me.’ Being in places associated with Hyde enables Kan to ponder small gaps in her biography. Standing with water around his ankles at Island Bay, he thinks about the pair of shoes that Hyde lost in China as a war correspondent: ‘I wondered where those shoes went, and how, and what they did.’

Kan has said that using Hyde’s work as a lens, or a path, gave him permission that he would have struggled to grant himself in any other context. To lend the dialogue a certain intimacy, he has picked out turns of phrase from Hyde’s personal correspondence. By combining his writing with Hyde’s Kan is able to be more open about his own life and family heritage, which has also been marked by tragedy. One of the moments he touches upon in This Paper Boat is the desertion of his Chinese grandmother by his grandfather bound for Singapore. She later made her way to Singapore and looked after her husband’s new family almost singlehandedly, finally ending up demented in a rest home, washing dishes in the toilet. Another poem concerns his father’s attempted suicide with a gas heater and a large bag over his head after losing his livelihood.

On the surface Kan and Hyde are vastly different in terms of age and ethnicity yet Kan engages with Hyde like an intimate. He identifies closely with the more harrowing aspects of her short life, blending them with moments of trauma from his own experience. Kan ‘channels’ Hyde at crucial moments of distress, as when he enters into her drug-affected consciousness after the stillbirth of her first baby:

Outside her window, the trees collapsed, returning as toys, and she beat the toy trees with her toy hands. It was time to go to sleep. Don’t go away yet, nurse. I. said. Little white face, black hair in small ring-lets. Not yet cold to touch.

Kan has said that he is interested in trying to represent trauma, especially the stillness above and turbulence beneath. After this harsh experience at the age of seventeen and extended periods of hospitalisation for mental illness, Hyde took various substances to assuage her recurrent depression. In Kan’s poem there is a certain drugged calm, though nothing looks right − the bereaved mother’s mind is skewed, awry.

Hyde was sent to Sydney for her confinement; a common practice for pregnant New Zealand girls in the early twentieth century. As Michelle Leggott observes, the infant Robin was buried in an unmarked plot in a vast metropolitan cemetery that Hyde’s Australian friend Kay Brownlie christened ‘the daisy home’ because of the multitudes of white defiant daisies lifting their heads from ‘that awful red soil, which is like an open wound’. After Robin’s death Hyde took the baby’s name for herself, creating a new textual identity in the process.

Throughout the book Kan uses ‘I.’ for Iris but it might also be read as the ‘I’ of the poet. In the course of one poem the ‘I’ and ‘I.’ are used interchangeably to reinforce the fusion that Kan has sought to achieve:

You sound like you’ve eaten a lot of potato recently, he said. Jiak kan tang translates as ‘eating potato’, or ‘potato eater’. This was an expression I heard often with regards to my accent. I. was caned for not getting pronunciation right in singing class. Swallowed a potato have you, her teacher said.

The potato metaphor conveys the sense that the two writers are outsiders who are frequently misunderstood. Both examples relate to the ways in which Kan and Hyde communicate with others, appearing ‘stuck up’ in Kan’s case or ‘unmusical’ in Hyde’s. These frequent shifts from Kan’s perspective, to that of Hyde – or Kan ‘inhabiting’ Hyde – demonstrate the potential for fluidity between seemingly unrelated selves. These deliberate identity slippages, along with Kan’s refusal to explicitly ‘frame’ poems through conventional markers such as titles, leave the reader feeling disorientated at times. Naturally Kan is under no obligation to be a responsible literary historian, instead he chooses to create an unreliable and experimental account of a poetic predecessor.

Pages: 1 2
This entry was posted in BOOK REVIEWS and tagged Brigid Magner, Gregory Kan. Bookmark the permalink.
Brigid Magner teaches literary studies in the School of Media & Communication at RMIT University. Her PhD research was on trans-Tasman literary culture. Magner's current book project is titled On the Trail: Reading Literary Places in Australia.