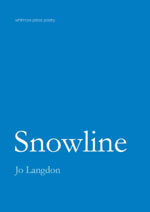 It can be argued that one way to begin to make your ‘mark’ is to settle on a theme; in marketing, it’s a handle or a simple angle. In creative realms, it can be an oeuvre or a period, with a descriptor. Ideally, it should never be held too close to its object/subject for fear of typecasting, but for an emergent poet, it may well be the thing that reassures readers and helps them with a doorway into your work.

For a first chapbook, a theme can also be the way to find publication. Jo Langdon’s Snowline is the 2011 winner of the Whitmore Press Manuscript Prize, a welcome initiative for emerging poets from the Geelong-based Whitmore Press. It’s a deserving winner, and a pleasure to experience.

Langdon writes in broad strokes of place and natural phenomena, the content of her poems veering from snow (most often, and the primary motif) to Geelong (she’s in there, and how!) This is a genius pairing of themes, and I argue that it is this marriage that forms the spine of the work. ‘Leaf Storm’ shows this within a few lines, opening with

then, three short stanzas later, resolves the point of connection into a suburban summer street; the murmur of cricket scores being discussed near parked cars, dead leaves moving in a wind eddy, birds in a clear sky above. This overarching presence inverts what you feel you’re being led to with poems such as ‘Gösser Straβe 79’ and ‘In Wien’ with their European mountains, and collection of travellers’ place names. Yes, these are beautiful poems. Yet might they function more as signifiers or, perhaps, simply as the original source of that prevalent snow? No, we are instead transported to a junction of this indescribable substance – the snow – and the most distilled parts of a bayside town in its quiet, warm moments. Langdon has sideswiped – ignored, even – industria and social pains (the more expected terrain, for poetry of large towns like this) and has given us strings of words like this from ‘Jetty’ in their place:

The most important (and impressive) aspect of this book is that the poems undoubtedly unite and function as a suite, best experienced whole. The individual poems give up their innocent, near-placid lines into service of this roundly organic shape. In part, this shape comes through rhythm alone; the opening line of each poem speaks directly to its closing line, affecting the text between them with a sense of being encircled. There may be formal conventions, such as haiku, evoked that contributes to this cohesion. Reading Snowline is like looking into a pond, but not for any kind of reflection, but more for what’s underneath. Langdon does this most effectively with a babushka doll-like movement akin to a camera panning in – the unwrapping of image-layers until a moment is caught feels like satisfying time lapse. This effect is best seen in the final poem ‘Pevensey Street’ (a picturesque and bijoux square in one of the oldest residential parts of Geelong) which begins with window frames and chimneys, then swoops down to Corio Bay, finishing with:

As a stylistic device, it’s arresting, and it will be interesting to see whether it becomes a feature of future work for Langdon or whether it’s part of this world only, this container of place and snow. Snowline is a measured and carefully wrought debut that reminds us of the way unexpected combinations create the best alchemy.

This entry was posted in BOOK REVIEWS and tagged Jo Langdon, Melinda Bufton. Bookmark the permalink.
Melinda Bufton is a Melbourne-based poet and reviewer. Her work has appeared in a number of publications including Cordite, The Age, Rabbit, Southerly and Best Australian Poems. In 2014 her first poetry collection, Girlery, was published. Her follow up collection, Moxie, was published in 2019.