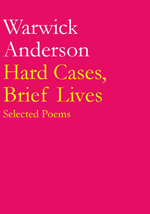 The manner in which poets divide their lives is of enduring, perhaps obsessive, interest to me. More specifically, I’m interested in what they choose to reveal or emphasise, and what they let slide to the background of their visible identity. Warwick Anderson’s Hard Cases, Brief Lives is a collection of work wrapped in his role as a medical doctor, like brown paper around a textbook’s cover. Anderson has an extensive career in medicine, and has held research positions internationally in population health and the history and science of medical practice in diverse cultures. The title alludes to his profession, and the back jacket offers a long, jubilant blurb from Kevin Brophy, which begins ‘What might a doctor say when he turns to poetry, or, more interesting, what kind of a doctor might a poet make?’ He places Anderson in a tradition by name-checking other poet doctors; William Carlos Williams, Peter Goldsworthy. He seems in awe that you could do both.

So what does all of this do to the poetry? It shows us his quiet gap moments, to start. These remind me most of all of a friend-of-friend’s blog some years back that was called ‘doubt’, and was essentially a container for listing thoughts generated in such moments, the pricking at the edges of our own declared narratives. We are given flickering pictures of early morning starts at the hospital in ‘Winter, Melbourne’:

Lingering doubts about relationships, and the hazy figures they contain, occur against a backdrop of the inner city, mainly Melbourne. In many of the poems there is a silent but strong sense of being about to start work, unspecified but somehow present. The occupation of medical doctor is often heralded as a calling, and there are times where Anderson meets that expectation with his compassionate curiosity about patients. In ‘The History’, which appears early in the book and ponders the life of a woman via her case notes and the maladies they catalogue, we receive this whole. I prefer the moments he where moves beyond the descriptive, as in ‘Single Digit inflation, where we see something grittier, murkier and more evolved:

This is now poet-as-poet, forget the doctor influence. There are appealing echoes of Sylvia Plath’s Cut (‘What a thrill/My thumb instead of an onion/the top quite gone/except for a sort of hinge’) and a kind of willing move toward the strange that is present in the best poems of the collection – where the poems adopt a tone of self-awareness and curiosity. In ‘Bistro Jersey’, a poem that never exists forms its centre:

Where poets have other occupations in addition to writing, there is quality material to be mined. Yet, I believe it can be more for the reader when we become temporarily unhooked from thoughts of that other occupation. It is paradoxical; there is no separating out the ways in which someone’s experience – including work – colours their art. However, in hindsight, I would have relished Hard Cases, Brief Lives more so had it been given to me without its wrapper of doctor-ness. The work speaks for itself, and must be allowed to seep into our reading minds without expectation of vignette or case study, without too rigid a frame around it.

This entry was posted in BOOK REVIEWS and tagged Melinda Bufton, Warwick Anderson. Bookmark the permalink.
Melinda Bufton is a Melbourne-based poet and reviewer. Her work has appeared in a number of publications including Cordite, The Age, Rabbit, Southerly and Best Australian Poems. In 2014 her first poetry collection, Girlery, was published. Her follow up collection, Moxie, was published in 2019.