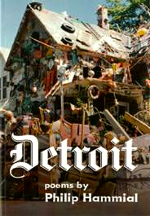 Philip Hammial is the author of over a score of poetry collections. With his new book, Detroit, he returns to the city of his birth taking us, the reader, on his helter-skelter ride. From the first, a poem entitled ‘Mayday’, we are already travelling at break-neck speed, suddenly materialised in an alley with three unlikely characters, plus a bear and a looming summary execution. We enter and leave the poem in the thick of action and must imagine for ourselves the backstory and outcome. In twelve short lines I am already empathising with the un-named first person speaker to imagine him slipping free of the medieval fresco sky-hook descending from the heavens.

This feeling of being in media res sent me back to an earlier book, Skin Theory, where Hammial questions ‘Why go back? Even/ in memory why?’ (‘Detroit’, p55, Skin Theory). His language – never fully distancing itself from the violence of his home city – underlies his word-choice and the breaking up, the severing phrases: ‘Pull it tight, make/it hurt until what’s left is pulp, a fiction embellished/ with canned laughter?’ (‘Emilio’, p37). Substitution of words ‘If the coast is clear/we’ll bother all the way, fifty miles/ of tough dove until we’re back/ at the dying part.’ (‘East of Eden’ p.36) also plays a part as does the way he verges on figures of speech, but pulls back in a literary coitus interruptus; ‘If bath you must, be sure to scrub within an inch.’ (‘Be War’ p65)

The poems in Detroit maintain a coexistence of both riot and precision; words energetic and resistant are often within carefully assembled structures. Contemplate the joyous nursery rhyme sound-shape in ‘Vision’ or this:

There are list poems, circular structures, sonnets, moments of autobiography and musicality. And yet it is not just the language and structure, but the social and political commentary that carries the weight in these poems: ‘ …get a life/ before the Dow falls/ again, an all-time low, nothing/ for a rainy day, Ginger & Fred/ hoofing it in a parking lot of burned out hulks’ (‘Effluent’ p.48). In this world the Flag is American and Uncle is Uncle Sam, black slavery alluded to: ‘Cause of death: Master’s switch/ from switch to cane’ (‘No Djinns’ p.79) and consumerism critiqued as ‘booths on every corner’ (‘Redemption’ p78).

His poems crowd with characters. In ‘Now’ I counted eight: an apprentice, every man, God, Thomas, Loma, Dolly, the Wizard and some hooded monks. There are enough pony boys and 100kg femme fatales to satisfy a life-time of wanderings, though not all of the characters in the poems are dealt with kindly. ‘Shame’s Parabola’ has a parade of characters told with waspish anger and name-dropping that is reminiscent of Catullus. The poems appear autobiographical – but are they? Hammial has a vast wealth of experience as a sailor and later travel, and as a curator of outsider art to draw on to resource his work.

Detroit itself is a real city, of course, a lived and an imagined city that is possibly experiencing a surreal final episode in its current state of bankruptcy. We look not so much through a lens, but through a grimy window of a city’s decline. Detroit is effectively a world-making enterprise, a translation of something strange a world away from most of Australia.

Martin Duwell notes that Hammial polarises audiences.1 The writing has huge pace, in part due his short page poems, but there is a danger that the reader may not remain aboard due to frustrations with obscurity, or an older man’s obsessions with sex and medical procedures. And yet there is something exquisite about his descriptions: ‘In this one: a row of toilet cubicles, locks clicking/ open/shut’. (‘Chambers’ p.51) or

Those readers willing to sustain engagement are likely to be won over through the sense of narrative urgency he imbues. The more I read the more I am excited by this take-no-prisoners writing. As Hammial says ‘Now that I’ve finally mastered/ the art of remembering my glasses/ I keep losing my wings’ (‘Sartorial’ p.18)

This entry was posted in BOOK REVIEWS and tagged Angela Gardner, Philip Hammial. Bookmark the permalink.
Angela Gardner's verse novel The Sorry Tale of the Mignonette published by Shearsman Books, is a UK National Poetry Day recommendation for 2021. Poems from it have been anthologised in The Forward Prize 2022 and Live Canon International Poetry Prize 2019. Recent poems have been published in The Yale Review and West Branch, USA; Blackbox Manifold and The Long Poem, UK; Plumwood Mountain and Southerly, Australia. She lives in Ireland.