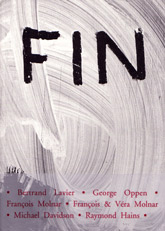 Don't let the relative coherence of these interviews fool you: when I conducted them I hadn't spoken French regularly for at least six or seven years. That aside, I had barely engaged with the world of poetry in Australia over the past two. All this added up: playing back the three hours or so of recordings from the interviews was an at times painful experience in which I had to cyclically shake my head at botched phrasings of the most simple questions or comments in French.

Generally speaking, however, all the interviewees were quite sweet, overlooking my out-of-touch language skills, concentrating on my – and their – earnest interest in poetics. I guess, as the poéte australien, I also exuded a certain scent of the pheromone which affords a degree of forgiveness and patience. Or pity.

Of all these interviewees, however, Pierre Brullé made me by far the most ill at ease; not because he was an archetypally arrogant Frenchman – he was most polite, in fact – but because he was comparatively reserved and concise in his manner, which in turn left more silences for me to fill bamboozingly with French. That, and I think he had a client downstairs waiting to purchase a few works.

Brull?¬© directs a private gallery in Paris' 6th arrondissement, only a few minutes walk from La Sorbonne. The small white space is awash with swatches of expressionistic colour contained, barely, by frames; though I don't take the time to examine the works more closely.

Brullé is a slight man, perhaps in his forties, and as I said above, he is quiet, reserved. He is himself not a poet. However, he has worked closely for a number of years with Jean Daive on the journal Fin, the reason why I am here.

Daive, who has published six individual collections, translated the poetry of the German Paul Celan and of Robert Creeley, and whose work is included in leading publishing house Gallimard's Anthologie de la poésie du francaise du XXe siécle, has conceived and published two other journals in his time: Fragment, from 1970 to 1971, and Figue, from 1989 to 1992.

Fin, first published in 1999, is the third instalment in the series. Brullé who produces and designs the journal – Daive edits it – describes it simply as 'a journal of contemporary creation' whose goal is to provide a site for the coexistence of text and image. Being one of the few journals I could ever describe as “sensual,” it certainly succeeds in this regard; is demonstrative of an alternative approach to what is habitually framed by the term “literary journal.”

A short work of exactly 72 pages per issue, it is printed in black and white on matt paper. The cover of each issue displays a rough sketch-like work by a contemporary artist such as the Canadian Robert Racine or Frenchman Maurice Rapin, who, Brullé points out, was a friend of the Belgian surrealist and semiotically atypical artist Magritte.

Inside, the journal follows this sketch-book aesthetic with pages of serifed prose and poetry, which are intersected by facsimiles of annotated drafts of poems – such as those seen in Eliot's original manuscript of The Waste Land; of correspondence between poets; of diaries and notebooks; of original manuscripts such as that of a paper delivered by Paul Celan in Israel. That paper, Brullé says, was published, in its original German, as is, 'with the paper folded like that, with the back of the page too – It's the [original] document that we published – Some [readers] regretted that the text wasn't translated but it was voluntarily thus. Fin is not about commentary.'

Fin, instead, is about creating a very physical link between conception and realisation, an exploration of thought as it relates to the finished piece. In this vein, Brullé tells me, Daive once defined the journal as a “fabric of thought,” a metaphor that places further emphasis on the physical twining of thought and process. This representation also has the (perhaps) intended effect of re-establishing the written work as an original composition, as an object imbued with a Benjaminesque aura – a presence beyond the textual and beyond the infinitely reproducible font-realm of the digital.

Just as it is an engagement with the physicality of thought, Fin is equally an active engagement with the work of Daive and, to a lesser degree, Brullé's peers. While a few new authors appear in its pages, most works are commissioned or selected by Daive from those whose work he admires and is associated with; for example the Americans, objectivist George Oppen, and Black Mountain associated Robert Creeley – who, according to Brullé, is a strong proponent of the interpenetration of text and the plastic arts.

The main emphasis, meanwhile, is on the highly metaphysical, minimalist and écriture-interrogating work of French poets and authors such as Anne-Marie Albiach, Claude Royet-Journoud, Francis Cohen and Roger Giroux, whose 'Journal d'un poéme' is a pure, exquisite journey through the skeleton, muscles and bone of a poem, a facsimile doused in smudged typewriter impressions and annotations in black ink.

Place is also given to the texts and works of a wide variety of visual artists whose cover art announce the aesthetic of the journal and whose longer series, reproduced among its 72 pages, provide a visual continuation to the physical nature of the written word and its facsimiles.

It strikes me how utterly different this journal is to any in Australia where, in print at least, most established literary journals are attached to universities – the example of HEAT, whose survival was only guaranteed by grafting itself to the University of Newcastle again comes to mind. There are of course exceptions, usually associated with the “Yoof of de arts” scene. And the web is a different realm. But overall, perhaps this lack of independence can be conceived as expressionistically inhibitive, which is not a statement against the important charter of the Southerlys and Islands of this world.

Instead, I look to the proliferation of rough-as-guts zines here, with their diversified (although generally photocopy) aesthetic and highly personalised, un-institutional editorial bent, and which oz poet Zan Ross has indicated she prefers as points of publication because they afford her more opportunity to experiment.

Perhaps one could conceivably, in contemporary Australia cultural terms, refer to Fin as an extremely sophisticated and elegant zine (ie, my kind of zine!), an example of how solid production values do not necessarily compromise the individual aesthetic and editorial charters of a publication. Of course, it helps if you are being funded by the Centre National du Livre, the French equivalent of the OzCo's literature board.

Such ventures, nevertheless, are generally aimed at a certain cultural modality; in Fin's case this requires a disposition to engagement with art and text at the level of art and text itself. Other than the works themselves, there is very little commentary on them, nor are there any biographical details. Brullé himself, with a plastic arts background, was not familiar with a lot of the authors when he first started work on the journal. 'But one needs a certain freedom to let oneself go into what is proposed,' he says, 'without asking those questions: “What's that?”, “Why is that-?”, etc.” It's all about the narrative of artistic engagement. And the art.

This entry was posted in INTERVIEWS and tagged James Stuart, Pierre Brullé. Bookmark the permalink.