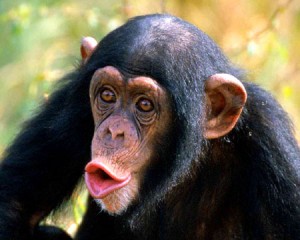 A recent international scientific report suggesting chimpanzees should be admitted to the human family – because they share 97 plus percent of our functional DNA – has produced worldwide confusion. First there was the problem of whether or not the formal admission was coming a little late.

Clearly, retrospective admission papers would have to be provided for the many chimpanzees who have served in various levels of world government. Then came another problem: if chimpanzees were to be formally inducted into the human family, which chimpanzee would accept the induction papers and respond on all chimpanzees' behalves?

To allow one of the existing chimpanzees in government to respond on behalf of all chimpanzees would obviously politicise the process and lead to potential factionalism within the chimpanzee section of the human family upon their admission. A chimpanzee outside the political system was clearly required in this situation.

But then there was the issue of which chimpanzee from which jungle. So many jungles had claims. Many chimpanzee family trees went back thousands of years and others were too dense and collected into forests which disallowed human entry, even with chainsaws. So, it was thought, there may be chimpanzees with an even higher percentage of human DNA equality yet undiscovered in the jungle. This would render the entire exercise useless and could possibly lead to calls of tokenism from within the chimpanzee community.

The issue was at a stalemate and got worse when a representative of the orang-utan community – a militant band of monkeys (with some Australian parliamentary representation) – insisted that because their DNA level also shared a high 90s percentage with humans, they too could lay claim to entry into the human family.

This caused a huge ruckus at the orang-utan party meeting, with bananas and banana skins thrown, and general chittering and screeching throughout the hall. The meeting was abandoned and flies came in to prey upon the banana remains.

The flies, themselves with a 90-plus percentage of human DNA, also staked a claim for entry to the human family. They strengthened their argument, claiming they had been in family homes for centuries: where had chimpanzees and/or orang-utans been? And how many cans of chimpanzee spray do you find in human kitchen cupboards?

The situation became out of hand; no agreed cut off point for percentage of human DNA in an animal could be reached. Various insects and shell-bound molluscs – some of which claimed to have been in government for hundreds of years – also put in claims.

The latest we can report is that a paper has been tabled suggesting that the only way to make it fair for everybody is to make 100 percent DNA the requisite for entry to the human family. There was a loud outcry, mainly from the parliament of Australia. A chimpanzee outside the ranks of government then suggested that perhaps humanity – because it shares 97 percent plus of its DNA with chimpanzees – could be offered admittance, instead, to the chimpanzee family. This idea drew warm and furry applause from the Australian parliament.

Paul Mitchell is a contributing editor of Cordite.

This entry was posted in FEATURES and tagged humour, international, paul mitchell. Bookmark the permalink.