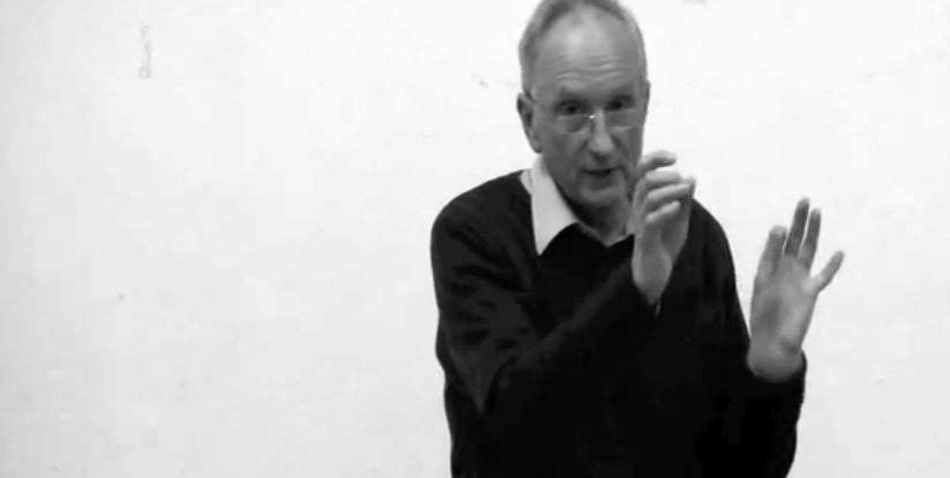 Image from Veer Books readings at the SPF 2012

Matthew Hall: Peter, as you came to writing poetry later in life than most contemporary poets, could you explain your interest in French philosophy and what impact this interest may have had on your poetic development?

Peter Larkin: I wrote some poetry before University but still thought I was a fiction writer until I’d completed one long and unpublishable novel in which very little happened (though a privately printed copy found its way into the Cambridge UL!). Interlude material for a second novel turned into my first published poem, Enclosures, but the prose traces very much remain. I’d already had an interest in the French Nouveau Roman and then discovered Derrida whom I thought was the most challenging philosopher around who couldn’t be easily ignored though I felt he was against my own instinctive grain in many ways. In the event it was Geoffrey Hartman’s swerve across Derrida that influenced me more because of the common reference point in landscape and Wordsworth. I started reading Derrida again at the time of his later work, particularly around the period of his engagement with Richard Kearney. Strangely, I didn’t read so much Merleau-Ponty until just a few years ago when some of the post-structuralist waves had settled and he was defiantly looming above the swell, though I did read quite a lot of Ricoeur throughout my ambivalent preoccupation with Derrida. All this made my own work doubly contorted, as I was relishing a post-structuralist rhetorical density but trying to get it to mutate towards more pacifically speculative or contemplative realms. Even more recently, the French writers like Marion, Chretien and Henry associated with the ‘theological turn’ within phenomenology have been a big influence, even a sort of confirmation to my own parallel but more submerged course.

MH: What, in your opinion have been some of the benefits of working as a lecturer and as the Literature Librarian at The University of Warwick in the development of your own singular poetic?

PL: The only teaching I regularly do is in IT and research methods, but I have taken part in seminars in the Centre for Research in Philosophy, Literature & the Arts over many years, and I have also learnt a lot from being the subject librarian for this area. Being at Warwick has exposed me to many currents, poetic, politico-ecological and theological and it has enabled me to build up stock in these areas and gain some acquaintance with the material as I do so. Not being an academic teacher has kept my mind freer for my own projects and in that way I have found it helpful to be a small fish in a big pond. My elaborated style must owe something to having dipped into hundreds of books, prefaces, chapters or conclusions over the years. I keep a notebook for anything that catches my eye.

MH: For those readers who do not know about the L=A=N=G=U=A=G=E Poetry versus Cambridge (or more broadly, European) divide, I was hoping you could address your own, what I see as uniquely identifiable ability to straddle both schools of contemporary poetry. You seem to have managed to find a place in the two most major English-language poetry developments in the past decades. May I ask how you see your own placement alongside these schools, and the development of your poetic as involved with, or removed from, the movement of these two groups.

PL: I’ve never tried actively to traverse the LANGPO-Cambridge divide and any sort of ‘place’ I might have in either is fairly low-key. Neither grouping has been exemplary for me in terms of practice but I have been considerably indebted to them both, particularly Coolidge, Andrews and Bernstein on the one side and Prynne, Riley, Crozier, Barnett and Wilkinson on the other. In addition, a number of North American women poets like Hejinian, Robertson and Wollsak and the two Howes have meant a lot to me. This has intensified my penchant for ‘riff’ type material and also to subjecting it to a complex or overlapping micro-syntax which slows it down and gives it a new obstinate weight, which in my case also extends to the use of internal rhyme or half-rhyme, particularly at the prosier moments. In terms of any poetic of my own, my ecological and ontological preoccupations have always demanded to come first and only after that has any more exact strategy emerged, so the influences above have become rather distorted or thinned out.

MH: Could you expand on this issue of your use of the material, from Wollsak’s and Robertson’s poetic, for example?

PL: Robertson’s The Weather (mostly written in Cambridge) has meant a lot to me with its elaborated prose refrains, and also Wollsak’s Pen Chants and especially An Heuristic Prolusion with its filigree inventiveness but underlying intensity of vision. I’ve not directly reworked any of this material into my own texts but my own writing has echoed and sounded its way across some of it. Often the material I rework or slide over in terms of generating a slippage in the phonemes to transplant invisible near-rhymes is overtly more distant from my interests or more often not poetry at all.

MH: Could you address your own change in approach as it has moved from Enclosures, or Wang Wei, to your work in the development of Roots Surfacing Horizon and now in the writing of Brushwood by Inflection? How has your approach to the work changed in the last decade?

PL: Enclosures had a very exact sense of terrain subsequently subjected to a number of speculative revisions or recodings in terms of how one might ‘read’ such places without losing their sensory immediacy. The Wang Wei versions were in some ways a side-line but allowed me to discover whether they could find their own way back to some of my main preoccupations by setting up deliberate limitations in the way of my usual means of working (‘Spirit of the Trees’ was put together with a similar concern for arbitrary impediments). My more recent work hasn’t changed in any radical way (and I like the idea that earlier threads might resurface at any moment) but the form has tended to settle into short prose clusters with verse tail-pieces (though sometimes these latter are absent). I find that a good working template rather than it being a deliberate aesthetic as such. The single more fundamental modification has been that, where I used to sometimes add a prefatory essay to a text, more recently I have incorporated that sort of ancillary material as a section within the poetry itself. This began with At Wall with the Approach of Trees where I literally reworked notebook material into five page-long paragraphs and called the section ‘Inflections’. I did something similar with Roots Surfacing Horizon which has a section in continuous unparagraphed prose and I am now working on a sequence called ‘Brushwood by Inflection’ which also has an unbroken prose section with broad margins where the material is deliberately more ‘secondary’ or discursive (though that does now have a very brief preface as well!). I had forgotten my earlier use of the term ‘inflections’ but it does indicate a move to a relatively more reflective or abstract type of writing which asks the reader to share a particular taking-off point, though I now want to run this as close to the ‘thick’ textuality of the poetry as possible.

MH: I was recently reading Gustaf Sobin’s Luminous Debris and came across the following quotation:

It is not every day that we realize we’re allowed to gaze into the contours of absence, into the specific proportions, dimensions, properties that absence, under a given set of conditions, has assumed. Is memory any different? Aren’t we continually running over the imprint, the deeply scored outline of vanished experience, attempting to read – in counterpoint – the plenitude of so many irrecuperable events, reading here what is eternally there?

These lines instantly brought to mind Sobin’s parallels with Merleau-Ponty’s The Visible and the Invisible, both of which I see having strong inflections (if I may so use the word) in your poetic and I was hoping you could speak to the influence of Merleau-Ponty, as well as Sobin, in your work.

Pages: 1 2
This entry was posted in INTERVIEWS and tagged Matthew Hall, Peter Larkin. Bookmark the permalink.
Matthew Hall is working on a dissertation on J.H. Prynne and Violence at the University of Western Australia and a series of poetic essays that pertain to the radical pastoral. His poetry, occasional prose and criticism have been featured in journals around the world. Hall is Editor of Cordite Scholarly.