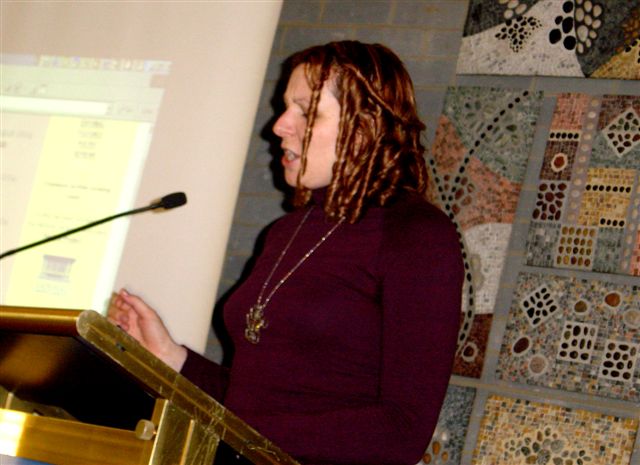 “You Talkin' To Me?” is a brand new CD compilation of Melbourne's spoken word talent, featuring the likes of Ed Burger, Sean M Whelan, Edwina Preston, Terry Jaensch, Dorothy Porter and Phil Norton. It's Emilie Zoey Baker's baby, but she couldn't have done it without the “knob-twirler”. Here she speaks with David Prater about many things, including meerkats.

The opening track on the CD, “SMS Me Baby” – I've heard you do that one live, in an unplugged kind of way – how did it feel to put that piece to beats, did it change the meaning of the poem for you?

What we did was we foraged music, we found different beats around the place and then we sort of stuffed with it and put gaps in it and did a little bit of scratching and then Tuffy the Great White Spruiker did his improvisational thing over the top. Now I couldn't imagine doing it without the music. It's evolved into – it's not a song and it's not what you'd call a spoken word piece, it's something in between which we haven't really figured out a name for yet. It's not hip hop … it's a reminder of hip hop.

There is that cliche that spoken word is somehow lacking and you need to put it to music to give it some sort of cultural resonance for people. I mean, there's a whole bunch of spoken word CDs now, some of them are just people talking …

Yeah, it's not the sort of thing you put on while you're getting ready to go out … you have to commit yourself, you have to sit down and listen to it. With this CD I want to give people the choice … you can put it on as background music or take it on a road trip.

So what would be your ideal listening environment for this CD?

I'd got for the whole road trip look for sure, because it takes you on a journey and then it brings you back and then it puts you somewhere else. It changes in mood a lot, from Dorothy Porter's darkness to Kieran Carroll's flowery goodness …

But what makes this one special?

Well, they're tracks, they're separate entities within themselves.

Is that trax with an X?

Almost all the artists on the CD are well-known performers … can you tell me about the kinds of performances you don't like?

Well, I always admire performers who are generous with the audience, who have something to give, like Mr Phil Norton. But the ones that stand at the mike and get pissed off at you and try to lay some heavy opinions down is not really what I'm digging.

What's the relationship between performance poetry and alcohol?

[laughs] Oh boy, they get on well, don't they? I mean, they definitely have a share house in my heart. I think it's possible to do spoken word without alcohol, but it seems to be something that everybody needs to loosen them up … I mean, I don't know of any readings that aren't in a bar.

So what do you do or take or think to get yourself pumped up before you go on stage?

It's like frustrated rock star stuff. Most spoken word performers I know really want to be rock stars deep down. I mean, come on. So there's that real element of dressing up and being dramatic. But I get hepped up on goofballs first …

Like, I try and be really silly and bond with the audience. It's always about the audience and I will often change things if I don't think the audience will cope with what I do. Although I always do really rude things if there are old people around, coz they tend to really love it. I don't know why.

I'm a bit of a meerkat fan.

Does the CD represent a moment in time?

It definitely does. I mean, two years ago was when submissions were sought … the poeple I asked were the people I was really looking up to and admiring and thinking wow! about … people like Edwina Preston and Kieran Carroll … people like that who actually don't exist on the scene anymore.

They're old school aren't they?

For you personally though, has that moment passed?

Tell me a bit about Matt Dufty, who seems to have done the lion's share of the music production?

He's a professional and very committed knowb-twirler. He's recorded heaps of bands … he just thinks in terms of music. You know, you'd leave something with him for two hours and come back and there's this amazing piece of music. 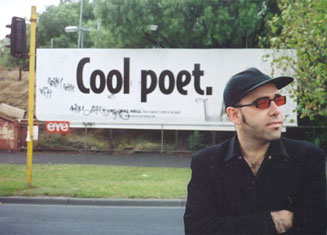 Do you have a favourite track?

I would have to say Phil Norton's track [Jimmy's Lament] is pretty good. I love listening to it. I sing along and pretend that I'm all jazzed up.

When was the first time you saw a spoken word performance and thought 'wow, I can do that'?

Phil Norton, definitely. It was in Sydney, about five years ago … I just went, 'my god', I didn't know that kind of art form was out there. It incorporates everything – theatre, writing, performing, music … you can't go wrong, it's so much fun, really.

You moved from Sydney to Melbourne four years ago … did you feel there was something missing in Sydney that you thought you might find down here?

No … Sydney's really competitive and really professional … everyone takes themselves a lot more seriously in Sydney. The attitude is really slick, they know their poetry, they don't read it off pages … there's much more of a professional etiquette, like this is actually their career.

So how did you find it when you came down here? I mean, there's been a lot of hype about Melbourne's spoken word scene, but what's your honest opinion of the variety and decency of the scene here? Is it really a good idea to have spoken word every night of the week when most of it's not really …

… that good? That's a really good question, because that's what everyone says, like 'it's great' but I've got to say I don't go to spoken word every night of the week. I think you have to find which format's for you. At Babble [Bar Open – Fitzroy] you can drink and talk and laugh and heckle but you can't do that sort of thing at the Water Rat [South Melbourne], you're a committed listener. But maybe it's great that there are so many nights, so that you can make that choice. They all bring different crowds and different poetry as a result of that.

Good answer! In terms of the people on the CD, Dorothy Porter would be considered a mainstream poet, but were there any other, for want of a better word, “famous” people you approached?

I wanted to get Michael Leunig, I tried really hard to get him because he's a poet I think, and he's just delightful, but no one's heard his voice, and I would have loved to have been the first person to whack that in, especially with some Michael Leunig-type beats – [laughs] some curly beats!

I notice at the end of Terry Jaensch's piece, the last track on the CD, there's a minute of silence and then some kind of … outtake?

Are you planning a bloopers CD?

[laughs] Oh man, if we had kept some of the stuff that was going on there … it was so funny, because there was this dog and it just had its nose in her groin and alicia just kept stopping and saying 'there's a dog in my groin' and it was beautiful, it was a moment.

This entry was posted in INTERVIEWS and tagged David Prater, Emilie Zoey Baker. Bookmark the permalink.
David Prater was Cordite's Managing Editor from 2001 to 2012. His first poetry collection, We Will Disappear, was published by papertiger media in 2007, and Vagabond Press published his chapbook Morgenland in the same year. His poetry has appeared in a wide range of Australian and international journals, and he has performed his work at festivals in Australia, Japan, Bulgaria, Canada, the United States, the Netherlands and Macedonia. He has also undertaken two writers’ residencies in Seoul, Republic of Korea, and has worked extensively as a teacher, editor and researcher. He currently lives in Stockholm, Sweden.