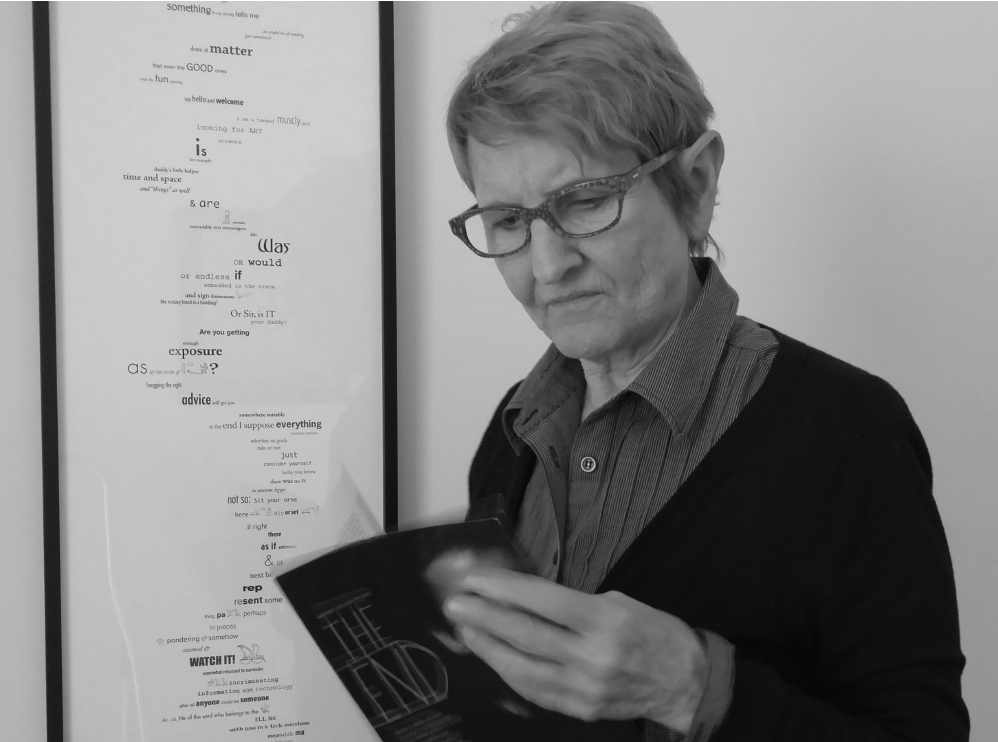 I think I was thinking of a big concept like ‘The End Times’ when I made up a theme for poems for this issue of Cordite Poetry Review. There is general consensus that the times we’re living in are endtimes. A few examples of thousands of cultural works on the theme could start with Dada at the beginning of last century, Maurice Blanchot and Samuel Beckett somewhere in the middle, Jean Baudrillard later on, Susan Buck-Morss, Slavoj Zizek – Living in the End Times, Esther Leslie’s Derelicts: Thought Worms from the Wreckage and Christine Brooke-Rose’s last work – a dark & comical exploration of the lead up to an elderly death, Life, End of. I could list countless speculative and dire investigations and reports into the catastrophes of climate change, permanent war and semio-capital’s rampant venality, land grabs, financial and social injustices. Basically, it’s a bit of a broken world.

But then, who am I to tackle a grand theme? It would sound pretty precious. In my own poetry I’m more likely to zero in on symptoms and effects. However, as someone who lost her faith in nihilism a little while ago, optimistically (and always also sceptically) I undertook the task.

Predictably, having settled on THE END as a theme, I started to notice all kinds of endings everywhere around me. There was a Samuel Beckett symposium at Western Sydney University titled The Endlessness of Ending. Of course, Beckett is exemplary when it comes to THE END, also the title of a theatre monologue adapted from his story of a dying man, that I saw Robert Menzies perform, very shrewdly, at Belvoir St Theatre in Sydney a few years ago. And then there’s Endgame, Krapp’s Last Tape, and myriad other endings in Beckett’s extraordinary work.

Recently I started watching yet-another-final-episode of the once-fantastic now-risible TV sci-fi show Doctor Who – you know the one, does the Doctor actually die this time? – in which the Doc pronounces that they’re ‘living in a reality bubble at the end of time itself’ and that they are at ‘the end of everything’ and so on relentlessly reciting ‘endings’ in a saccharine longueur. Fairly soon I found myself picking the iPad up from the couch and beginning to scroll through some other aimless thing.

Then I noticed an article on the recent Venice Biennale illustrated with Fabio Mauri’s painting of the final frame of a TV drama – ‘THE END’. During my time reading the poems I was also very conscious of and on the lookout for the wonderful lettering on ‘THE END’ in many cinema titles, especially in 1940’s film noir and cineuropa movies.

I remembered the graphics of the last frame of Loony Toons’ animations – ‘That’s all folks!’ Movie endings are endless. Alongside choosing the poems for this issue, I invited film critic Adrian Martin to contribute an essay. Then soon after his wonderful essay Last Concern arrived, I noticed that one of Adrian’s recent book titles is Last Day Every Day. Perfect.

Anyway, we’ve all been here before – there are millions of approaches to THE END. Wherever anything begins there is some kind of end and as Beckett wrote in Endgame, ‘The end is the beginning and yet you go on’. So it goes – on and on – so far …

The editorial zone is not always kind or fair in spite of our best intentions. I’m complicit in a couple of unfortunate aspects of it. I regret the constraint that meant only about 40 local poems of around 1000 could be chosen for publication. That comes down to the familiar and unjust paucity of literary funding. The other constraint was to read blind, so if anyone is feeling miffed for not having their poem in the issue I apologise – even though I have no idea who you are (the exception being two poets whose work I know and like who’ve told me that I sent their poems back). Enough of my waffling – as Ludwig Wittgenstein said ‘Explanations come to an end somewhere’. This is where.

I am pleased to present this particular ‘various field’ (thanks James Schuyler). Thanks to Cordite Poetry Review editor, Kent MacCarter, for the opportunity to do so, thanks to everyone who sent work in and may you, dear readers, enjoy the result …

This entry was posted in ESSAYS and tagged Pam Brown. Bookmark the permalink.

Pam Brown is a Sydney poet living on unceded Gadigal land. Her most recent book of poems is click here for what we do (Vagabond Press, 2018).

View all posts by Pam Brown on Cordite →