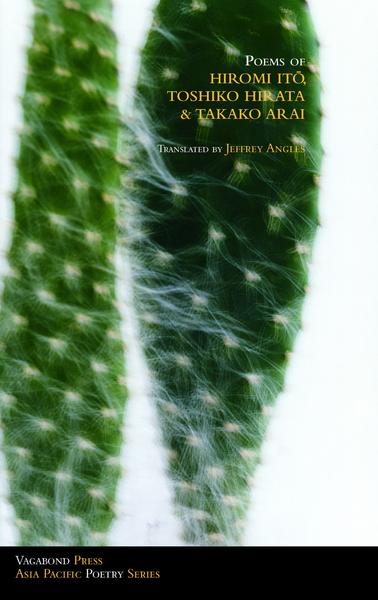 In the winter of Pokémon Go, I read quite a few new books of poetry. The collection Poems of Hiromi Itō, Toshiko Hirata & Takako Arai was the most cogent. These three Japanese poets are taboo-breaking women who write without reservation about ‘female experience’ in the political context of contemporary transnational capitalism.

There was a long tradition of separating literature from politics in Japan which fostered rarefied or, what translator Jeffrey Angles, in his invaluable introduction calls ‘staid, polished and artsy’ language. Eschewing tradition, Hiromi Itō, Toshiko Hirata and Takako Arai take a contemporary approach via dialectical sensitivity to the way poetry might sound and rhythmic direct speech. Sometimes this technique produces incantatory repetition, especially in Hiromi Itō’s shamanist poems.

Hiromi often addresses once-sensitive subjects like female eros, post-partum depression, sexual desire and inequity. Her poems are confronting. There’s a room of deformed and diseased body parts preserved in bottles in her poem from 1991, ‘Father’s Uterus, or the Map’ –

Hiromi Itō moved to California in the early1990s and now lives in both Encinitas, near San Diego, and Kumamoto, on the Southern Japanese island of Kyūshū. Some of her poems, like ‘Mother Dies’ examine expatriate identity, the future of children born to Japanese expats and the sense of not belonging in either country –

In ‘Yakisoba’ Hiromi recounts a confusing exchange in a supermarket with an old expatriate Japanese woman who shouts and yells out to promote the yakisoba (fried noodles) she is selling. The poem ends –

Toshiko Hirata, together with Hiromi Itō, Matsui Keiko, outsider poet Shiraishi Kazuko, and others, is well known in Japan as a major figure in what was called the ‘women’s poetry boom’ of the 1980s. (Though, apparently, Hiromi Itō was not too impressed by the ‘boom’).

Toshiko Hirata uses irony and repetition to make poems that are deeply sceptical of relationships, of the strictures of society, of the normative family, and of poetry itself. Many of her poems are quietly and darkly sardonic.

In a recently published collection, The Freedom of the Joke, Toshiko considered small objects like staples in intimate contrast with the immense force of the disastrous earthquakes, tsunami and aftershocks of 2011 –

Just two weeks after the disasters Toshiko published ‘Do Not Tremble’ in the daily newspaper Yomiuri Shinbum (The Japan Times) . It was a poetic plea to the earth to stop shaking so that everyone could return to their ordinary lives –

Eleven years younger than Hiromi and Toshiko, Takako Arai (born in 1966) is the daughter of a manager of a now-obsolete small traditional silk weaving factory in Central Japan. In early work Arai wrote about women textile workers. She moved to Tokyo for her education and lives there still.

Like Toshiko, Takako responds poetically to the ongoing consequences of the nuclear crisis. Her experimental and socially critical poetry uses repetition, direct speech, fragmentation and combined imagery. Her ironies are complicated. For instance, she uses euphemistic phrases like ‘womanly shadow’ for women’s genitals. (Jeffrey Angles’s extensive notes on the poems are essential to grasping the levels in all three poets work.)

Takako’s connection with the now redundant craft-textile industry remains a topic. In ‘Colored Glass’ a factory occupies a young woman’s body when she swallows a silkworm –

Recently, a friend of mine visiting Sydney from Adelaide, where there is no Uniqlo (yet), made a shopping excursion to the Japanese global clothing shop. I had just read Takako Arai’s poem railing against corporatisation and this particular company’s threat to individuality. (I am wearing a Uniqlo blouse as I write this review – and I am repentant). Uniqlo’s recent expansions are seen, by capitalists, as bringing economic hope to Japanese business in the aftermath of the 2011 disasters. Not so for Takako Arai –

As well as introducing new poems, this collection gathers work from various periods of publication by these dynamic women poets. It offers further complexity, exuberance, depth, variousness and challenge than I have canvassed in this brief review but my aim has been to give due attention to this startling and straightforward contemporary Japanese poetry.

This entry was posted in BOOK REVIEWS and tagged Hiromi Itō, Jeffrey Angles, Pam Brown, Takako Arai, Toshiko Hirata. Bookmark the permalink.
Pam Brown is a Sydney poet living on unceded Gadigal land. Her most recent book of poems is click here for what we do (Vagabond Press, 2018).