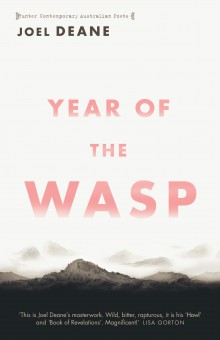 Year of the Wasp by Joel Dean
Hunter Publishers, 2016

As a literary work, Year of the Wasp reads as a volume of rare, terrifying beauty; beguiling as it guides the reader through an ordinary series of events in an ordinary series of settings. Reading Joel Deane’s third volume of poetry with the biographical insight that the author recently suffered a stroke provides additional complexity, and a kind of lucidity. The speaker leaves a light on for a reader cast out in the darkness of cognitive dissonance, body trauma, neurological confusion and existential crises. The rendering of these traumatic physical events, and Deane’s journey into reclaiming self through language, is also a mediation on mortality told in extraordinary poetics.

The first and titular part of three-part poem cycle might best be described as a contemporary take on the classical epic, where Greek myth, biblical imagery and suburban Australian converge. Deane moves from the mundane to the supermundane – or rather, from the real to surreal – and into the symbolic almost immediately. The shift is superb and fluid:

Cue barking ambos, the administering of drugs, a hallucinatory descent into an unheimlich underworld of dread. Animals and insects take the place of familiar objects and people: amongst the drilled in television sets are seagulls with ants for eyes; there is a Somali nurse tending to the patient, and an erection occurs. A wasp is in his head. The language is at once ghastly and surgically precise.

As Deane himself says, ‘[t]he art of becoming nothing is redaction.’ With metaphor, metonym, simile, poetry is a language that can communicate the shortfall between experience and intention, the chasm between reality and knowledge. It is a vehicle that gives voice to the gaps ‘in between,’ and can articulate the unspeakable. The irony of such a volume of poetry, grieving over the physical loss of language – a loss that overwhelms even the experience of impaired bodily function and physical suffering – is not lost on the poetic persona.

In The Year of the Wasp, words are symbols and ciphers in a desert of meaning. Words are referred to a blood ink, scrabble tiles and at one point, the spoken word is likened to a wasp performing a:

The second section marks a shift in tone and theme. ‘Eight Views of Nowhere’ moves from a stain on an east Kew studio floor to Fukishima, Godzilla, and origami vaginas quite seamlessly. Throughout the book, Deane’s poetics have a kind of Hemmingway-esque sense of economy and stridency. A sense of the masculine experience prevails, and in ‘Eight Views of Nowhere,’ the poetics remain razor sharp, but with delicacy. They read in part like haikus, in part like broken prayers:

Sex and death, destruction and the distance between lover and love object is crystallised in a closing love poem:

The third section, ‘Time’s Carrion Compass Course,’ invokes Ginsberg’s Howl. But this is distinctly Australian, moving from smaller cruelties, such as the hit and run and subsequent euthanasia of a vixen with a wheel jack, to larger: white Australian occupation, genocide, and more recent atrocities, such as Manus Island. This third part has a sense of desperate, brilliant kinesis, moving from the mythological and personal to the overtly political: a clear damnation of white Australia, conveyed through the clumsy euthanasia of the vixen. This death symbolically completes the poetic cycle: as an owl patrols the hospital ward in the Year of the Wasp, an eagle is watching. Someone, something – nature herself – is always watching and keeping score.

In the contemporary world – a world of drones, of drownings and indifferences – Deane keeps reaffirming ties to interconnection, returning to romantic love, and to filial love:

We live in dark times. As Deane says, it takes courage to be scared.

This entry was posted in BOOK REVIEWS and tagged Joel Deane, Ruth McIver. Bookmark the permalink.
Ruth McIver writes poetry and fiction. She’s written and launched a true crime inspired novel-in-verse, The Sunset Club which has been adapted for the stage and was commended in the Anne Elder category by FAW (2014). Ruth is now undertaking a PhD in the area of true crime inspired crime fiction at Curtin University.