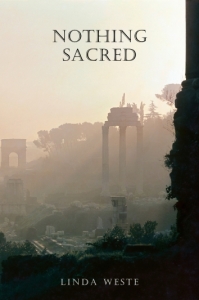 The novel-in-verse is an ideal medium for a work that is as much about place and story as it is voice – allowing the author to ventriloquise both the language of Rome’s ‘dung-smeared cobbles’ – and the machinations of the ruling elite. Streetscapes that are teeming with vice testify the Roman preoccupation with excess; the spectacle and sport of violence epitomised by the Circus Maximus. After reading Nothing Sacred, an insight is gained into the psychology behind the cruelty. And while there’s clearly an appetite for gratuitous violence, it seems almost beside the point. The Romans understood the poetry beneath the theatre and spectacle, the quest for glory and victory against insurmountable odds, irrespective of personal and public cost. Nothing Sacred channels this jubilation, lust and violence, creating a poetics of tragedy and defeat.

Quest for dominion, political intrigues, betrayals and coups are central to Nothing Sacred, but what really captures the reader is the more subtle interpersonal dynamics between characters. While this historical novel-in-verse focuses on the Pulchrii siblings, Clodius Pulcher and the infamous Clodia Metelli, the collection employs a multiplicity of perspectives. Latin terms are italicised and listed in the glossary, anchoring the contemporary reader to antiquity, engendering careful reading. Because changes in point of view are not annotated, readers have to work hard to locate themselves within the story, negotiating plot and identifying character by means of voice. Happily, voice works well to this end: largely distinct and strong characters emerge through Weste’s polyphonic flair. The combination of external and internal events, the shifting perspectives and Latin phrasing, all serve as cues to the reader to slow down, fully chew and digest the verse itself.

Purposefully crass and distinctly Aussie slang is peppered throughout the text and transmuted into poetic simile and metaphor. Cicero and his protégé are likened ‘an arse to underwear’. Other gems include ‘Jupiters balls!’ and ‘The lot can’t even piss straight.’ This practice of melding antiquity with contemporary wordplay and modern vernacular creates a kind of jocular intimacy with the present day reader. This playfulness with time and place seems to eschew conservative academic readings of antiquity and serves to make Nothing Sacred more accessible.

In contrast to the poet Catullus, Clodia, known as Lesbia in Catullus’s poems, is part Dorothy Parker and part Dorothy Porter; her voice is sharp and incisive as a blade. Clodia is, to use the modern vernacular, sex on a stick. But despite her desire being ‘straight,’ there’s a queerness to its expression. Clodia, the rumoured lover/love object of the Roman poet Catullus, is given poetic agency in her own right here. Her poems depict a sexually rapacious and ruthless quest for power and satisfaction of bodily desire. It’s clear from the other character’s perspectives that she embodies numerous ‘unfeminine qualities.’ For men like Cicero and Catullus, she both elicits and embodies a heady combination of lust and power. In ‘TREATMENT,’ Clodia describes acts of self-love:

Clodia’s identification with and love for the doomed brother Clodius is perhaps the most moving of all desires the text represents. Here, it is encapsulated by elegiac verse in ‘OPEN ALL HOURS (CLODIA’S POEM FOR CLODIUS)’:

Poem titles take on a heightened significant in novels-in-verse. Denoting place, signaling scene changes, as well as setting psychological tone, there is much onus on the title to execute fabula with fabulous economy. Some titles in Nothing Sacred are descriptive of scene or signal a change in poetic medium (many poems are epistolary), but ironic titles like ‘WORKING THE ROOM,’ ‘QUICK LEARNER,’ and ‘ASKING FOR IT’ are a nod-and-wink to the modern reader. They are a conveyance for the intermingling of antiquity and modernity in this text, as well as a tacit suggestion that the grand themes – victory, glory, desire – transcend time and place. Far from a ‘legacy of bone and ash’ these lines are but a waiting invitation to enter a living, breathing, gritty, dangerous and eternal Rome.

This entry was posted in BOOK REVIEWS and tagged Linda Weste, Ruth McIver. Bookmark the permalink.
Ruth McIver writes poetry and fiction. She’s written and launched a true crime inspired novel-in-verse, The Sunset Club which has been adapted for the stage and was commended in the Anne Elder category by FAW (2014). Ruth is now undertaking a PhD in the area of true crime inspired crime fiction at Curtin University.