Recording Archives: ‘A Way with Words’ 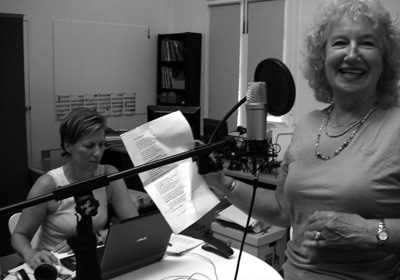 Six episodes of A Way with Words, featuring recordings of:


For two years, from September 2009 to October 2011, I produced a weekly radio program showcasing contemporary Australian poetry called A Way with Words. In all, 106 episodes (each of around five minutes) were produced. Presented here is a chance to listen in on six gems from the archives vault – some of my favourites, chosen for the most part because they are impossible to find elsewhere as audio.

A Way with Words was broadcast weekly by ArtSound in Canberra, picked up by Ozwrite on the National Community Radio Network, Dover Road Radio broadcasting from the Isle of Wright in the UK, 2KRRR Community Radio in Kandos and 3RRR in Melbourne.

Michael Sharkey with Carol Jenkins
Episode 34: ‘Ode to Shoes’ | (4:59)
[audio:http://cordite.org.au/audio/michael_sharkey.mp3|titles=Episode 34: ‘Ode to Shoes’ – Michael Sharkey and Carol Jenkins]
This poem by Michael Sharkey was written in response to a collection of poems about clothes I was putting together for River Road Press. In it, he corners the market in footwear as it fairly belts along, a complete tour de shoe. The poem is anthologised is The Philosophy of Clothes, and is collected in Another Fine Morning in Paradise (Five Islands Press, 2012).

The genesis of the program happened at an ‘Afternoon of Poetry’ in July 2009 hosted by the National Library of Australia. This event bought together poets Judith Beveridge, Peter Boyle, Stephen Edgar, Susan Hampton, Martin Langford, David Musgrave, Geoff Page, Mark Tredinnick and Vivian Smith. It was something of a coup to gather all these fine poets in one place as well the first public reading by Vivian Smith for many years. All the poets had audio collections in the River Road Poetry Series or were well represented in our anthologies. The National Library – particularly Candice Cappe, then Manager of the NLA Bookshop and Paul Hetherington – were welcome supporters of River Road Press and audio poetry. I was there as emcee, publisher of River Road Press and poet.

Lauren Black, then Manager of ArtSound FM in Canberra, was also there and felt the poems and their introductions would be perfect as a poetry segment for ArtSound. The first episode of A Way with Words, featuring Judith Beveridge’s poem ‘How to Love Bats,’ went to air on Saturday 5 September 2009 as part of ArtSound’s Meridian program.

The aim of the program was to quickly set up a poem, provide listeners an easy way in, occasionally offer tips for things to look out for, give some background information with a dash of biography and enough information to find more work by the poet. Then, the poem. The whole thing was book-ended by an intro and outro, in seven minutes or less. If poems were strangers you might be reluctant to meet, this radio introduction would predispose you to them. If you were already keen on poetry, you could meet up with some old friends and find new ones. It was a discrete dose of literature without literariness.

Pages: 1 2
This entry was posted in ESSAYS and tagged Carol Jenkins, Christine Paice, David Mortimer, John Watson, Julie Chevalier, Kerry Leves, Michael Sharkey. Bookmark the permalink.
Carol Jenkins is an Australian writer and publisher. She lives with her family in Sydney, near Balmoral Beach. Coming to poetry from a career in chemical regulation, her first poem was published in 2004. She has two collections of poetry, Fishing in the Devonian (2008) and Xn, 2013 both from Puncher & Wattmann. Her most recent book and silliest book is Select Episodes from the Mr Farmhand Series, from Puncher & Wattmann, is available in print and as an ebook. In 2016 she was a judge for the Newcastle Poetry Prize and a guest poet at the International Festival de la Poesie in Quebec. Her poems have been translated into Spanish, Chinese, Russian and French. In 2007, she launched River Road Press, which has recorded and published 21 audio CDs of Australian poets.