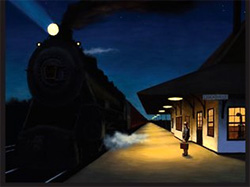 While a long-time voracious song-writer and performer in his own right, Australian musician Paul Kelly has also been a collaborative nomad, drawn to criss-cross with others during his career. And Kelly’s collaboration most likely to grip poets is also his most recent – Conversations with Ghosts – an ambitious song-cycle of twelve haunting poetic texts.

First performed in 2012 and reprised live this September with concerts in three states, Conversations with Ghosts began in 2010 when the South Melbourne-based Australian National Academy of Music (ANAM) proposed to Kelly that he collaborate with the school on a modern classical song cycle. In the CD liner notes, his co-composer and conductor James Ledger (then resident at ANAM) recalls two of the works – the musical re-imagining of W.B. Yeats’ poem, ‘The Lake Isle of Innisfree’ and Kelly’s own lyric, ‘The Chimes at Midnight’ – came as a quick birth, in a couple of hours, Ledger at the piano, Kelly singing alongside.

Live, the Melbourne Recital Centre performance I saw in October last year felt like a grand strike for poetry, with the centrepiece, Kenneth Slessor’s mighty ‘Five Bells’, sombrely and conversationally rolled out by Kelly, whose poetic memory through a long night of mostly spoken, part-sung word was notable.

That such a wild and sustained poem – Slessor’s mourning of his mate’s drowning – should be re-imagined within a modern classical and slightly rock setting is something to celebrate.

And ‘Five Bells’, given this kiss of life, still seems so quintessentially Australian, and, of its time (1930s), bohemian:

The sounds of ANAM’s young post-graduate ensemble vaunted high and crisp into the ribs of the Elizabeth Murdoch Hall in the Melbourne Recital Centre, in complex classical arrangements for the likes of Emily Dickinson’s ‘One Need Not Be a Chamber To Be Haunted’, Scottish poet Norman MacCaig’s ‘Basking Shark’, and more from Australia’s canon with Les Murray’s ‘Once in a Lifetime, Snow’ and Judith Wright’s ‘Woman to Man’.

The other-worldly, apocalyptic and cryptic Yeats is given a second jolt to the heart with a sophisticated orchestration for his ‘Sailing to Byzantium’, whose opening sally, ‘That is no country for old men’ is familiar to many, not least as inspiration for the title of the Oscar-winning film of 2007, directed by the Coen brothers. The ongoing melancholic – and salutary – ringing of bells in Conversations with Ghosts continues with ‘Ring Out, Wild Bells’ (from ‘In Memoriam A.H.H.’) by Tennyson:

Viola and harp work were highlights live, and violins, keyboards, double bass, clarinet, saxophones, French and other horns, percussion and frequent lead lines from the variegated recorders of soloist Genevieve Lacey unfolded compositions, by turns, experimental and occasionally (although not uncomfortably) traditional, with the Celtic tang often expected from Kelly. Ledger’s work with the baton brought the disparate elements together with authority.

The performances of ANAM’s players, among the best post-graduate musicians in the country, and Kelly’s casual, yet spine-tingling narrations – his brassy voice often soaring above the ensemble like a cornet – are sharply arranged and recorded on disc. Lacey’s recorder takes a rather clichéd ‘ghostly’ approach in the overture ‘The Lake Isle of Innisfree’, but this could have been a rare failing in arrangement. Kelly’s ‘captain’s pick’ of most of the poetry, his occasional acoustic guitar and his own four lyrical contributions set an unpretentious tone, while Ledger’s complexities of orchestration, including dissonant passages, were strongly played by the young virtuosos.

The closest thing, for Kelly fans, to this collaboration would be the filmic light opera One Night the Moon (2001, directed by Rachel Perkins) where the more than worthy soundtrack was co-written by Kelly, Kev Carmody and Mairead Hannan; while his crackling, part-improvised (with Professor Ratbaggy) soundtrack to Lantana (Ray Lawrence – also 2001) is another genre-stretching and unsettling long-player. Conversations with Ghosts stands well alongside these two as yet another powerful Paul Kelly collaboration.

Disclaimer: Jen Jewel Brown is is an ex-sister-in-law of Paul Kelly.

This entry was posted in ESSAYS and tagged Jen Jewel Brown. Bookmark the permalink.
Jen Jewel Brown works for the National Film & Sound Archive and is doing a Ph.D. at Monash. She is an award-winning poet, twice featured in Best Australian Poems (Black Inc.). Brown has worked as a journalist and reviewer since the 70s and authored four books.