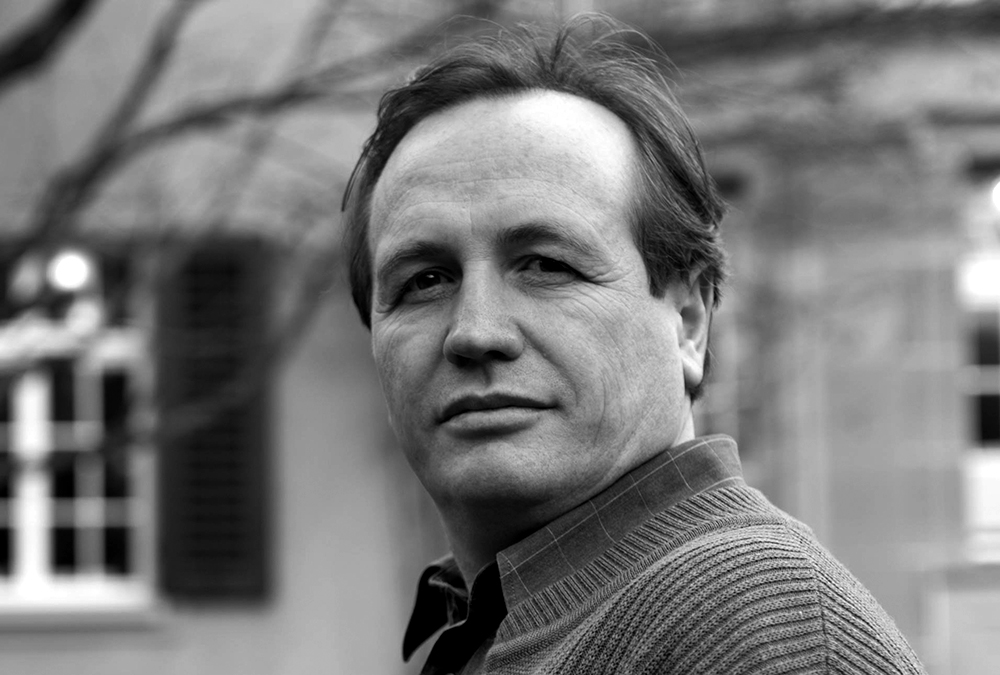 The following four poems have been selected from two volumes of poetry: Rătăcirile Doamnei Bovary [Madame Bovary’s Wanderings] and Cât de departe am mers [How Far We’ve Gone], published in 1996 and 2008 respectively. Vasile Baghiu coined the term ‘chimerism’ – a cross between bovarysme and literature – which he defined as a kind of escapism; the creation of a parallel universe or counter-reality through which to escape the everyday struggles of 1980s Communist Romania. Four elements are intrinsic to the concept of chimerism: ‘imaginary journey’, as a means of evading the socio-political constraints and the cultural provincialism of the time; ‘disease’, as a reality devoid of superficiality and flippancy; ‘transfiguration’, as a way of creating new experiences; and ‘science’, as poetic adventure in a space that has rarely been explored through poetic means. The driving force and key inspiration behind chimerism, as Baghiu himself confessed when I interviewed him in 2017, was Thomas Mann’s bildungsroman The Magic Mountain, along with poems depicting sickness and human suffering, which Baghiu read throughout his teenage years.

Baghiu’s poetry is dominated by a reality-memory dichotomy. Its uniqueness resides in the fusion of imagery, self-discovery, escapism, and a sense of freedom. The verse is crisp, clean and economical, thus making the process of translation similar to cutting, shaping and polishing a diamond. What struck me more than anything was the visual element that dominates most of Baghiu’s poems; after reading volume after volume, I was left with the distinct impression of a painting waiting to be discovered and understood. While sound and rhythm are also present, I felt that the true meaning was hidden in the visual imagery, and as a translator I focused on capturing both the visual elements and the meaning behind them, and on delivering poems that preserve the freshness and authenticity of the originals.

Another key element was the translation of certain Romanian words and names. For example, I pondered over the translation of poezia [poetry] in the poem ‘As it happened’, because I was looking for a way to keep some of the original flavour in the translation. So, I settled for the archaic, poetic English word Poesy, which is closer in sound to the Romanian word and adds an element of musicality to the imagery. Turning a common noun, poezia, into a proper noun, Poesy, was a deliberate choice, as I felt that Poesy itself played a key role in the story.

I applied similar considerations around maintaining authenticity to the translation of foreign names, such as that of Nicolae Bălcescu (including its original spelling with diacritical marks) in the poem ‘Those were tumultuous times’, to give the Australian reader a taste of Romanian culture. I felt there was no need for added explanations or references about Nicolae Bălcescu himself (he was, for the record, an important political and intellectual figure and leader of the 1848 Wallachian revolution) because for me, the message of this particular poem – estrangement, memories and regret – was sufficient to convey its Romanianness.

Pages: 1 2 3 4 5
This entry was posted in TRANSLATIONS and tagged Cristina Savin, Vasile Baghiu. Bookmark the permalink.
Cristina Savin is a freelance translator based in Melbourne, Australia. She is the French-to-English translator of Marie Lion and philosopher Marcel Gauchet. Her translations from Romanian have been published in Cordite Poetry Review, The AALITRA Review and Bordertown. Cristina is an assistant editor at The AALITRA Review and is currently undertaking a PhD in Translation Studies at Monash University.


More by Cristina Savin on Cordite Poetry Review →
Vasile Baghiu is the author of seven collections of poems, including The Taste of Alienation, The Manner, The Sanatorium’s Ghost and Depression. He has also published a collection of short stories—Departure Point—and three novels: The Hospice, Plans in Life and Happiness under Limits. He was awarded the Aurel Dumitraşcu Prize and the Prize of the Romanian Union of Writers, and is known for coining the poetic concept of 'chimerism'.