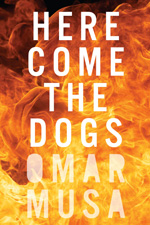 Primarily known as a performance poet and rapper, Omar Musa has embarked on another textual form with his latest publication, Here Come the Dogs. Written in a combination of verse and prose, Here Comes the Dogs offers an intimate portrait of three young men negotiating issues of identity and marginalisation in an unnamed Australian city. Musa, who is Malaysian-Australian, positions his poetry and prose in a manner that allows for his book to confront themes surrounding cultural and ethnic identities, intersectional discrimination and problematic expressions of masculinity and power.

Here Come the Dogs begins with the perspective of Solomon as he impatiently waits for his closet friend, Aleks, and his half-brother, Jimmy, to meet him at the greyhound races. Conflict between ethnicity and nationality are directly introduced as the reader follows Solomon’s internal dialogue. Upon seeing Aleks and Jimmy emerge from the crowd Solomon observes:

By introducing the trio in this way, Musa positions their ethnicity as a predominant factor in their negotiations of identity. Yet this emphasis on ethnicity also allows for Musa to play with and expose the limitations and problems that an essentialist understanding of ethnicity has for contemporary Australia. During one scene Aleks, who is Macedonian, goes to meet Solomon and finds him in the street ‘telling a story to two Tongan blokes’ (41), after which Aleks asks himself: ‘Aren’t Samoans and Tongans supposed to hate each other? ’ (41-42). Musa continually challenges the prejudices that prowl beneath these sequences of thought.

One of the primary ways in which Musa confronts preconceived ideas of ethnicity is by refusing to define the background of the character Jimmy. Although it’s established that Jimmy is Solomon’s ‘half-brother’ (8), Jimmy’s ethnicity remains unspecified. At one point a character gazes at Jimmy, ‘obviously trying to figure out what he is’ (49). This is a startling line, highlighting the harmful impact caused by people accustomed to categorisation. Musa delves into the consequences of such prejudices as Jimmy stumbles into a world of increasing hallucinations and a burning madness.

All three characters reclaim an expression of themselves through their love and dedication to hip-hop music and graffiti art. Musa’s recurrent hip-hop references read, at some points, a little contrived and instructive, however the characters dialogue may also act as a type of literary archive for the social history of Australian hip-hop artists:

Musa often has his characters discuss hip-hop aesthetic in great detail, listing the names of actual artists that they admire. His attention to hip-hop culture demonstrates the ways in which we may construct our cultural identities and uphold these through our use of slang. Musa’s celebration of colloquial speech and expletives demonstrate the intricacies of multilingualism and how our social and cultural background informs the language we use. Jimmy observes that:

Alecks has a hotchpotch vernacular, pieced together out of rap music, woggy slang, movies and Aussie colloquialisms, but Jimmy’s favourite is when he uses old-fashioned expressions, something you might hear a grandma saying – ‘dearo me’ or ‘goodness gracious’. (94).

Although the majority of the text is written in prose, Musa’s combination of verse and prose allows his text to demonstrate the tension his characters experience with their ethnic, national and gender identities. While the prose sections assist in detailing the narrative, Musa’s concise lines of free verse allow the text to enact the anxiety and fragmentation felt by his characters. The unease Solomon feels between his ethnicity and his nationality are considered while he plays his beloved sport, basketball:

Changing between verse and prose also allows for a textual diversity and a rejection of purity, challenging the reader’s expectation of a consistency in form. The change between verse and prose may be subtle and occur in between paragraphs, or it may be blatantly obvious, as Musa shifts between his character’s realities and their fantasies and dreams.

Musa’s characters often commit aggressive and even violent acts to maintain a level of hegemonic masculinity and power. Jimmy expresses his feeling of inadequacy because he’s ‘no good with his fists’ (20) and desires to be tougher, ‘wishes he were Solomon or Aleks’ (50). The book eventually addresses these issues by exposing the unstable elements of these gender roles. The character of Scarlet, Solomon’s lover, challenges his masculinity and acknowledges the absence of women in the text when she asks: ‘“Do you have any female friends?’” (181). The objectification of women to is also highlighted by Musa as Jimmy becomes obsessed with a woman called Hailee, believing that: ‘Maybe if he got a hot girlfriend, it’d prove to everyone that he’s not a shit cunt’ (48). His behaviour becomes increasingly dangerous in a quest to possess Hailee. The complexities and flaws in each of Musa’s protagonists are exposed to depict problems of cultural and social expectations of masculinity.

Just as he does with lyrics, Musa ensures that Here Come the Dogs is a site of political resistance, calling for social justice and an acceptance of cultural diversity. In addition to themes surrounding culture and ethnicity, this book is fearless in its consideration of the historical and continuing mistreatment of Indigenous Australians, environmental degradation, domestic violence and the unethical treatment of asylum seekers. Here Come the Dogs is unsettling, unapologetic and intends to be confrontational.

This entry was posted in BOOK REVIEWS and tagged Autumn Royal. Bookmark the permalink.
Autumn Royal is a poet, researcher and teacher based in Narrm/Melbourne. Her current research examines elegiac expression in contemporary poetry. She is interviews editor for Cordite Poetry Review, editor of Liquid Architecture’s Disclaimer journal, and author of the poetry collection She Woke & Rose. Her second collection of poetry is forthcoming with Giramondo Publishing.