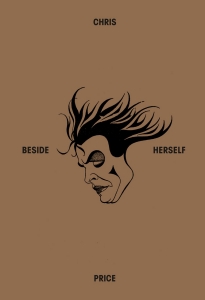 Beside Herself by Chris Price
Auckland University Press, 2016

‘Beside’, for starters, is a clever position for Price to situate her writing and the speakers in this collection. The ‘performance’ carried out by these multiple speakers occurs in varying densities of poetic language. Theatricality is created by a play between subversion of, and adherence to conventions; and between Price’s writing and carefully selected illustrations by Leo Bensemann (including the cover and frontispiece, ‘Mask’). Additionally, Bensemann’s illustrations link to other literary texts, including a reference to Wallace Stevens in the title of the illustrations, Fantastica: Thirteen Drawings. They are used as a resonant structural device: as well as the immediate content of Price’s text, conversations develop between the sections of Beside Herself and Bensemann’s images.

This effect allows Price’s otherwise eclectic poems to form a coherent collection of representation and otherness within oneself. Furthermore, the way she has used Bensemann’s illustrations shows she has not approached the concept of performance glibly. Actually, Price doesn’t do or say anything glibly. The opening quotes reflect her attempt to express the multitude of selves one performs (and is performed by) in language. For instance, Price quotes Frederick Seidel’s ‘Prayer’: ‘But we are someone else. We’re born that way.’ Certainly, our otherness occurs when we enter language, but in this collection Price addresses how we are performed in language, why some selves float to the top and not others.

Resplendent with references and imagery to epitomise these ideas of otherness, ‘Abandoned Hamlet’ is hidden away, like the id, in the midst of the book’s first section. Here the question is asked, via the Russian ending of Hamlet (‘The rest is silence’): how are left with ourselves? The following poem, ‘A natural history of Richard’ continues references to Hamlet. It plays on a Tarlton jest-like Hamlet talking to Yorick’s skull, whose bones seem to be exhumed from a winter of discontent, ‘ready to talk’ before ending with, ‘Read the script.’

One aspect of the poems’ form that I particularly enjoyed, is Price’s use of square brackets in the title poem. [The shift from third person in the collection’s title, to second person in the poem’s title, shows the shift from outside the collection to inside it]. The opening line is an imperative: ‘Step sideways’; and the next section [after the first set of square brackets facing the text but positioned where an asterisk would otherwise be] commands, ‘Step aside’. Such play is not enjoyed at the price of craft. It would be easy to overdo the aside [as I already have done] but Price gets us onside with strictly disciplined wordplay, only giving enough to add, not detract, from the work. And if you think about the purpose of square brackets [added information from another writer or speaker to clarify] then what we have here, are other speakers clarifying the ‘original’ speaker. As ‘Abandoned Hamlet’ says, ‘I / am every character — / every, every character.’

Surely this latter and somewhat sore point of craft is alluded to by ‘The New Cuisine’. Its opening line, ‘But excellence had left the old recipes’, points to those fad-poets who have ‘con[ned] the locals / with the pallid mash … / in fancy language.’ Price may be playing with language but she is clearly positioning her writing within the craft of a tradition, ‘What all of us once knew / was hoarded in the snowy alpine province / of the few.’ Nevertheless, Price complicates the poet-as-self-identity, and acknowledging these selves as many in the one.

Poetry is seldom confessional, for how is language truth? Price knows language is a construction, but she still manages a persona who does intimately share itself without offending the reader’s sensibilities. There is a day in the life of a Price persona, in ‘Tango with mute button’, where a dance lesson is narrated from a stationary bike at a mundane gym. The scene becomes an extended metaphor for that V S Naipaul-esque, half-lived quandary of where the grass is greener. The brilliant and subtle humour continues in ‘My friend Flicka’, which takes the standard rite-of-passage known to any young girl who has loved horses, and merges into a more serious turn towards those close and intimate relationships that take work, yet work. In the latter part of this poem, the horse has become a human partner, who asks a seemingly harmless question – about what the word ‘trope’ means. What follows is the humorous response of a wordsmith, and a creative writing teacher: ‘tripwire and rope’.

Pages: 1 2 3
This entry was posted in BOOK REVIEWS and tagged Chris Price, Hera Lindsay Bird, Kelly Malone. Bookmark the permalink.
Kelly Malone is a poet and language artist. Her poetry and ‘artwords’ have been published locally and internationally in various places including Brief, The Capilano Review, Deep South, fillingStation, Shearsman Magazine, Snorkel, Swamp, Turbine. Her ‘chapbox’ features in a recent Tinfish publication edited by Lisa Samuels, Over Hear: Six Types of Poetry Experiment in Aotearoa / New Zealand. Curation of her performance work ‘Nee Miss’ has been archived online at NZEPC. Another performance work, ‘Reign of Contexti: A Libretto’ was shortlisted for the biennial Leslie Scalapino Award for Innovation Women Performance Writers, 2016. Kelly is a PhD Candidate at University of Newcastle, researching the emerging field of Performance Writing in Australia and New Zealand.