In Black and White: Pictures from the Camera Obscura 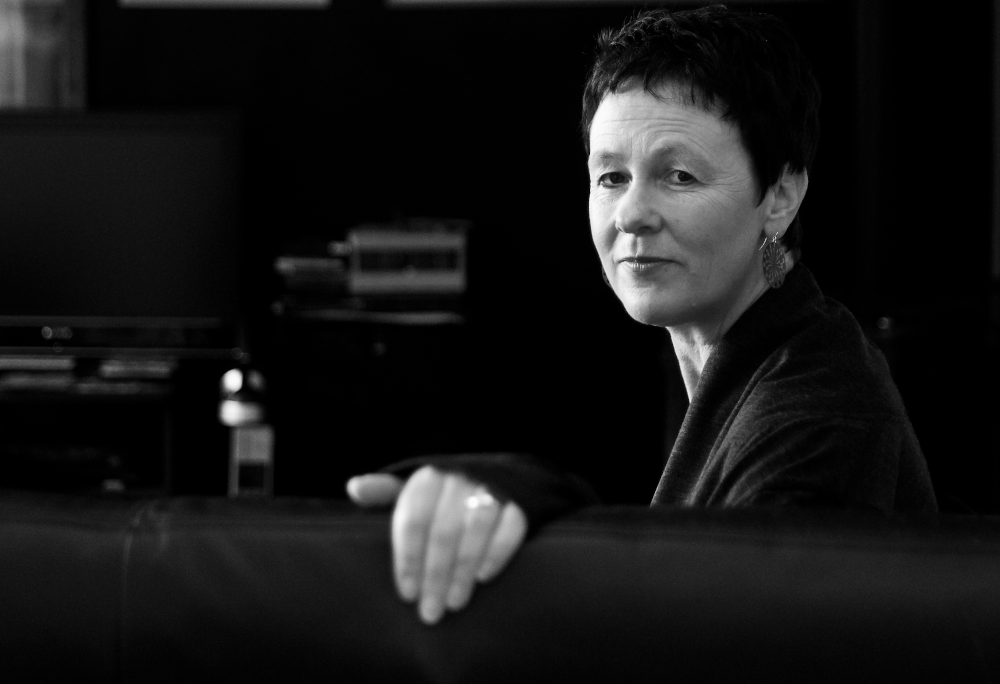 I’ve been trying to train myself out of black. It’s not going well – on the rack my eye still heads that way every time. I know in theory that some colour would suit me better but I seem to be shut in the dark. Summer or winter, happy or sad, black is the new black, and the old black too.

*
I trace my preference for black and white photography to a teenage leaning towards the spare, riddling aesthetic of Zen (not excluding the black robes of the monks and meditation cushions). For a time this fascination extended further east via a large-format edition of the Tao Te Ching that combined original calligraphy with black and white photos of natural forms – shells, trees, waves, birds, pines, grasses, hilltops, snow, and the occasional building isolated in a landscape or against a sky. English translation on the facing page. The one human body in the book was cropped so severely that it resembled a hillside. It struck me even then that this hushed world looked a lot better without us in it. It looked like a place where a human being, if she ever did show up, might find encouragement to be her better self.

*
Perhaps my misanthropic streak was forming even then. Individual humans were fine but, taken as a collective, there were an awful lot of worst selves to overlook. Perhaps these atmospheric landscapes were a way of dodging them. These days I can see the point of joining the Voluntary Human Extinction Club, while also feeling that its counter-reproductive strategy may itself be counterproductive. Aren’t those of us who have the terrible luxury of wishing for the extinction of our own species precisely the ones who should be combatting all the other looming extinctions?

*
I’ve been trying to wean myself, equally unsuccessfully, off black and white prints. To defend this preference, I might say they leave more room for the imagination. As a film is to its novel, so the colour photograph is to black and white: it fixes a person too firmly in the sunlit world, rather than bringing them half-way out of the mind’s dark-room. In colour, the developing seems already complete. Let me dive instead into high contrast black and white, into glimmering silvers and greys.

The black and white photograph suggests a story, the colour photo tells it. Poem vs. short fiction. Or essay.

*
I know I must seem old because I can recall watching black and white TV. (You can see this by the grey I’m still hiding.) Its online afterglow reminds me that memory too once lived in black and white; still pictures rested in albums on heavy black paper, slipped into four translucent corners. Then they were Kodachrome, Instamatic, Leica, gone.

*
The Black and White Minstrels Show was a peculiarly English relic of the previous century’s American blackface minstrelsy, made in a world even the lower classes still thought they owned and did not need to understand. Relic of empire’s cabinet of curiosities, its grasping and tenacious Latin taxonomy. Britannia rule the waves, the beaches, rivers, forests and mountains too, all the animal vegetable mineral God-given dominions. Lay your grasping hand on the world. I was airfreighted here as a small child and have lived ever since on streets that overwrote the existing poetry of place with the names of Romantic poets and undistinguished colonial officials. But it has taken decades for my imagination to begin its descent, much less come in to land. For a long time I have lived mid-air, among the clouds, in greyscale.

*
In black and white photography, everyone wears a veil. The allure of silver gelatine. Albumen. Tintype. Photogram. Calotype. The original filters.

*
The grainy glow of historical footage fooled us into overrating our futurity. History as taught here had mostly happened elsewhere, and we thought we had left that glow behind. The Russian Revolution, Alexanderplatz, Nuremberg, Churchill. MLK, JFK, the Cold War, J Edgar Hoover, Angela Davis, then the ‘end of history’. So twentieth century. But the fade was a temporary amnesia, for the black and white of history is back, proving the illusion of progress and the stubborn persistence of division. Misanthropy kindles when what’s most needed is its opposite. Does every history lesson last no more than a generation and a half before it fades into the vanishing point of a switched off tube TV, the flatscreen collapse of a galaxy? Do you remember that show called This Is Your Life?

*
Many of us are still living on empire’s ill-gotten gains and through its fallout. In the Pacific, a temporary concrete coffin built to contain waste from last century’s nuclear testing is beginning to leak. In Aotearoa, thousands of tonnes of aluminium dross left behind in a river town when the company charged with removing it went into liquidation will create a huge cloud of ammonia if (when) floods reach the old factory where it is stored. Nuclear age and extractive industry, meet climate change. Those who left the mess look away.

*
The Tao Te Ching is a work that, among other things, addresses the exercise of power.

*
It’s there in black and white. Meaning, what’s set in type is true. The opposite of mysterious, plain as the nose on your face. Meaning, are you a fool? Meaning, it’s obvious, or you were told. Meaning, didn’t you read the fine print? Water is soft, it eludes fixity.

*
Historians are the epidemiologists of bad ideas, which may seem like outdated diseases until they find their moment to return. A healthy scepticism may turn to distrust of what’s there in black and white, a lesson taught by fraudsters and merchants of doubt, evidence no more trusted now than spin. Is this the post-postmodern, or just the next stop on the slippery slope? When everything is true, and nothing is. How the simple lie turns out to be the most effective. World vanishes into fog. The fox leaves tracks and is not caught.

Pages: 1 2 3 4
This entry was posted in ESSAYS and tagged Chris Price, Grace Paley, Jenny Diski, Wayne Koestenbaum. Bookmark the permalink.
Chris Price is the author of three poetry collections, most recently Beside Herself (Auckland University Press 2016), and the mixed-genre ‘biographical dictionary’, Brief Lives. With Stephanie Burt and Paul Millar she co-edited the 2018 Aotearoa/New Zealand issue of POETRY. She convenes the poetry and creative nonfiction MA workshop at the International Institute of Modern Letters, Wellington University, New Zealand, where she co-edited (with Emily Perkins) The Fuse Box, a book of essays on writing (Victoria University Press, 2016). The Lobster’s Tail, a ‘picture book for adults’ in collaboration with photographer Bruce Foster, is forthcoming from Massey University Press in 2021.