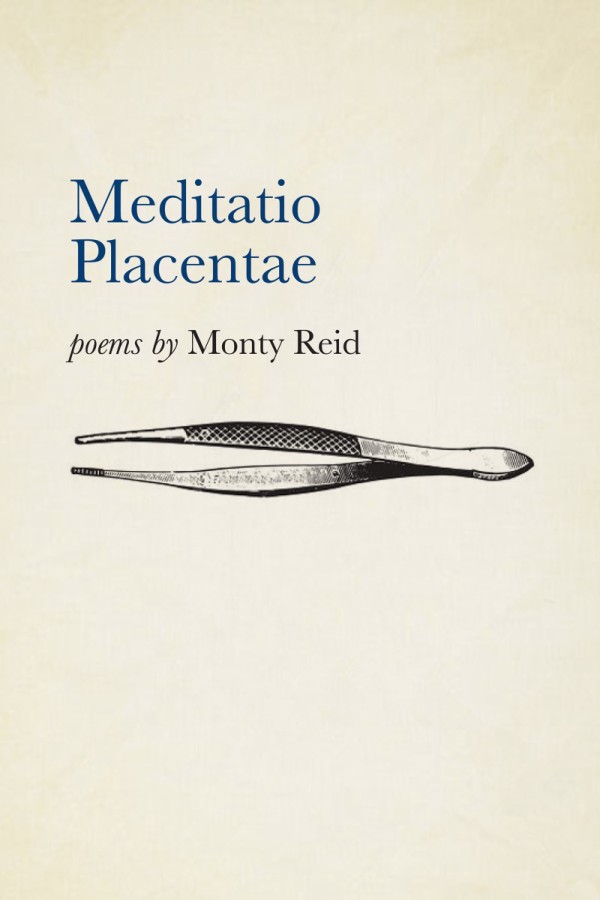 Composed of nine distinct sections, Canadian poet Monty Reid’s Meditatio Placentae is more like a collection of chapbooks than individual poems. Most of those nine sections have previously appeared as separate publications, and each certainly works as a discrete sequence. The whole is loosely held together by a combination of mundane subjects and a nightmare-like, alien perceptiveness; rather than building a continuous collection, the sections create a context of transition from one mode to another.

The book begins with quite domestic, workaday situations in sections like ‘Household Gods’, ‘Frances Disassembles the Pop-up Book’ and ‘Site Conditions’, before moving to character- or mood-driven stories of varying narrative opacity. Opening with poems like ‘Sock’, ‘Lint’, ‘Kleenex’ and ‘Tweezers’, the ‘Household Gods’ sequence dangerously emulates the mundanity of its subjects, with a cautiously literal treatment of each ‘god’:

An industrious reader could potentially mine pieces like this for parallels to the disillusionment of domestic relationships, particularly implied husband-wife conventions, but they don’t necessarily give us much that is new to thrill at. The sequence would have offered more longevity if it demanded more of the reader; excision of the individual titles, for example, may have made for some challenging but accessible puzzles. The sequence gathers strength though, chiefly through several modest but delightful metaphors, and the occasional permeation of the ongoing literal description with hints of narrative, as in pieces like ‘Button’:

The best moments in ‘Household Gods’ are concise, near-Steinian quips that expose the absurd in the real, for example the first two lines of ‘Chair’: ‘The chair is what’s left after you sit in one place / long enough’; but, much like that final line of ‘Button’, ‘Chair’ also carries on beyond its most impactful point, still reasonably strong but at risk of losing density and focus:

‘Site Conditions’ follows a similar mode to ‘Household Gods’, identifying individual subjects from the specified environment and undertaking a field-trip character study. At times too thoroughly spelled out to offer anything but affirmation of the known, poems like ‘Bobcat’, ‘Cement’ or ‘Torch’ could again benefit from greater obfuscation:

At first read it seems there’s one too many degrees of information; without the individual titles, or without the sequence title, there’d be greater longevity perhaps. But that title, ‘Site Conditions’, also invites awareness of the author’s own mindfulness of materiality, process, craft and component pieces: the sequence builds through subtle humour and a recognisable but not over-familiar labourer’s perspective on the building site, especially with later pieces like ‘Chop Saw’, ‘Cable’, and ‘Architect’:

The poem is delightful for the wry way it captures a classist disconnect between the people responsible for manual actuation of a plan and those handing it down. Additionally, the introduction of the architects midway through what had been a sequence of tools and materials also opens the reading of the poem to interesting new considerations – about where one might draw a line between implement and implement user, or the fundamental value of functionality (or even usefulness) over less tangible qualities like intellect, knowledge, ideas. ‘What room is there for poesis in a building site?’ it seems to ask, while simultaneously demonstrating the answer: that a construction site is entirely contained by somebody’s poesis, somewhere.

And from that point, further possibilities arise: the inclusion of the less ‘objective’ term, ‘dreams’,  in ‘Insulation’ – ‘The cold stays out / the dreams stay in’ – raises the disconnect between our daily lives (and lifetimes) and the natural world, hinting at the unsustainably Cinderella idyll of owning your own home to be happy ever after. In that context, ‘Drywall’ offers another of the book’s best moments, teetering between philosophical contemplation of the facade of materialist society and a rueful worker’s wisdom:

‘Flatbed’ takes that last element as its own, recalling work like William Letford’s ‘Thurs hunnurs a burds oan the roofs’ and Dennis McIntosh’s ‘Relationships’, with its ear for the voice and its eye for the point of focus in recurring workplace moments:

More than anything, ‘Site Conditions’ effectively captures the odd groove of mindfulness and meditation that can arise in an individual spending hours at a time, dutifully completing specific but ‘mindless’ (or perhaps mind-free) manual tasks.

Moving on from these initial domestic and workplace observations, the collection migrates across a number of increasingly odd, self-sustained voice-spaces – ‘Lost in the Owl Woods’, ‘Meditatio Placentae’, ‘So is the Madness of Humans’ – that make, undo and remake single moments or notions.

The title sequence offers a startling take on that modus operandi. Another sequence of diffracted perspectives on a specific subject, ‘Meditatio Placentae’ is a creepy series of first-person meditations narrated by a placenta, born with ‘just as much necessity but none / of the adoration’, who refers to the about-to-be-born child as ‘the carry-on full of small bones / articulated as an I’. Sometimes funny, this piece is bleak and disorienting, heartfully exploring the weariness of isolation, how unrelenting it can be to have no place in the world. ‘Whatever it is that remembers, can stop now,’ says the human flesh being born, knowing that to be born is to cease to be alive. During an account of being forgotten in a freezer and belatedly buried, this impossible fiction evokes a powerful emotional pain and alienation, which is then driven home with the heartbreaking lines: ‘I never wanted to know / and never expected to be human’.

Notions of ‘to be human’, authenticity, purpose and identity recur and reform throughout this book. ‘Contributors Notes’ (the final sequence, of course) turns those lenses on the literary community, as writers, readers and self-promoters. Accessible and engaging, funny without being goofy (maybe just a little), these pieces do many of the things the book as a whole is trying to do. They delve into a cubistic fragmentation of the same moment or topic as many facets, many of which don’t quite agree with the others; they imply the potential for different voices, yet across the sequence, they maintain a coherent character; and they prompt the reader to expect, and think about, more than the surface, without necessarily giving anything specific to hold onto beyond the superficial. In particular, the ‘Contributors’ Notes’ pick at the habits of small press authors and small (closed) literary circles’. For example:

Monty Reid wasn’t always this way. He used to browse through each new issue, reading what caught his eye, going back to reread pieces, often reading through the entire contents. Now, sadly, he never gets past the contributors’ notes.

Pages: 1 2
This entry was posted in BOOK REVIEWS and tagged Michael Aiken, Monty Reid. Bookmark the permalink.
Michael Aiken is a writer living and working in Sydney. His first collection, A Vicious Example (Grand Parade Poets 2014), was shortlisted for the NSW Premier's Kenneth Slessor Prize and the Mary Gilmore Prize, and the cover design by Chris Edwards was also shortlisted for the Australian Book Design Awards. In 2016, he was the recipient of the Australian Book Review's inaugural Laureate's Fellowship, for which he wrote the book-length poem 'Satan Repentant' under the mentorship of David Malouf.