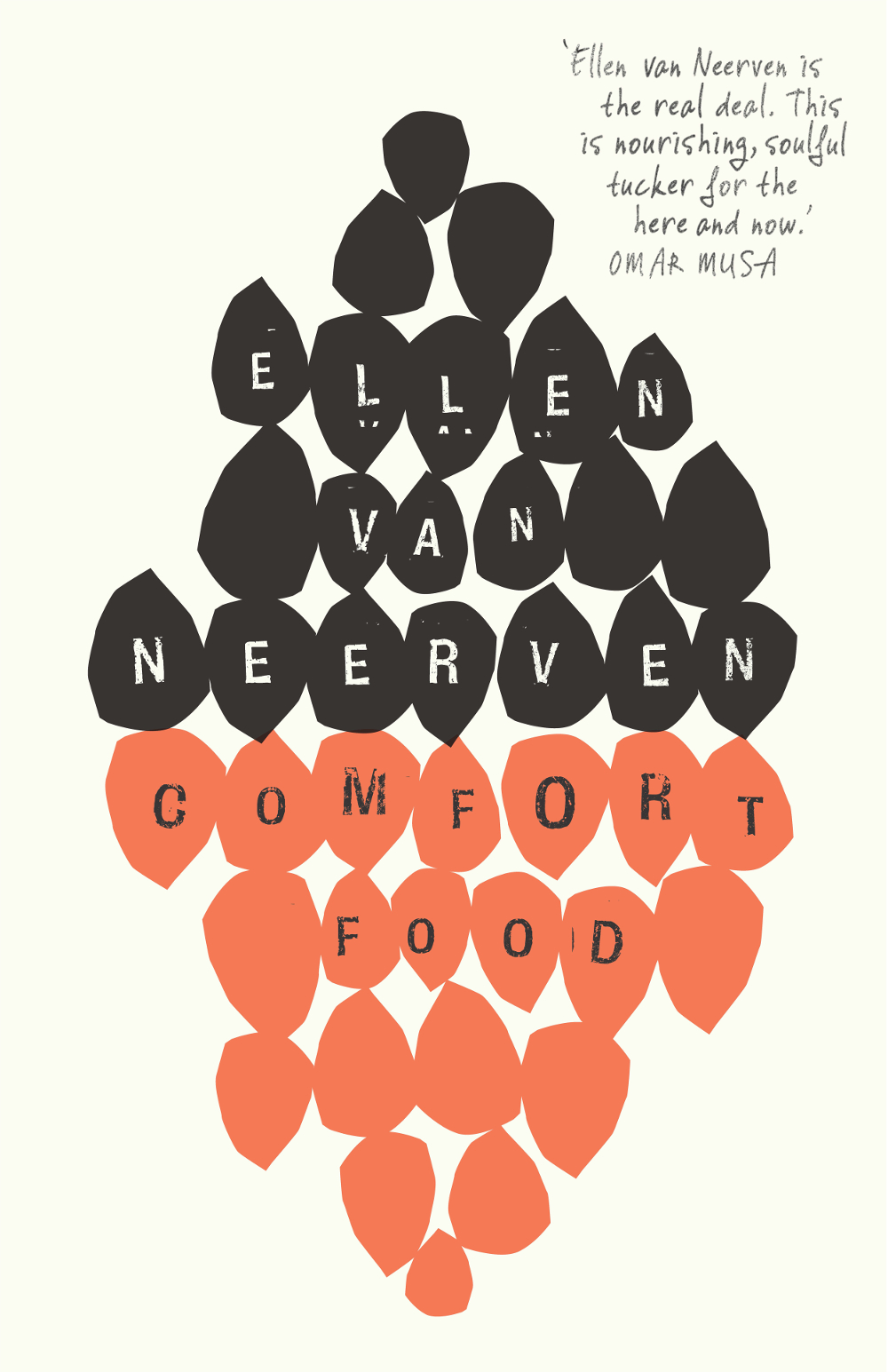 Poems about food, such as those comprising Ellen van Neerven’s first collection Comfort Food, are often framed in terms of ideas of connection, community, and commonality. Van Neerven engages directly with these ideas, but emphasises their fault lines as much as their strengths. The poem I keep returning to appears early in the second of the book’s six loose sections. Just called ‘Pie’, the poem is as sparse as its title:

There’s the temporal idea of regularity: something that recurs, happens often; and there’s the idea of what’s regular, what’s normal. In the poem this doubleness creates an echo, so that the final line – the loneliness – emphasises both meanings of the word. Throughout the collection, van Neerven uses repetition to transform simple language into emotional resonance, particularly to create powerful endings as in ‘ETA’ (‘This week’s just an ache, just and ache. It will soon be next week’) and ‘Stomach’ (‘a pain low is your gut / a pain higher is your heart’).

Often van Neerven’s pared-back diction belies a complexity in form. In ‘Pie’ the whole poem expands and contracts symmetrically, with regularity. As it moves from the speaker ordering the pie, to the action of driving and her hope that ‘her state of mind too will change’, the lines grow longer. The poem hinges on the word ‘but’ and the speaker’s realisation that her actions don’t ‘make her feel any more alive’. From here the poem peters out, the lines becoming shorter until they fade away entirely. The plainness of the language creates an almost regular prosody that, in this context, emphasises the commonality of the experience described and the futility of attempting the connection.

Part of how van Neerven is able to complicate and deepen the relationship between poetry and food is the wider context she establishes in more expansive poems. The first, five-poem section could be read as an epigraph for the whole collection. The opening poem ‘Whole Lot’, written in response to Emily Kame Kngwarreye’s painting Big Yam Dreaming, establishes an interesting framework for what follows. It firmly places food, and the collection, within a Dreamtime cosmology of the ‘family, earth / dingo, eagle / Whole Lot’, something van Neerven – whose Mununjali and Dutch heritage informs many of the poems – expands and troubles in multifaceted and irreducible ways.

The past year has been a welcome boomtime for debut collections of Aboriginal poets, van Neerven adding to the conversation of Alison Whittaker and Natalie Harkin among others. Outwardly, van Neerven’s poetry is not as invested in critical and literary theory as is the work of Harkin and Whittaker. Hers is also an ostensibly less experimental poetics, her drive to tell it straight more akin to her Mununjali countryman Sam Wagan Watson. Wagan Watson’s 2014 stand-out, Love Poems and Death Threats displayed his astuteness with the prose poem form, something shared by van Neerven. This makes sense considering van Neerven’s background as a celebrated fiction writer, most recently of the award winning Heat and Light. Van Neerven’s prose poems are shorter than Wagan Watson’s, demonstrating her ability to weave a narrative from the fewest threads:

Look, I’d be okay with a shit and a lie-down when I get to yours, thanks. Let’s not talk or do anything that could go wrong. It’s overcast and I can feel it mist into the train. The trees are so straight. I feel better throwing the city over my shoulder. This week’s just an ache. It will soon be last week. (‘ETA’)

As in her fiction, van Neerven’s poetics are strong in voice and narrative drive. In ‘ETA’ voice links the seven short statements of the poem into a story, which, like ‘Pie’, is one of ordinary pain.

Personal reflections on race occur in many poems, as in ‘Cousins’, where the speaker confronts how their identity might differ from other family members: ‘you asked me if you went to my school would / you be the only dark girl in your class / This was the first time I realised that / others could see us differently’. In ‘Dalgay/Yugambeh Death Poem’ the speaker encounters the same dissonance: ‘I don’t speak my language / but I speak yours // and I write it well’. These poems of individual reflection on race are paired with poems that reach outward. ‘Invisible Spears’, dedicated to Adam Goodes, highlights the hypocrisy of public responses to Black sportspeople: ‘we don’t need / a haka of whitefullas / just let us resist’. The standout ‘Chips’ blends the collection’s overall concerns of food with this resistance to racism:

Through repetition and careful framing, ‘chips’ in this poem transforms from the foodstuff, to stand-in for the wounding of genocide (‘what’s unmentioned’), while also being obviously linked to woodchips, the destruction of deforestation. It is a testament to the precision of van Neerven’s wordcraft that a poem ostensibly about potato can contain so many valencies. ‘Chips’ also again illustrates how van Neerven uses food to highlight separations as much as the more common, and potentially clichéd, togetherness. Food becomes a way of measuring distance. In ‘Bread’ the after-effects of a relationship are felt: ‘I’m not ready, not even for you / to commit to the $2 whole loaf’; and in ‘Pumpkin’, ‘I left Unc’s pumpkin in the car. I left it and I’m away from country’.

Pages: 1 2
This entry was posted in BOOK REVIEWS and tagged Caitlin Maling, Ellen van Neerven. Bookmark the permalink.
Caitlin Maling is a Western Australian poet whose first collection Conversations I've Never Had was released in 2015 and shortlisted in the Dame Mary Gilmore Award and the Western Australian Premier's Awards. A follow-up collection, Border Crossing is due out in February 2017.