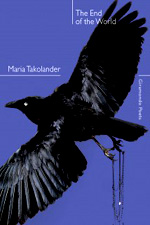 The End of the World by Maria Takolander
Giramondo Publishing, 2014

Maria Takolander has grouped the poems in this, her second collection, to isolate three slightly different impulses in her work. Because the central section is comprised of poems whose point of view underlies those of sections one and three, I shall deal with it first. All of its poems explore the dark and unforgiving nature of the world. This is the ground of Takolander’s imagination, and here it is unalloyed and unqualified. One group of poems explores the hard landscapes of Finland. ‘Missing in Action’ lists the fates which befell family members: ‘My great grandfather: lost to Stalin’s purges … My grandfather: his heart stopped on the swampy farm in Mellilä/where he dragged up life from the earth after the war … My grandmother: dead soon after she got an electric stove.’ The title poem, ‘The End of the World’, is an impression of Punta Arenas, in Chile:

Of these expressions of bleakness, one of the most powerful in terms of the nudge and rea-lignment of perspectives – is ‘Convicts’:

Contemporary lives, no doubt, are hard enough. But they are rarely so overwhelmed by the pressures to survive as those of their forebears. Where we have found relief from the worst of these pressures, poets have become fascinated – and appalled – by what seem like the impossibly unforgiving conditions their ancestors had to endure: by how close these conditions still are – and how soon we forget them. One iconic poem in this respect is Philip Larkin’s ‘The Card-Players’:

But Australian poets – not surprisingly, when one considers our history – have also been drawn to the tension between lives defined by the conditions of survival, and those in which choices – and even aesthetics – might be possible. Sometimes the tension is implicit, as in the Larkin (the brutality receiving no commentary, but set, nevertheless, against the act of writing), and sometimes it is articulated. In Dorothy Hewett’s late poem, ‘The Brothers’, she imagines:

This is a context not just for her poetry, but for her emotional life. There are many other ex-amples. The whole of Judith Beveridge’s ‘Storm and Honey’ is a meditation on the way the savagery of fishing occurs in an environment of great beauty. One might cite Julian Croft’s ‘Labour and Capital’, about impossible working conditions in the Newcastle of ‘the prosperous fifties when all was well’.3

One feature that Takolander shares with the poets above is that the sophisticated eye is not comfortable gazing at the life it can no longer bear to inhabit. Occasionally, the moral dis-tance is large and straightforward, as in the superb ‘Stalin Confesses’, which attempts to make sense of the paranoid brutality of one of the last century’s key figures – ‘certain only of death,/more biddable than life,/and of how it makes all men sorry’ – by imagining the angry child that goes with him everywhere. Mostly, however – with the exception of some of the poems in section three, which will be discussed below – she, like the others, knows that the distance between observer and observed is not so great: this is a destabilisation – an edge – informing all the stronger poems.

This bleakness continues in part three, but with a slightly different inflection. Instead of a direct confrontation with the unrelieved nature of the world and its inhabitants, the poems focus on grotesque behaviour. There are synopses and exhibits from the world of ‘Cesare Lombroso, Criminal Anthropologist’:

There is the story of how the housemaid’s daughter at Curtius’ Waxworks, during the Paris of the Revolution, learnt to take casts from the heads of the guillotined (‘Show Business’). There is a poem about how Charcot’s patients at the Salpêtrière – the hospital to which Di-ana’s body would be taken – had to learn to survive in their brutal, sexualised surroundings (‘Charcot’s Patients’). Instead of being responses to an unforgiving universe, these are stories that Takolander has either gone looking for, or has seized on with the confidence that they contain material she can turn into a poem, and the poems are marginally less strong because of it. They are still good poems, particularly ‘Charcot’s Patients’ and ‘Golden Sigi: An Advertisement’; but they contain just the slightest element of writing for effect – an impression that the author knows what horror is, and that she knows where to find it. Much of Takolander’s sense of the poetic is bound up with the articulation of uncomfortable things: sometimes, there is a stronger sense of this being an inevitable response than at others. Many of the poems in section three concern the appalling practices of early scientists. They do bear repeating, particularly when they are repeated as well as this, but their awfulness is an argument that has been put and won, and the skill and inventiveness of the poems is just that tiny bit undermined by the fact that these are reliable sources of horror.

Pages: 1 2
This entry was posted in BOOK REVIEWS and tagged Maria Takolander, Martin Langford. Bookmark the permalink.
Martin Langford’s most recent collection is The Human Project: New and Selected Poems (Puncher & Wattmann, 2009). He is the author of Microtexts (Island 2005), a book of poetics, and the editor of Harbour City Poems: Sydney in Verse 1788-2008 (Puncher & Wattmann, 2009).