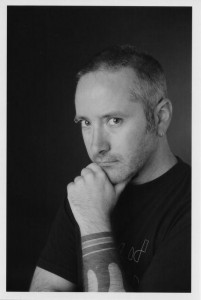 Richard Watts, creative director of Express Media's (producer of the youth literary magazine Voiceworks) has stepped down. Paul Mitchell reports on Richard's five years in a job that he describes as the best he's ever had.

At the end of June, Richard Watts, 3RRR Smartarts presenter and former Pink Magpies president, will resign as Artistic Director of Express Media. His five years with the organisation that produces Voiceworks, a national literary magazine for writers under 25, and the Emerging Writers' Festival, has been a time of positive change.

Submissions to Voiceworks have increased 100 percent in the past five years and now routinely arrive from all over Australia, rather than predominantly Victoria. Subscriptions and sales have increased each year (more than 11% in the past 12 months). And, no small thanks to his media contacts, Richard has been able to also help boost Arts Victoria funding for the organisation from $80,000 to $95,000 annually, and Australia Council funding from $10,000 to $18,000. But that's just the icing on the cake for Richard: the real success has been helping young writers to take themselves seriously.

“It's been enormously rewarding,” Richard says. “It's been the best job I've ever had and it's been fantastic to be able to help spark young writers' careers.”

He cites the example of a young writer who was working on a novel, but after taking it to a publisher and having it rejected he was about to close down his computer screen and stop writing.

“On the building site where he worked, he was copping lots of shit for being a writer,” Richard says. “He got in touch with us and within six months Christos Tsiolkas was mentoring him and helping him polish his manuscript.”

Richard said Voiceworks, due to its age restriction, was a natural target for teenage angst poetry. But he said sometimes works of genius appear ? and staff had to ring relatives to make sure the person is really under 25.

“Simon Cox, a 16-year-old from Perth was one,” Richard remembers. “We were able to get Arts WA funding to fly him to the National Young Writers Festival in Newcastle last year . . . We kept taking him into over-18 only areas and had to remember we couldn't . . . we had to say, You go back to your Mum!”

Watts said it had been exciting to oversee Express Media as it has become a truly national endeavour. He said the most important role the organisation can play is to help develop a sense of community among young writers, many of whom are isolated from each other, whether they're in city or country areas.

The Emerging Writers Festival, Richard's brainchild, is another way he has made a push to develop a national community of young writers. The Festival, which ran for the second time this year and included participants from all over Australia, has run under the banner “The best writers you haven't heard of yet”.

“While the Melbourne Writers Festival supports established writers, we wanted to remind the public that there are lot of great writers out there who are, for one reason or another, not being published.”

His achievements have been invaluable, but Richard decided it was time to move on this year, both to concentrate on his own writing and because he believes an arts organisation always needs a fresh transfusion of ideas.

“Rohini Sharma has been appointed the new Artistic Director,” Richard says, adding, “She has a background in youth theatre in the ACT, she has worked in the Arts Council England's grants department, and she's helped small groups of, often, underprivileged people get arts projects up and going.”

While Rohini will soon be slaving over a now-hot magazine and arts organisation, Richard will be working feverishly on a fourth draft of a novel, a play, a film script and, well, while he's at it, another novel. “I've got files full of ideas and now I'll be able to get to them,” he laughs.

Before all that he's planning a month off. Oh, and he'll dash over to Scotland for a working holiday at the Edinburgh Festival at the end of the August where he hopes to pick up some contacts for the Melbourne Fringe Festival – Richard is the deputy chair of Fringe. “I'll also be doing my DJing and working on my freelance writing – and I also want to sleep!”

For more information about Express Media and Voiceworks magazine go to www.expressmedia.org.au.

This entry was posted in INTERVIEWS and tagged paul mitchell, Richard Watts. Bookmark the permalink.
Paul Mitchell is a poet, novelist and essayist. His novel, We. Are. Family. (MidnightSun Publishing), was published in 2016, and his third poetry collection, Standard Variation (Walleah Press), was short-listed for the 2016 Adelaide Writer’s Week John Bray Poetry Prize.