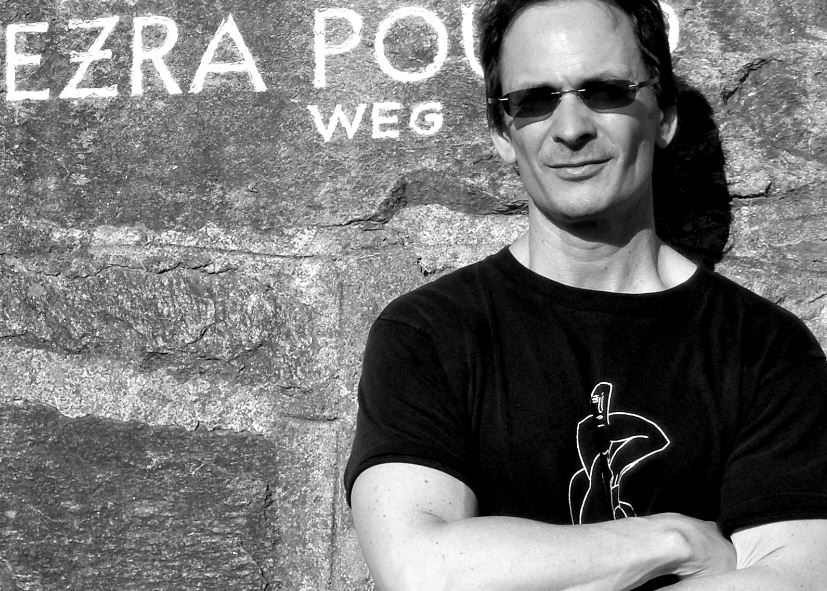 ‘Evening covers their shadows, your / eyes cut the evening.’ Forrest Gander was born in Barstow, California in 1956 and raised in Virginia. His books of poems include Core Samples from the World (2011), Eye against Eye (2005), Torn Awake (2001) and Science & Steepleflower (1998). ‘Wind- / blown sands scarf the road.’ Ranging from verse to prose poem, novel and essay, Gander’s work includes travel writing and reflection on geology. ‘I was looking for bonds. I wanted to break a mirror. I wanted to render myself accessible, available. I wanted to borrow eyes from another language. I was looking for the words to come.’ For many years co-editor with C.D. Wright at Lost Roads Publishers, Gander has also done extensive work in poetry translation, publishing English-language volumes of the works of authors Kiwao Nomura (‘Manhattan / is to approach Manhattan’), Jaime Saenz, Coral Brancho, and Pura Lopéz-Colomé. I interviewed him in July 2013, in Petaluma, California, as part of the Australian Research Council project ‘Understanding Creative Excellence: A Case Study in Poetry’. The interview was revisited and revised by us both in May 2014.

Paul Magee: What do you see as your prime points of connection to the world?

Forrest Gander: I like this question, because I think of poetry in terms of its connection to the world. One of the philosophers who is most important to me is Merleau-Ponty. His notion is that we’re connected through our bodies to the world. There is no Cartesian ‘I think therefore I am’ vantage-point on things, because thinking is already an engagement with world. George Oppen – who’s also very important to me – says:

I like this notion of what we ‘stand on’, because it is both a physical thing and an ethical thing. My background in geology trained me – as well as teaching me to read carefully – to look for the structures we stand on.

PM: Geology taught you how to read carefully. Can you expand on that?

FG: In geology you might be looking on a micro-level at the structures of crystals, discriminating patterns. Or you might be studying the stratigraphy of a landscape. In either case, it’s about being able to figure out relationships in order to gain a fuller sense of what you are engaging, what has happened. You’re considering juxtapositions and unconformities and you’re determining correspondences. You can find something similar in poetry. It’s one of the things that most interests me. Clifford Geertz refers to ‘thick description’ in anthropology: I’m interested in the thickness of perceptual experience conveyed by poetry. Not just reading the theme or the melodic line, but appreciating everything that goes into making the semantics and music possible.

PM: So does this mean that for you poetry is where the connection to the world is more apparent, or perhaps even more palpable?

FG: Yes. I think that poetry is one expression of a mode of being in the world; and the kind of poetry that I’m most interested in is adept at revealing the complexity of that involvement in the world.

PM: My second question has to do with what type of poet you might describe yourself as, assuming you were happy to engage in that sort of self-characterisation. You might for instance call yourself a ‘North American poet’. Is there any such descriptor you would be happy with?

FG: Although all of me, my thinking, everything that’s been important to me, has come out of poetry, I’m less and less interested in thinking about poetry as a discrete genre. Someone like Edmond Jabès: his writing ¬– what is that? It’s not poetry for a lot of people. So I tend to call myself a writer instead of a poet.

That said, sometimes I really insistently want to make the case that there are people in the world who make the choice to be poets. In some companies, I’ll assert ‘I’m a poet’, but almost as an irritant for those for whom that assertion has no reality. Pound has a poem called ‘Salutation the Second’ in which he says by all means go up to the houses of the rich and jingle their bells:

PM: You’ve just mentioned a certain type of poet who proclaims the fact, or maybe I should say insists on the terrain …

FG: It’s about insisting that there is a terrain. Poetry’s so outside the interests of our culture, that I do want to insist to the proctologists and investment bankers, to the people who presume they’re doing the important work of the world, that there is this other thing that’s real, that I care about.

PM: Were you taught poetry at school?

FG: I don’t remember studying poetry until high school. Then I just lucked out and had a fantastic teacher who turned me on to Wallace Stevens. So, in elementary school, no. But early on, my mother read me poetry. She was a fifth grade teacher, and from my earliest years, she read me Edgar Allan Poe (I was enthralled by ‘the tintinnabulation of the bells, bells, bells, bells’). And Carl Sandburg. Her father, a Swede, would wake up and strut around the house reciting 19th century poems he loved, narratives and dramatic monologues. So through my family, poems were part of my life from early on – but not through school.

PM: Was it that your school experience with Wallace Stevens just opened up another author then?

PM: You spoke a little about your tertiary education in geology. Do you think your early education in poetry spoke to that training?

FG: It did. My sense of the poem isn’t like Spicer’s: it’s not about catching radio transmissions from Mars. It’s very connected to the world. It’s a listening to the world. And not just to the human world. Geology – this may sound strange – is also about listening to the world. And certainly it’s about looking at the world. Before geology, I was obsessed with biology. I grew up, raised by a single mother and two sisters. Our house was full of terrariums, with muskrats and snakes and leeches, salamanders and ant farms, because we lived near a forest in Virginia. My grandfather, who was really the only male influence on me in my childhood, was a very outdoors person. He would take me for a walk and we would tap, tap the ground with a stick in a certain way that would call earthworms to the surface a half hour later, because they thought the tapping was rain. That was his theory. We would come back to collect them. I remember him doing things like that, his attentiveness. He kept incredible journals of birds since his childhood. They are really beautiful.

FG: Notes, lists, descriptions, drawings. So my interaction with the outside world, which was often a rural world, was very much a part of my poetics. It became an interesting friction point when I encountered L-A-N-G-U-A-G-E poetry in the late ‘70s and early ‘80s, on moving to San Francisco. It was a relentlessly urban poetics. Perhaps you’ve heard arguments like Marjorie Perloff’s that the only writing that can count now must emerge from an urban situation. And so one of my ways of navigating poetics was through the friction between those arguments and the kind of experience I’d had as a child.

PM: Let me ask you some questions about the community of voices around the composition of your work. Are there, for instance, people that you show poems to prior to publication?

FG: Early on, I had more of a company of friends with whom I shared work. One of the difficult things about the job I’ve come to have as a professor, and also because I edited a press for a long time, is that I became inundated with manuscripts. I felt like I had some talent at critiquing work and offering advice to others, that I was useful to them. But more and more people approached me with requests to read their work, and it became unmanageable. In weird consequence of that circumstance, I began to find it unbearable to send my work to anyone else, because I imagined that if they were as inundated as I was, it would be a burden, rather than the pleasure that we started out sharing.

So I don’t show my work to anyone now, but it’s only for that reason: I don’t want to burden others whose need for time and space I respect. I still read an enormous number of manuscripts.

PM: When you’re reading manuscripts in an editorial capacity, does that feel like the same process as reading your own work? Are you using the same eyes?

FG: My first impulse is to say that I can’t ever get that kind of objectivity on my own work.

But it’s also that I’m judging other people’s work by what the work asks from me. I am judging it by what is particular to that person’s poetics. My own work is connected to my own poetics. So they’re different kinds of critiques. It’s the same level of intensity, the same act of intensely inhabiting language, I think, for me to closely read someone else’s work, as it is for me to write my own.

To extend that even more, I’d say that to translate work is a similar act. In each case, one’s subjectivity has to disappear for some period. The self goes away and in its place there’s a responsiveness to what’s there and what might be there. It doesn’t have to do with ego.

Pages: 1 2 3
This entry was posted in INTERVIEWS and tagged Forrest Gander, George Oppen, Paul Magee, Robert Creeley, Wallace Stevens. Bookmark the permalink.
Paul Magee is a poet and researcher in poetics at the University of Canberra. He is author of Stone Postcard (John Leonard Press 2014), Cube Root of Book (John Leonard Press 2006) and the ethnographic monograph From Here to Tierra del Fuego (University of Illinois Press 2000).


More by Paul Magee on Cordite Poetry Review →
Forrest Gander, a writer and translator with degrees in geology and literature, taught for many years at Brown University. Recent books include Be With, winner of the Pulitzer Prize, and The Trace, a border novel. Gander has translated books by many poets from Spain, Latin America, and Japan. He lives in California.