A Writing Surface of One’s Own

for Tricia Dearborn, whose desk is a door

A waitress here has The Owl and The Pussycat tattooed on her goose-pimpled biceps. They sweetly peek from the hem of an unseasonable short sleeve. Indigo-inked, theirs is a nursery frieze’s block print detail. She is all at sea in her ravaged pea-green tights. Her roughly made skirt abounds with floating, shifting dice. It retains its looped yellow fringing, a faded tangelo backing, from its vintage past life as a painted velvet souvenir cushion cover. She has a ring at the end of her nose, her nose, a ring at the end of her nose. Her girlfriend’s lips, hair and boots are cerise. With honey, she sweetens – and makes a meal of – her sweetly gratis hot tea, blushes like a peach, purrs. The illustrated waitress hovers, calls ‘Who?’ and, like a zephyr, swoops with a cloth, a notepad and a fluffy rainbow-haired Troll Doll-ended pencil. 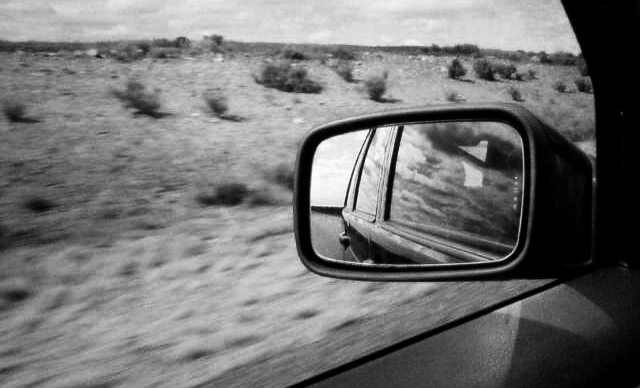 Random café tables contribute to my itinerancy and are, more often than not, my sole writing desk. This one’s sticky surface has been covered with a square of ivory vinyl, printed in black with lacy antique catalogue kitchenalia, or it is one of the intimate snug-style benches where sitters slide in, sit side-by-side, thigh to thigh, or opposite, knee to knee, nose to nose, where legs mingle, clasp, grasp. There must be space to spread one’s elbows.

In Lyndall Gordon’s book about Emily Dickinson’s ‘loaded gun’ life, a small photograph, attributed to Jerome Liebling, places Dickinson’s writing desk neatly against a wall beneath the window in her bedroom (from which she could see the path that led to her brother’s house), to the right, like a postage stamp. It was eighteen square inches of writing surface. (This small café table is almost twice that. I spread my elbows.) A rush seat chair is beside it. Through the closed door of this room, is reputedly, the only way Dickinson would speak to visitors towards the end of her life. A fly in this room has crept into our consciousness.

Her desk is highly polished (mahogany?) and taper-legged – a pedestal. It is more of an occasional table than a desk. It is not a table you could reliably stand on. You could invert it and balance it on your head. It is a perch for a wild, lit-up mind, a crow’s-nest, a shrunken tea chest floating in the ocean, a dancing dog called Love, its ballast – it does/it does not wear a spangled skirt.

Online there are countless photos of enthusiasts, with a supposed affinity, posing with their laptops on such a table, or on ‘the’, ‘her’ table – it’s hard to tell and easy to cringe, but it does touch on the initial thoughts I had had reflecting on the size of her desk and the shortness of her always undated, untitled poems, the whisper-intimacy and romance of her many mildly salacious drama-driven letters, the impassioned fun of them, the ecstatic ‘Emily and God’ of them. Many poets’ work seemed to shrink in accordance with their 1980s purchase and seduction/conversion (correction, revision were suddenly all too easy) to the word-processor screen. We inhabit our screen, work within our surface.

Onto this concentrated surface Dickinson feverishly wrote with both a consistent cursive delicacy and wildly idiosyncratic precursory dashes. There is a sense of not confinement, but containment. Her stream of consciousness is buzzing – a Circus has passed the house. Her rumoured epilepsy is somehow a subversive elation. She is self-contained. There is nothing of the victim here, their family’s was a language of endearments and pet-names, the conventional ‘distant father’ household was warm, they dealt with an omnipresent illness like any other, there were splits like any other; nor is there the misogynist’s saleable Nun of Amherst. There is erotic charge.

Annie Leibovitz’s extraordinary digital photograph of the last of Dickinson’s white dresses is included in her gorgeous book of self-renewal and inspiration, through personal homage, Pilgrimage. (Its open page width at its A3 fore-edge to fore-edge is, approximately – and by coincidence – eighteen inches. From ‘head’ to ‘tail’ is twelve inches; it is almost the equivalent square of Dickinson’s desk. It has 240 pages and, due to the net’s excess information, we can readily know that it weighs 1585g.) I stress the ‘digital’ because there is a heightened sight to it. It is ‘imbued with a bridal charge, bleach, it is the stiff shift of an ingénue, a mystic’ (from my preliminary notes). It is a plain, almost white lace, aspirant rickrack-trimmed simple cotton brocade with flat dizzying buttons from the sea. I wonder at its crisp cut and inflammability housing such a ‘volcano’.

I think of her doll-like rustling get-up – I imagine her itching in it – in that all too familiar, defining daguerreotype we all know – her flat-chestedness, large, useful, boyish hands, childish poker face (she had strangely declared herself ‘the only kangaroo amongst beauties’ ) and the occasion of it, she was sixteen-ish. She is a formidable girl, volatile and airy, like my nieces. She is pale, dark-lipped, dark-eyed and auburn, supposedly. To some, an ideal. From 1894, eight years on after her death at the age of 54, and to 1924, the enterprising Dickinsons had this image altered with progressing trends of froufrou. Apparently, this forever juvenile and stunted Dickinson, was and still is, good for sales. It defines the propagandist’s stereotype of the ‘stricken poetess’.

There is however another (contentious) daguerreotype of her, which surfaced in Springfield, Massachusetts, in 1995. ‘She’ is in her late 20s, and seated next to, to the right of, and with an arm around, an unknown woman in mourning black, or as suggested at Dickinson Electronic Archives, it is Kate Scott and she and Dickinson were ‘deeply in love with one another.’ Scott remarried in 1866. It is worth quietly noting here the interpretive historian’s/archivist’s minefield. The plots thicken in the Dickinson industry.

An analysis of the features, primarily of the eyes, has been (vaguely) verified and its validity remains contested. The site offers and provides comparison by ‘advanced computer opaque facial overlays’. A rose-tinted overlay of divisive wishful thinking. Although the nose and chin are doubtfully Dickinson’s I must bend to the crooked centre parting (through a cowlick – which I too possess and have passed on to both my sons), the wide brow, the curve of the eyebrows, the benign, dewy gaze, the full mouth. It’s a terrifically sensuous, pre-Raphaelite face. The visible right hand is large and capable – I am reminded of the clipped dimensions of her desk – it softly rests on the lap on her dark dress, which is not so different from the one, well-known, prevalent image’s. Here there are fringes on the upper (long) sleeves and the full gathering at the hips is pinched in with some intricate rows of work – almost exactly as the attributed ‘Emily’, perhaps this is an alarm bell or perhaps she was not a maverick in the fashion sense. It too has a prim lace collar.

There is an attributed online photograph in which she is described as ‘gypsy-faced’ (apparently another of her self-appraisals) from around 1860. There is another – or is it an adolescent Edith Piaf? – a gamine in stays. She has travelled far and wide on an American postage stamp.

I do not pretend or wish to be a Dickinson expert or scholar on the strength of the purchase (by my flicking through text, my focus on photographs) of a biography. Her tender truths remain, with respect, her own and the research by and conjecture of others just that, or by trawling through the spume of the net, or by my long love affair with her unflinching admission of not writing for others, her striding (barefoot) erudite thoughts on ‘fame’ regarding publishing advice (to delay it – 10 poems were published in her lifetime, 1,789 surfaced posthumously) and suggested changes, and my awe of, and her’s within, her writings. My interest here is in an unceremoniously deficient piece of steadying, enabling, (surely must be) scorched furniture, and its dimensions.

Also in Leibovitz’s Pilgrimage is, a few pages on from Dickinson’s dress, a double-page photograph she lovingly took from above, of Virginia Woolf’s desk at Monk’s House. (Leibovitz’s book’s binding is a blind debossed oatmeal buckram. It has the same organic frisson as Woolf’s desk. Its wraparound dust jacket is a glass-green Niagara Falls). By trapeze? Tripod? As a piece of furniture it is basic and functional; it has a mongrel efficiency and integrity. Its wood is bare. (As was her lap desk onto which she had glued an inkstand and on which she would write first drafts in the morning in a slumped armchair. She typed, revised and retyped at her desk later in the day.) It looks as though a hutch fitting with slats for hidey-holes has been removed to make more space at its rear. There are stains, clusters of rings from ink bottles, smears of paint, vague ink doodles – a bird, a woman’s face, disappearing trailings – woodworm holes, almost indiscernible dull brass corners which once, I guess, squarely fixed a morocco or baize writing surface. Essentially, it is a piece of serviceable plywood. It is the delicious desk of a well-heeled socialist. It could be resting on two sets of doubly stacked milk crates. It is the desk of an Amazon. Its vocation, application and daily disciplined praxis are a levitation, transcendental. I imagine a pocket-sized river stone on each corner, to keep it down. A Persian rug on bare floorboards is beneath it, a rush seat chair is beside it.

Leibovitz’s notes include, from Leonard Woolf’s memoirs , a description of Virginia’s writing studio/‘lodge’, her ‘room of one’s own’, a greenhouse shed, in the back garden in Rodmell in East Sussex. (Monk’s House had been their ‘cottage’ since 1919 and became their full-time residence after they had twice been bombed out of their London home by 1940. Leonard remained there until his death in 1969.) He reports that it was ‘not merely untidy but squalid’. The National Trust keeps it spotlessly clean. It’s a 1980 reclaim after subsequent uses.

A sensual friend of mine has visited Monk’s House and stuck her finger in the garden where Woolf’s ashes are buried under a tree, and licked it, hoping for some stray and persistent molecules ‘of Virginia’. She didn’t walk to the river, as I would have. She ate a small apple from a tree at the Bells’ Charleston, the Bloomsbury Group’s utopia.

I meet with a precarious, presumptive analogy – Woolf was to the desk what The Ouse was to Woolf. There is a whiff of inundation.

Perhaps she pressed an ear, a cheek to it like a lover’s back to loosen thoughts, perhaps she impassively watched cigarette smoke trail from her fingertips for hours, scattered, like reeds, the surface debris, her used matches and broken cigarette holders, etc, maybe she couldn’t even manage one of her warm, newsy and brusque letters to a friend. She loved her incandescent Bloomsbury Group ‘circle’. Her family life was a mix of traumatic early losses (her mother at thirteen, step-sister at fifteen, father at twenty-two, brother at twenty-four), incestuous toxicity and stalwart consolation. Her widely spaced sharp script slopes and thickens with an impressed nib by lengthy letter’s end. Is that ‘Lytton [tt uncrossed] is as mellow as a pear.’? Is that ‘L. & I are now going to cook eggs & bacon on the gas stove…’? This sifted from Google Images.

Pages: 1 2 3 4
This entry was posted in ESSAYS and tagged Annie Leibovitz, Emily Dickinson, Meredith Wattison, Virginia Woolf. Bookmark the permalink.
Meredith Wattison, born 1963, is a poet and essayist. Her six books of poetry are Psyche’s Circus, Judith’s Do, Fishwife, The Nihilist Line, Basket of Sunlight and terra bravura, shortlisted for the 2016 Kenneth Slessor Poetry Prize. Her recent essays have appeared in Cordite Poetry Review, Rabbit, Plumwood Mountain. The 2016 anthologies, Contemporary Australian Feminist Poetry and Contemporary Australian Poetry feature her work. She is the winner of the 2017 Gwen Harwood Poetry Prize.