Thinking about that idea you mention from Jenny Odell, ‘bioregionalism as a redirection of attention’, her being drawn to birds and plants, to sociology and garbage. When I had the artist residency at Hill End in 2010, these were exactly the markers of place that I was drawn to. I made drawings of the paths of animals, mainly birds, in relation to the geography; I started a project (as yet incomplete) looking at the movements of insects in relation to remnant fruit trees from the original settlement; and I began to compile the small inventory of shards of china and glass that lay scattered about the top soil around town. At the time it occurred to me that the ghosts of Hill End inhabitants might be amused, or at least bemused, by the degree of attention I was paying to these broken, castaway fragments of their rubbish. Random bits of glass and ceramic bottles and jars and crockery. But for me finding these century-old traces of other people’s lives so close to the surface of the everyday was something unexpected and remarkable. Looking back now, I can see how this sketchbook project echoes John Berger’s observation of how ‘[o]bjects no longer confront us. Rather, relationships surround us. These can only be illustrated diagrammatically’ (n.pag).

Ironically his schematic approach would become the basis of my entire visual arts thesis, which back in 2010 was only in the early mist of thought-gatherings, combined with the thicker fog of new motherhood. I would go on to explore a landscape closer to home through applying the same methodology of diagrammatic inventory. Both sites involve a form of excavation through attention. 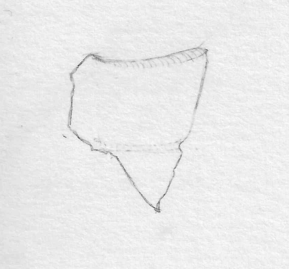