Canada has had a wide array of small literary publishers over the past few decades. Most notably, the small press explosion in the 1960s created small presses such as Coach House Books, blewointment, Talonbooks and Oberon Press. These days, some of the most compelling works of poetry and fiction in the country are produced through presses such as Toronto’s Coach House Books, BookThug, House of Anansi Press and Mansfield Press, Vancouver’s Talonbooks, CUE, Arsenal Pulp, Line Books, New Star Books, Anvil Press and Nightwood Books’ blewointment imprint, Edmonton’s NeWest Press and University of Alberta Press, Calgary’s Freehand Books, Montreal’s Snare Books and Nova Scotia’s Gaspereau Press, among plenty of others.

There are quite a number of micro-presses across Canada that have been producing smaller-run items, hand-made and otherwise limited-edition books and chapbooks that rarely make their way into bookstores. These are distributed through individual hand-sales, small press fairs, mail order, trades, or the gift economy of producing small press works. One of the interesting features of many chapbook publishers across the country (most likely similar to publishers in other countries) is in the number of presses started by writers themselves. Often (but not necessarily), these start as self-publishing ventures that expand, whether as initial concept or further down the line, to producing work by others.

Originally, I sent a series of questions to about a dozen small and micro publishers across the country, but only a handful were able to respond, providing only a fraction of what is a much larger canvas of Canadian writing and publishing. Apart from the publishers featured here, a more expansive list (not pretending to be complete, by any means) might also include: 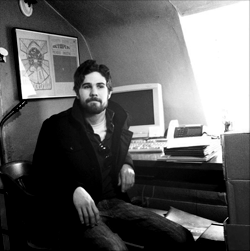 On August 24, 2011, when Apt. 9 Press publisher/editor Cameron Anstee hosted a launch of his two most recent Apt. 9 Press titles – Leah Mol’s And I’ve Been Thinking Dangerously and Justin Million’s HADRON – he mentioned the possibility of the press taking a temporary break. He expands on this in an email: ‘I’ve just started a PhD in English Literature and want to get settled into that before returning to publishing. In the longer view, I’d like Apt. 9 to be around for many years. The books are demanding of my time, energy and focus. I don’t want to give them half of what they deserve because my attentions are elsewhere. A few months or a year being quiet will not seem such a long time ten years from now.’

Over the past two years, Ottawa poet Cameron Anstee has produced nearly two dozen titles in a series of limited-edition chapbooks and broadsides of poetry, fiction and non-fiction. Each are hand-sewn and numbered in editions of 50 copies. Apt. 9 Press has published single-author collections by writers such as Sandra Ridley, Stuart Ross, Michael Blouin, Michael Dennis, Leigh Nash, William Hawkins, Ben Ladouceur and Monty Reid. Copies are distributed at venues such as the Ottawa small press book fair, Toronto’s Meet the Presses, Ottawa’s VERSEfest, and reading series including The TREE Reading Series and the In/Words Reading Series, as well as through Apt. 9 Press’ own launches throughout the city.

It has been interesting to watch the development of small press in Ottawa over the past decade or two, with publications over the years from Amanda Earl’s AngelHousePress, Christine McNair’s cartywheel, Steve Zytveld’s Dusty Owl, jwcurry’s 1cent/Room 302 Books, Adam Thomlison’s 40-Watt Spotlight, Grant Wilkins’ The Grunge Papers, and Rod Pederson and Rona Shaffran’s The TREE Reading Series, among others. In his ‘12 or 20 (small press) interview’, Anstee talked about being at Carleton:

My introduction to small press publishing came during a Canadian Literature survey taught by Prof. Collett Tracey during the second year of my undergrad. She gave a lecture on [Raymond] Souster, [Louis] Dudek, [Irving] Layton and their Contact Press that absolutely floored me. I’d never heard anything like it and couldn’t understand why they didn’t teach THAT in high school. From there, I became involved in the student-run campus little mag and chapbook press (In/Words at Carleton University).

When my time at Carleton was drawing to a close, I was hooked and needed to start something of my own to keep myself in that world.

An Ottawa native, he recently completed a M.A. in English Literature at Carleton University, writing a history of the infamous Contact Poetry Readings, which is considered the first poetry reading series in Canada (‘Because it brought the world to us:’ A History of the Contact Poetry Readings (1957) 1959–1962). While at Carleton University, In/Words Magazine and Press published his own work, and later he edited publications by newer writers, including Jesslyn Delia Smith. According to their website, founded through the English Department in the fall of 2001, In/Words ‘…began as a reaction to a first year seminar course taught by founder Professor Collett Tracey in which students were encouraged to write.’ They now produce an ongoing journal, and a small stack of chapbooks of poetry and fiction, all distributed for free, as well as various incarnations of regular readings and writing workshops. In many ways, Anstee’s work with Apt. 9 Press could be considered a continuation of the work started at In/Words, furthering and maturing the lessons begun through Carleton University’s English Department, and his own published writing, none of which has appeared with Apt. 9 Press, includes the poetry chapbooks Remember Our Young Bones (Ottawa ON: In/Words Magazine & Press, 2008), Water Upsets Stone (Toronto ON: The Emergency Response Unit, 2009), Frank St. (Ottawa ON: above/ground press, 2010), She May Be Weary (Ottawa ON: St. Andrew Books, 2011) and The Turning of Pages Should Not Be Audible (Ottawa ON: St. Andrew Books, 2011).

Despite the scheduled break, it’s completely impossible to remain partially in publishing; in December, 2011, it was announced that one of Anstee’s titles, Claudia Coutu Radmore’s Accidentals (March, 2011), had won the bpNichol Chapbook Award. ‘I’ll be in course work until next summer. I’d love to come back with a new project or two in time for the summer small press fair(s). That being said, I don’t have anything firmly set in my mind. When I have the time, and more importantly the right project, Apt. 9 will be active again.’ He continues, saying, ‘I’ve been thinking about different ways of binding, longer projects, shorter projects, more broadsides, more non-fiction, and on and on. I’ve also got an always-growing list of people I would love the privilege of publishing, local and wider. Thinking again about a longer view, I’d like variety and depth over the lifetime of the press. These first two years have been wonderful, with sixteen books, two broadsides, and a non-fiction folio. I’m actually amazed that so much was produced, and I remain proud of each title. I want to maintain that feeling of pride in each project, and also keep the process interesting and challenging for myself.’

Pages: 1 2 3 4 5
This entry was posted in ESSAYS and tagged publishing, Small Press. Bookmark the permalink.
Born in Ottawa, Canada’s glorious capital city, rob mclennan currently lives in Ottawa. The author of nearly thirty trade books of poetry, fiction and non-fiction, he won the John Newlove Poetry Award in 2010, the Council for the Arts in Ottawa Mid-Career Award in 2014, and was longlisted for the CBC Poetry Prize in 2012. His most recent titles include notes and dispatches: essays (Insomniac press, 2014) and The Uncertainty Principle: stories, (Chaudiere Books, 2014), as well as the forthcoming poetry collection If suppose we are a fragment (BuschekBooks, 2014). An editor and publisher, he runs above/ground press, Chaudiere Books, The Garneau Review, seventeen seconds: a journal of poetry and poetics, Touch the Donkey and the Ottawa poetry pdf annual ottawater. He spent the 2007-8 academic year in Edmonton as writer-in-residence at the University of Alberta.

One Response to Notes on Five Canadian Small (micro) Publishers